Edit: I added links to YouTube vids for the major music references. Go and enjoy.

I'm going to try a little something different. Between Amar's quickie recaps within 30 minutes of game end and the later Jazz Quartets, these longer reviews need something more to make them relevant, I think. So I'm experimenting with form and depth a bit. We'll se how it goes. And yes: I'm going to keep going with with music motifs and see where they go.

Overview of the Gig

It was a bit of a schizophrenic performance. What else do you call it when the headliners begin with some elevator music, the second-stringers start riffing off Beethoven's 5th via Bass Trombone and Electric Guitar, CJ finds his inner Johnny Hodges, and it all ends as Devin trips on the cables—and the microphone falls off the stage right before one last jam could save it all.

No, it wasn't the best game of the year (that, to me, was Sunday's win in Denver), nor the most fun (Clippers). But it was without question the best Game Thread-Twitter-Watch with a bunch of buds experience of the year. Seriously, we got everything:

I could go on. Really, as far as giving us the full fan experience, this game pretty much gave us everything. So let's now look back at the different quarters. Or, in Jazz quartet playing at the club lingo, the four sets:

The rest after the jump.

We've had two huge wins in a row. The defending champs are coming into town, and they have to be angry (losing their third game of the year off a last-second shot by someone almost dead the night before). We want a rumble. We want Charlie Parker or Dizzy Gillespie. We want a sweet Boss Brass jam.

And out come the Jazz playing "Kenny G's Leastest Hits, arranged for Alto Clarinet and Recorder Ensemble." I'm being too harsh. Paul Millsap came out with his Bari Sax ready, gave us four points in a minute-thirty (with a nice Al jumper off a Hayward assist between)—then Devin pulled the alto clarinet and said "how about some Kenny G now?"

It took another 3 minutes to get down 12-6. Four missed jump-shots, and a Hayward 2-foot-clank. Listless eyes, listless feet on help defense.

Nice Pick set by Dirk. Delone West using the screen very well. However, Jazz are in position to counter. Millsap's ready to slow West, Al's two steps from the basket if needed, Hayward and Raja are in good spots to cut off passes if Al helps. 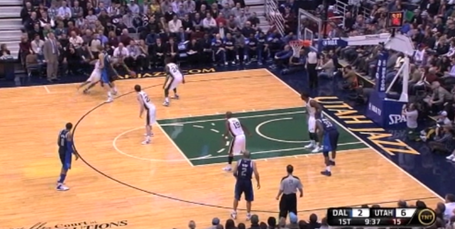 Next, the Lazy D starts to happen: West has now moved about 7-8 feet. Nobody else has moved at all (he did do a little shoulder fake to freeze Millsap—it was a nice little move). 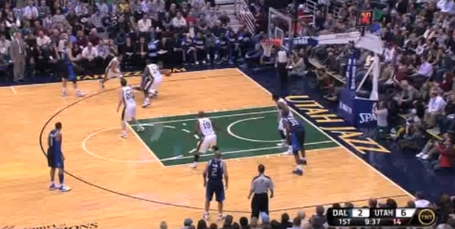 Now Lazy D gets quite bad. Harris gives up, but makes no attempt to cut off possible passes to Nowitzki. Gordon needs to shift about three feet to cut off the passing lane to Marion, but Hayward's doing awkward teenager standing impression. Al's still two feet from the basket—now's the time to make a move. And Raja. RAJA! Will you look at Raja! Our one shining star here. He's shifting into the best position to disrupt passes to both Kidd AND Haywood when Al moves to protect the basket. 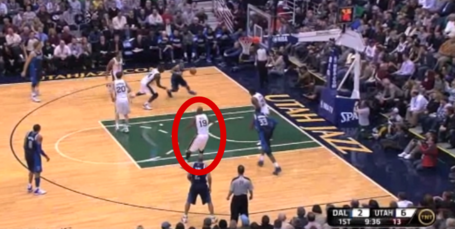 Except Al doesn't make a move to protect the basket. Sap's beat and helpless. Devin and Hayward are still standing in beautiful spots if the goal is to provide easy passing lanes. Raja's position is no longer perfect, but hey at least he was in the ballpark. 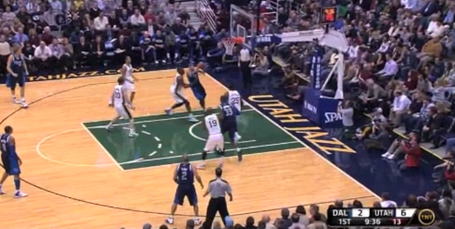 Here's the play in real-time:

Anyway, after those first 6 points, this was what the Jazz decided to do for a while. Devin, of course, was the worst of the bunch.

But then things started to change. Why? Because Ty started going to his bench. At the six-minute mark CJ checks in for Gordon. Jazz start scoring again. Yay! But so is Dallas. Boo! They're still down six. And then ... and then ... and THEN ... with 4:35 left in the quarter in come Earl Watson and Alec Burks for Devin and Raja.

The Jazz get energy again (even if Alec's energy was, at first, not exactly efficient). They made a mini-run. They decided to get good scoring opportunities for Al, Sap, and CJ. They decided Dallas should be taking more difficult shots. And they finished the quarter down just three.

It's all subs now. It's mostly kids. They play like a junior high jazz band sight reading "In the Mood." Lots of enthusiasm. Lots of energy. Lots of fun.

Are they great? Not really. They get back down by eight. But it's more fun than Devin and his alto clarinet.

And then, of course, I nearly lost it. CJ got pulled, Hayward got put in and we finally got a stretch of Favors/Kanter/Hayward/Burks all playing together. Our future. The kids. Doing their thing.

My personal favorite moment was when Earl dumped the ball to Gordon and he started directing the play: barking orders, gesturing where everyone needed to go. I think the Jazz would be a lot better off if he did that all the time—but he's just too deferential ... he ain't going to step up as the pilot of the O when he's surrounded by Millsap, Al, Raja, and Devin. Hopefully he can learn to assert himself. It's something I'm going to watch for.

Anyway, the kids don't play brilliantly. But they play hard ... which again was a lot better than the starting vets had done earlier. By the time the first starter checks back in (Millsap) the kids fight back to down five. And that's even with the refs deciding to just hate on the kids for fun via a bogus travel on a nice Favors spin and dunk, and a bogus goaltend on Kanter.

Yes, they did the job.

Sadly, pretty soon all the starters are back in, and they Jazz go back into their Kenny G mode, Devin comes out, not with his alto clarinet, but now going for broke — "MacArthur Park", at half tempo, on kazoo. The rest of the team thinks "yeah, I can go with that." In an related development: they're down by 12 within three minutes.

But Raja whips a sudden drum solo, nails a three at the buzzer, and Dirk decides to slam the ball down and get a T for, as far as I know, no reason at all.

And Devin, as we all know, sent Dirk a special thank you card for that. It ended up being his one point of the game.

After Devin's point, the Al goes beast for about 40 seconds (scoring 3 points off a layup and a free throw), and then they decide that layups are lame and jump shots are fun. Six straight missed jumpers. Luckily their D is much, much better than earlier, and Dallas manages to increase its lead to only 10. Yep, six straight misses, and Dallas scores only two points over the same time.

We're squirming. The Jazz look bad, but they're not down by that much.

And then the Jazz pull out their saxes, trombones, and trumpets. They whip out the bass and the guitar. And they give us the bout of Duke Ellington we wanted from the beginning. Layups, freethrows, and dunks, oh my. And defense! Dallas fights to get 12 points in the quarter.

My favorite moment of them all: Hayward's dunk in the 3rd. I missed it live, but I now have Synergy Sports and can watch it as much as I want and whenever I want. He's sitting there, playing the Trombone 3 part, it's an open jam improv for the band, and he just stands up, shoves the lead trumpet out of the way, and says: this one's mine. He steals, starts the break behind 3 other Jazzmen and 4 Mavs, doesn't even look to defer to someone else ... he just blows past everyone and dunks. The crowd's going crazy at this point. The entire club is rocking—that magic moment when musician and audience both say "oh yeah" — that's what's going on here. We're all thinking "Damn, if he can just keep this assertiveness with his playmaking smarts ..."

And then check in Earl Watson and Derrick Favors. And the good jams transform into angry, adrenaline-rushed Metallica. Earl goes after Dirk because Dirk smacked the ball out of Favors hands. Favors gets called for two lame, lame, lame offensive fouls. The refs channel their inner Joey Crawford and eject him. I loved this. So often Favors seems to kind of sulk when he's called for a lame foul. I want to see him pissed. It happened last night.

The Metallica covers are going crazy now. We're all head-banging. This is when we shout: "I'll be so pissed if we lose this game."

And from then on, it's just awesome basketball. It's hard fought. The kids play hard. The vets play hard. Earl acts like Aragorn leading the charge at the Black Gate. They're doing jam after jam. We're all getting up and dancing in a smokey Kansas City blues club.

And unlike the Clippers, Dallas doesn't whimper away and give up. They care. They fight. We care. We fight. Big defensive stands happen. Defensive gaffes happen. Big scores happen. Big misses happen. Millsap rebounds one miss so hard I almost thought his shoulder would pop out of joint. Gordon dunks the hell out the ball again.

And then comes Devin and his alto clarinet. It's the middle of "Night in Tunisia", he says he wants a turn too, but somehow gets his foot tangled in the cables and just falls off the stage.

Devin airballs a three-pointer. Misses by about three feet.

CJ desperately pulls out his sax. He's been smooth Johnny Hodges all night, and pulls off a miraculous recovery. Almost makes us forget about the alto clarinet. And then Jason Kidd actually throws the ball right to Paul Millsap with 1.7 seconds left. One last chance. One last possible riff to cap the whole night —but the microphone, still rattling from when Devin fell off the stage, finally tips over and clunks the band on the head.

The ball hits Sap in the chest. Gordon and Millsap fall down trying to pick it up. CJ holds his hands out at the three-point line.

We can look back and wonder what if. What if Kanter hadn't had that bogus goaltend called on him? Or if Favors hadn't been called for traveling? Or if CJ's 3 at the end of three was just 0.3 seconds quicker? But what if's never happen.

It was the best of games and the worst of games. I don't know about anyone else, but for me it was also one of the most fun total Jazz game nights of the year.

Let's slaughter some Wolves on Saturday.