Being a fan of a team that plays in a different country is difficult. It’s even more difficult when that team is one that hardly ever gets national recognition in their own country, let alone half way around the world. I know from personal experience. Thankfully global communications have continued to evolve and expand, and it’s not as hard as it used to be. It’s because of these methods that we, Jazz fans, are able to enjoy the great thoughts, words, opinions, and artwork being produced by Mizuho Nishio. You may already familiar with some of Mizuho’s work (Jazz Blog – Artwork Blog). If you are not, then you are in for a treat.

After the jump, an exclusive interview with Mizuho Nishio! (@jashin_mizuho)

#1. Which artists or style of artwork were your greatest influences?

I've been reading many Japanese mangas and American comics from my childhood, so they must be my textbooks of drawing. Especially, Hirohiko Araki (JoJo's Bizarre Adventure) and Tetsuo Hara (Fist of the North Star) and Akira Toriyama (Dr.Slump) were my greatest influences. However, when I draw NBA players, I usually use techniques of American comics. 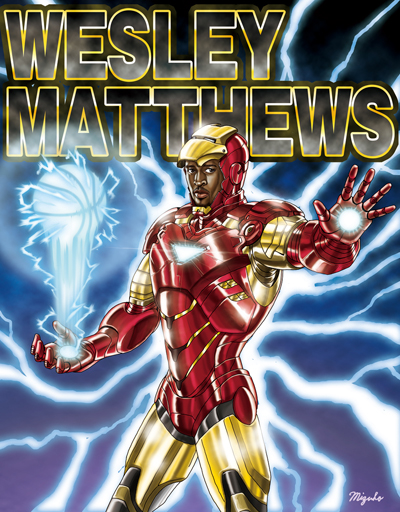 " Once Wesley Matthews asked me to make twitter AVI.

Both he and I were 'Iron man' fan,so I drew this 'Iron Wes' picture." - M.Nishio

#2. When drawing, what is more important to you – having your hard work be recognized by others, or being happy with the job you did making a beautiful piece of Art?

The most important thing is 'viewer's smile'. I'm trying to keep drawing pictures which make you happy. I usually make pictures and CG animations for magazines or TV programs, but I can rarely get feedback from viewers of these works. In contrast, twitter and blog are very good tools for me to know how you (and NBA players) feel about my works. Your smiles motivate me to draw pictures more! 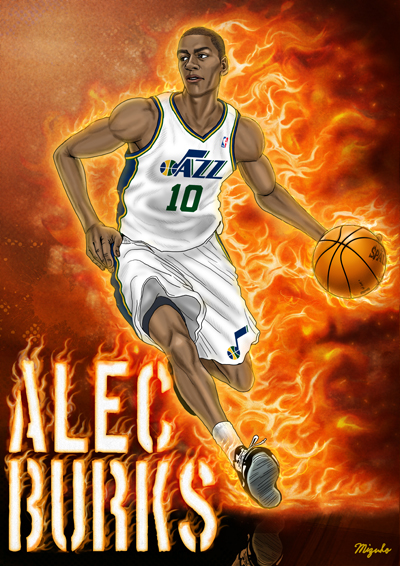 I'm so encouraged if someone likes my picture and uses it for twitter AVI." - M.Nishio

Everyone ask me the question, 'Why JAZZ?'. When I went to US, immigration inspectors and taxi drivers and even Jonathan Rinehart, PR director for the JAZZ, asked me the same question. (laugh) The answer is simple, 'Stockton & Malone'! For the first time I watched Stockton & Malone on TV about 20 years ago, I was excited to see their pick & roll, and soon became a fan of them and Utah JAZZ.

#4. What is it like being an overseas Jazz fan?

Before the internet era, it was very tough for me to be a JAZZ fan in this country, because there were few broadcast of JAZZ games in those days. But recently, NBA.tv enables me to watch all JAZZ games, and also I can read many news and blogs and tweets about the JAZZ, and communicate with other JAZZ fans around the world, so now I'm very comfortable and feel like I'm in SLC. The only problem is the distance from my house to ESA. (laugh) It is far distant, so I can't share enthusiasm with JAZZ fans in the arena many times. Therefore, My ultimate goal is to live in SLC and be a season ticket holder some day!

#5. Who is your favorite Jazz player of all time? Why?

He is my hero. I watched his video and learned how to play basketball. And, of course, I wore No.12 jersey of my team once. My biggest regret is that I couldn't watch his play directly, although Utah JAZZ came to Japan in 1990.

[Editor’s note:] I remember when they went to Japan, and as a boy I jealously felt "why didn’t they play in Canada?", which is where I was living at the time. The Jazz played two regular season home games at the Tokyo Metropolitan Gymnasium against the Phoenix Suns in a back-to-back set. Losing the first game 119-96, and winning the second 102-101. The Jazz would finish 54-28, and beat those same Phoenix Suns 3-1 in the First round of the NBA playoffs.

#6. Who is your favorite Jazz player for this year’s team? Why?

Earl has strong heart! He brings toughness to Utah JAZZ on both ends of the floor. I love watching him pass the ball to young guys. Especially 'the Early-oop' is awesome!

#7. Out of all the players you have not drawn yet, which one is next on your list?

I have drawn all the JAZZ players except them, so they are next on my list. Additionally, I have another plan of next JAZZ artwork and think I'll be able to release it before long.

#8. We here at SLCDUNK.com love your work. We all live all over the world, so it’s not like we can have a team photograph taken. Would you be interested in drawing us like we were all in the same place for once, if we sent you pictures of what we look like? (ha ha ha)

Sure! That's going to be very fun!

Thanks again to Mizuho Nishio for agreeing to do this interview. I think fans like Mizuho show that there are a lot of people who love the Utah Jazz who have no physical or historical connection to Utah. And I am glad that the team recognizes this as well. After all, this website alone has Tazz, Moni, and I who all fall under the same category. It would be really cool to meet this Jazz fan in person. Maybe we can one day at a Jazz game, and that day would be a great day for "Non-Utah" Utah Jazz fans everywhere.