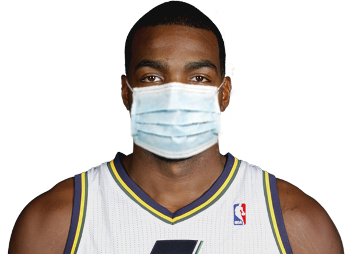 Yesterday Amar explained to us how Paul Millsap is the Power Forward Terminator, a lethal power forward sent from the future to destroy any player in his path. Amar showed us the head to head match-ups and how Millsap has compared to these All-Stars. Amar did this using box score stats and averages amongst them. Today, I’m going to dig a little deeper and see how Sap matches up when we take advanced basketball metrics into account to see how he has surgically dismantled his opposition.

The first set of stats we will dive into are compiled from Basketball Reference and are indicative of a players performance and contributions on the offensive side. The comparison is made to previous All-Stars, as well as current front runners at the position and consists of True Shooting %, Offensive Rebounding %, Assist %, Offensive Rating, and Offensive Win Shares.

The leader in each category is highlighted in green.

The first thing that stands out is that Millsap leads in half of the categories in this comparison. What is more remarkable is that Millsap has such a high TS% despite taking the least number of free throws (45) among the 6 PF's (Love has shot 153!). This means, as Amar pointed out, that Millsap has been accomplishing this both with remarkable shooting and being very good at making those close shots a good player is supposed to make.

The next category that is compared is the defensive metrics. Here we look at Defensive Rebounding %, Steal %, Block %, Defensive Rating, and Defensive Win Shares.

Again, the leaders are highlighted in green

In this chart we find that Millsap is in some heavy company when it comes to defense, but we can also draw some pretty important conclusions. First, Millsap is quite a bit shorter than all of the players mentioned above and still manages to haul down defensive rebounds at a rate good for 4th among this group. Second, Paul has quick hands as he nearly doubles his closest rival in the steals percentage category. Third, to go along with the first point, look at his block percentage. He manages to force a block percentage good for second in the group, which is a testament not only to his teammates increase in defense of the goal, but also his ability to force his opponent into a blockable shot. Finally, Millsap is only allowing 98 points per 100 possessions, putting him second on the list.

Finally, we will look at some of the statistics that combine these stats along with traditional box score numbers or how the player uses his time on the court to gain some insight. 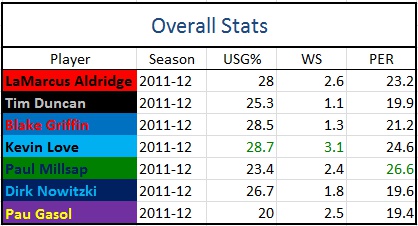 More fuel for the flames of Paul Millsap's Altar of Efficiency. Millsap is using possessions at a very low level compared to the rest. The obvious outlier being Gasol who, as @Clintonite33 Tweeted about the other day, has the the lowest USG% of his career thanks to Kobe chucking everything that lands in his hands toward the baskets (I'm not even joking about this. Water bottles, babies, reclaimed wood, a grocery store roasted chicken, even Steve Blake). But, more importantly is Millsap's PER of 26.2, which is currently good for fourth in the entire league and is a scant 0.1 points behind Kobe and 0.2 points behind 2nd place Kevin Durant.

Well, having gone through all that, how do they all stack up? Well, I developed a simple system to rank the players, in which each category is scored 1-7 based on their rankings in each category, add up all the scores and the player with the highest score is the best choice for All-Star. This is pretty far from scientific, but the player leading his peers in these categories is probably pretty close to who should be chosen.

Based on this data Millsap just edges out Kevin Love as the most worthy of the All-Star nod.

Now, I'm going to do many things that do not require numbers or Excel.

*For information on these Stats, check out Basketball-Reference.com's Glossary page