Share All sharing options for: Karl Malone Killed the Radiostar: The Downbeat #673

Well, it happened, and we all survived. Jimmer Fredette came to town and left and the Utah Jazz pretty much remained intact. I'll admit, that I don't get what all the hullabaloo was about. If you didn't know that there was going to be some craziness, or fans who only came to the Jazz game to cheer Jimmer, then I'm not sure you've been paying attention. I think we can all agree, that it is probably for the best that the Jazz didn't draft Jimmer, just from all the attention it would have taken away from professional basketball and the Utah Jazz. But for two nights a season, I don't mind a little ridiculous excitement. Everyone comes to professional sporting events for different reasons and no reason is better than another. According to the SLTrib, Alec Burks was a little taken aback by all the commotion.

"I have never seen anything like that. That’s crazy the way he gets that recognition. I thought Jay-Z or someone had walked up, but it was just Jimmer. So it’s crazy."

Gordon Hayward had a similar response*, with one difference. Hayward said, "It's crazy how everyone loves Jimmer. I thought all-star rapper TJ Fredette had walked up, but it was just his little brother Jimmer. It was crazy."

Besides Dustin being the first Jazz fan I've ever heard claiming to have correctly predicted the Deron Williams trade, I thought the idea behind this particular trade he alludes to was interesting. The trade wouldn't work by just being a swap of Marion and Beaubois for Howard or Miles under the rules of the CBA. But the Mavs could trade Beaubois and Brian Cardinal for Josh Howard as long as the Jazz agreed to take Shawn Marion and his 3 years/$25 million contract into their trade exception in a seperate trade. But even if I don't think the Mavs would make this trade, I do think it brings up a good point. The Jazz are in a position to absorb somebody's bad contract for a couple of years, WHILE taking on a talented young player or draft picks along with it, much like Oklahoma City did for us with Matt Harpring and Eric Maynor. So take that to the trade machine with you. Go find some bad contracts (where the first year is under $10.8 million) and trade them to the Jazz along with some picks or young talent on that same roster. It's fun. i'll see you in an hour.

PS. I think the Jazz would make this trade with Dallas in about 15 seconds and unlike Dustin, I don't think it's happening.

The play, or really the overall energy of the team was a little discouraging this weekend. They looked tired and apathetic at times against the Mavericks and sloppy and distracted against the Kings. I saw Paul Millsap take some heat for his lackadaisical play and I agree that he looked disinterested for the first time this season. But I think we assume that Millsap gets worn down as the season progresses, or as games are played closer together, but as you can see from this graphic, that isn't the case.

Paul Millsap actually plays better in the second game of a back to back set, than he does in games where he gets a day or more of rest. These numbers are from last season and his scoring and rebounding are all up in games with 0 days rest. He is actually significantly better in these types of games 3 out of his 5 years in the league (I'm not counting this season, due to the low number of games in each category, or as some smart guys like to call "sample size.")
And for what it's worth ($7.57 USD), Millsap's numbers were better after the all-star game last year, than they were before it. So the idea that he wore down at the end of the last season, is possibly false as well.

You can take away my Jazz fan card, but I have yet to get a chance to listen to the Karl Malone appearance on 1280 the Zone from Friday. I have heard bits and pieces of what was said, but I would love to be filled in a little more. So tell me (and others) what I missed. What did Karl Malone say that rang true to you? What was the funniest thing? What was the most ludicrous thing he said?

Congrats to rxmike, who correctly guessed the last Utah Jazz trivia question. The answer was "Utah Jazz players with a colorful nickname." For his efforts, rxmike won this bib: 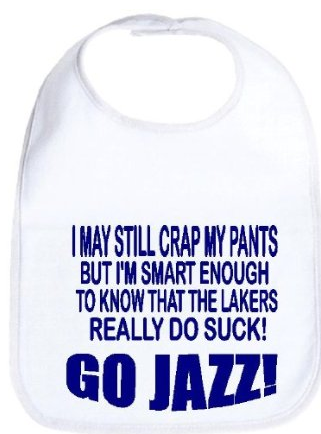 So those are the types of prizes you can only win here on the downbeat trivia game.
Today's question is: "What do these Utah Jazz players have uniquely in common?"
Aleksander Pavlovic, John Duren, Quincy Lewis, Ryan Humphrey
*Gordon Hayward did not really say this.