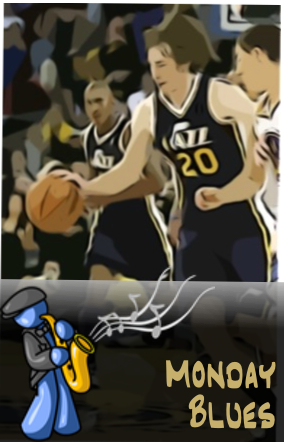 Note: I'm putting this together at work, and YouTube is blocked. So I'm hoping all the videos are working correctly. If not, I'll fix it when I get home at about 3:00.

We said:
Big Al's just no good
Big Al is just a bum
The season aint even started
And I know I want him gone
But then he learned to play D, carry the team, and now we're glad and we think of the games we won.

We said:
Raja's so, so bad now
Look, he's scared to shoot
Can't defend a sponge
KOC, give the dude the boot!
But then his wife had a baby, he's shot threes like crazy, and defended like a brute.

So, who's struggling and want to be our punching bag next? We're 5-5 on turning them around. I vote for interior defense.

Good things from the week that was

It wasn't the best week. We all know that. But there were still decent things to be happy about despite it all:

Even with a gimpy leg, Al did this:

Alec played within the offense and did this:

CJ did this kind of thing often

Hayward did this again (finally!)

Despite the overall downer week that was, there was still some stuff worth cheering for. Let's hope Al either gets mobile again or Ty cuts his minutes to save our team's interior D, let's hope Earl gets his mojo back, let's hope Millsap's Sacto game was just a blip, and more than anything else, let's hope Hayward can play like he did against the Kings every game. If we have to fly his girlfriend in every game so they can do some celebrating afterwards, I'd be willing to donate $5 to the cause.