Jenga is, correct me if the info I have is wrong (I'm getting it from Wikipedia), the game of Kings. The Utah Jazz recently beat the Sacramento Kings, so we took their game too. Here is a picture taken by Eric Bresee (@da_breezman -- a producer at KJZZ) showing Utah Jazz lottery picks trying the game out. To be fair, I'm absolutely certain that Alec Burks would beat Gordon Hayward (too tentative), Derrick Favors (too strong and can get frustrated), and Enes Kanter (by the smile on his face, obviously his first time sitting at a rounded table, and unable to focus). 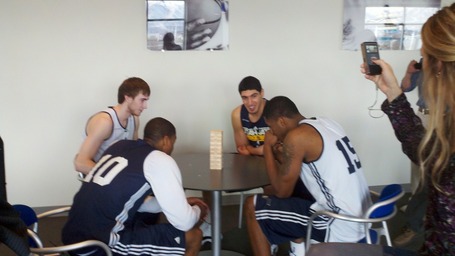 If the Jazz don't make the playoffs this season, and if the Golden State Warriors dunn goofed, we'll have two more lottery picks to play board games with next season. Of course, by then the Jazz won't be playing a game of falling bricks -- but looking at something more like the term "Monopoly".