The Difference Between Stars and Role Players - The Downbeat #886

Why Kevin Pelton has got me a little bit worried.

Share All sharing options for: The Difference Between Stars and Role Players - The Downbeat #886

Kevin Pelton is a young man and a main contributor of APBRmetrics (Association for Professional Basketball Research) in basketball. He is also on twitter and a consultant for the Indiana Pacers and a main contributor/author of the fantastic Basketball Prospectus. He also visits the 1280 Utah Jazz show hosted by Spencer Checketts and Gordon Monson every Tuesday afternoon to provide basketball insight.

You may also know Kevin from his frequent podcasts with David Locke in which the two play mythbusters and use analytical data to determine the validity of a basketball statement. For instance, the latest discussion was on whether making the playoffs as a borderline playoff team increases the chances that team will make the playoffs in the future. As you can imagine, this question should have some significance to the Utah Jazz fans, as the organization has continually pushed the necessity of developing young basketball talent by making the playoffs, as they did last year. Did that improve the team more moving forward than by missing the playoffs?

I won't spoil what Kevin Pelton found on this topic, but you can listen to the podcast here. You really should listen to it.

That entire podcast is interesting and Pelton especially has some insight into the Alec Burks' situation. But it's something that Pelton said in passing at the end of the podcast that has me the most concerned:

Pelton: I think I picked him (Kemba Walker) as most improved player.

Pelton: Umm...guys that use a lot of plays at that young age, tend to get better quickly, I guess.

Locke: What about Brandon Knight, who I thought was going to be really fabulous and I'm really concerned with him?

Pelton: He was so much more of a role player as a rookie, therefore his projection doesn't go up nearly as much (for this season).

So if you read between the lines on that statement, you might notice that there is a hint of improvement being linked to not playing time, but plays (possessions). How radical of an idea is that to you slcdunk readers? Could having the ball in your hands more and more, directly lead to improvement on the court? And what does that mean for our young guys if it is true?

i'm honestly not trying to insinuate any blame or finger pointing at the Jazz franchise or coaching staff, but I really think this idea is worth discussing.

In another Locke and Pelton Mythbusters podcast (Pelton has been important to me in my search for NBA truth lately), Pelton suggests that high rates of turnovers are a good sign for young NBA point guards and wings because as Pelton suggests, "what are turnovers as a rookie, are going to turn into highlight reels a couple years down the road."

Both of these mentions by Pelton reminded me of a post I wrote several months ago that fits nicely into this thinking. First of all, I have to apologize for reposting something i wrote (that's a pet peeve of mine in the blogging world), but I am doing it for the sake of discussion and continuity, I am doing so.

You should read it here

Even if you read it back in February, when I first wrote it, it's interesting to see how things have or haven't changed.

It is probably the most interesting thing I have written or stumbled upon, in my opinion. In short, I found that giving playing time and possessions to a wing player won't make them a star, but that all wing stars had top usage on the team from early in their careers. Or more simply, playing time and having the ball in your hands will accelerate improvement in a wing player. This is essentially what Pelton hinted at as well. 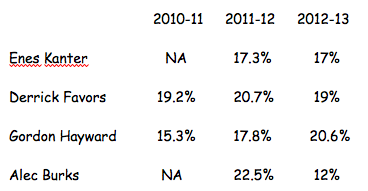 As you can see, Kanter and Favors are sort of stable in their opportunities which makes some sense because they are getting similar opportunities behind Jefferson and Millsap, and they are bigs. I would have liked to see Hayward have a higher percentage from earlier on, but his steady increase every year in the amount of possessions looks textbook on how you should develop a young, wing player. We should have high hopes for Gordon. Alec Burks on the otherhand...

There was one contract extension that went very under the radar I thought. Chicago Bulls power forward and sixth man Taj Gibson agreed to a 4 year, $38 million extension right before the extension deadline. Here are Taj Gibson's stats via ESPN: 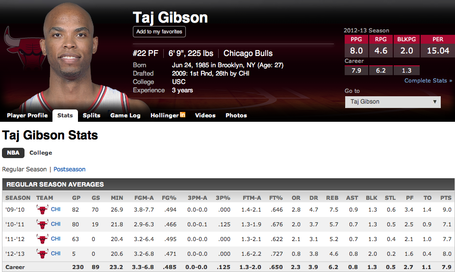 Two things are important here. One, Gibson is probably a career sixth man, known for his defense, but he was able to get nearly $10 million a year by averaging 8 points and 6 rebounds and 49% shooting in 23 mpg. He's also 27 years old. Derrick Favors is 4 years younger, more athletic, and putting up virtually equal numbers. Jazz are going to have to pay Favors a minimum of $12 million a year on his contract extension.

As for Paul Millsap, I think Gibson is a nice comparison for him. Millsap is better offensively than Gibson, but Gibson is more athletic and a better defender. Millsap should be able to garner $10 million a year or just under it.

Secondly, I think the Bulls got an okay deal for Gibson, but I think they overpaid him. If you want to keep your own guys, without lowballing them and potentially causing hurt feelings, you have to overpay them a bit. It happens almost every time. It happened with almost every extension this offseason. It will happen for the Jazz in the future.

B With the breaking news that the Los Angeles Lakers have decided to hire Mike D'Antoni, I thought I would just share that I am relieved that Jerry Sloan wasn't ever a serious candidate for the Laker job. I really never bought into the the hype that he was a serious candidate. I can't think of many more unJerry things to do than to come out of retirement because you don't want to deal with egos, in order to coach Kobe Bryant, Dwight Howard, etc. It went very under the radar, but I think Jerry himself had an award winning quote on the speculation via ESPN's Chris Broussard:

"They won't contact me," Sloan said. "I'm not concerned about that.

"I'm concerned that my name is being thrown out there every time a job is open. It makes me look like I'm desperate. I'm not campaigning for any jobs."

And from the USA Today's Sam Amick:

"I haven't talked to anybody (from the Lakers)," Sloan said. "That's what's interesting is that I didn't talk to anybody because it looks like I'm just trying to take every job that comes up and I don't like that. So I'll just keep out of it."