NBA Utah Jazz 2012-2013 Statistics: Everybody gather round and lets do some shots!

This is a family friendly blog, and I don't drink; so, the shots we're talking about are on the basketball court

Share All sharing options for: NBA Utah Jazz 2012-2013 Statistics: Everybody gather round and lets do some shots!

I know that I've wanted to have a more diversified, and thus less predictable and harder to defend, offense. I'm hesitating on that right now because our primary player, Al Jefferson, isn't always getting the ball when he should be. Compounding this problem is that this season Big Al is actually taking his shots more and more from where he needs to be taking them from -- namely in the paint and at the rim. So he's doing more of what I prescribed him to do; but he's seeing the ball less. Strange, no? I guess this means I'm a flip flopper -- so expect this to be in the Anti-Amar attack ads in 4 years.

By the box scores Al is shooting less, and I guess his box scores are easier to read. He's not getting to the line either; but that's a product of his play style. He's a finisher who works damn hard to get open, despite playing in the paint. The paint is where they allow the tightest defense. So, it's phenomenal that he gets so many good looks. I'm not happy with some of the types of shots he takes, but I am happy with how hard he works to get them. Randy Foye hardly had to work at all for his shots, and he similarly doesn't get to the line that much.

I wanted to see, in lieu of Favors (aka Favorites)' massive FTA mark last night, where our guys stood in terms of shooting from the floor (FGA) vs. shooting from the line (FTA). Ratios are easy. We learn them early, e.g. "There are 5 green apples to 2 red apples". So let's look at the ratio of FGA to FTA. (Essentially, how many FGA a player needs to take before he gets 1 free throw attempt)

* N.B. Kevin Murphy hasn't actually taken any free throw attempts this year, and this is a divide by zero error, for simplicity I just put him at zero here -- but he's actually on the other side of this, worse than Jamaal Tinsley visually.

Jeremy Evans is the "winner" here in terms of getting to the line the most frequently, as a product of how infrequently he shoots the ball. The opposite pole is Jamaal, who almost NEVER shoots, and is almost never fouled. In between those two outliers is were the meat is.

You have scrappy, physical bangers like Derrick Favors, DeMarre Carroll, and Paul Millsap who all have a ratio more favorable than 3:1. They get to the line frequently. On the other hand you have spot up guys like Randy Foye and Mo Williams who have ratios in excess of 3.5 : 1. Mo just takes a ton of shots. He's great at the line (he has only missed one FT all year), but he's also taking a ton of shots. A TON, I tell you. Big Al takes a lot as well, however, he works towards avoiding contact. So his value is understandable.

Gordon Hayward and Alec Burks both go to the rim whenever possible so this is understandable. The curious thing here is actually Enes Kanter. He gets to the rim less frequently (as a relation of how many FGA he takes) than Randy Foye does. And he's a back to the basket big. I guess this is the result of three major factors: he's a young, project Euro -- and that don't usually get to the line a lot; he works hard to get open like Al does, though he doesn't shy away from contact; and last, he is taking a bunch of shots.

At least, that's the impression I got from early on this season and pre-season. Let's investigate who is shooting a TON and who is only perceived to be shooting a TON. 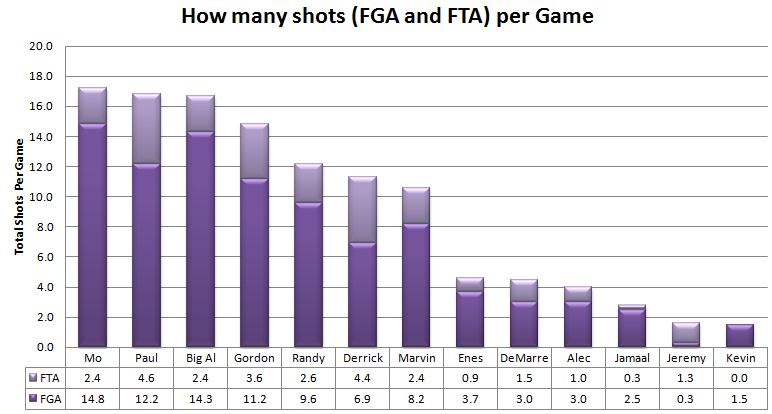 Mo Williams is taking the most shots per game from the floor, and he's taking the most overall when you also add in his free throw attempts. Though, only about 14% of his total shots per game are free throw attempts. Paul Millsap, on the other hand, has 27% of his daily diet of shots from the line. That's almost double. There are a lot of interesting things from this . . . we see the same type of thing as Mo and Paul on the bench with Randy and Derrick.

Beyond that we actually see that Enes is shooting 3.7 times a game. I guess we need to investigate this more -- it's clearly not him jacking up shots that makes his ratio look so bad.

This is not anything but an extrapolation of observable data; it's not a replacement of actual values though. This is levels the playing field a bit.

From this we see a slight shift. Mo isn't #1 anymore, and it was funny to note that he's actually playing 35.9 MPG, and thus his values can be seen as a measuring stick for these 36.0 MPG calculations. Paul, Big Al, and Alec all would shoot more total shots per game if they got Mo style minutes. Kevin too, but he really doesn't count. It's also good to note that each of those first three guys (Paul, Al, and Alec) all have a higher percentage of their total shots come from the free throw line than Mo. (Al by a few percentage points)

This doesn't mean that Mo is a horrible person, it's just a tool to help us see how our players shoot, and how is this related to play style. (As seen in FTA) The other startling thing is that for the most part EVERYONE on the team would shoot the same number of total shots (around 18.0 to 16.0). The only people who fall outside that range are Kevin Murphy, Marvin Williams, Enes Kanter, and Jamaal Tinsley. Isn't that interesting? I think that's interesting. As an aside, I really wonder how this would change if Randy and Gordon were the starting 2 and 3, and Marvin came off the bench and did more with that group. I'd love to see how that works, if it does, down the line.

The Times, they are a changin'

So, just so we're all on the same page here -- the data right now shows that the dude who is the leader of our team (okay, good, check, we have a leader), is our starting point guard (okay, still good, not a bench guy, and we've had good results with John Stockton and Deron Williams) . . . and he's also shooting the most (but . . . but don't we have four bigmen who are the envy of the league?). Of course, 9 games is JUST 9 games. But we all knew that Mo Williams is a shoot first PG; and frankly; we're not in the position to win many games this year without his timely shooting. In fact, we probably lose game 1 against the Dallas Mavericks without him. That's the benefit of Mo; he can really get hot. That does not guarantee that he'll always be hot though.

But he's taking more shots. And this is our new team, I guess. We're a team that takes a lot of shots from the guard spots. I guess we've finally caught up with the rest of the league; it just feels weird right now. Speaking of strange . . . here's the change in total shot attempts for Mo Williams, Al Jefferson, Paul Millsap, Randy Foye, Gordon Hayward, and Derrick Favors between this season and last season.

Only Mo and Gordon are taking more. Al and Sap are taking less. And Randy and Derrick are taking about the same. Almost universally, though, everyone is getting to the line more (except for Big Al).

So what does this mean?

Double rainbows aside, I really don't know. The sample size is small -- but I would echo Spencer's point from last night's post game video, I'd love to see us go inside first, then out, rather than going out then in. When Mo is feeling it he's a great asset; however, sometimes a number of misses in a row can quickly turn that into forcing it.

I think Big Al, in a contract year, is really taking one for the team. He's playing less. Shooting less. Passing more. Trying on defense. And spending a lot of time trying to mentor our young bigs -- his erstwhile replacements. He has endeared himself to me with these actions. Mo is taking +3.0 more FGA per game than he did the previous season. Al is taking -2.9 less. I'd be cool if they did a +/- 1.5 swap, if not more. As bad as Al is at getting to the line, he gets there more than Mo does.

But, ultimately, our future will reside in the capable hands of Derrick and Gordon. And last night they really showed more and more growth and confidence on the court. After all, they both went one on one against Future Hall of Famer Kevin Garnett and beat him. As a whole we're sharing the shots more. Some guys still do more with them than others. And this isn't a "Mo had a bad game and we hate him now" post. That's dumb. He's the best guy for the job right now, and he's done a great job so far. If the situation was a little different (and we weren't playing from behind) I'm sure down the stretch we would have gone to Big Al for the sure thing. We got back into the Boston game by hitting threes -- it was the right coaching call. Mo just missed some shots we've all seen him make this season.

EDIT: Here's the breakdown for the Total shots PER 36 Minutes, and the change from this year to last ....