Average is Something To Be Thankful For - The Downbeat #892

Let us all give thanks for the Utah Jazz basketball team.

Share All sharing options for: Average is Something To Be Thankful For - The Downbeat #892

I know most of you are relieved to be done with the Presidential Elections, but here is an interesting piece done by the Washington Post, that discusses one of the reasons Barack Obama was able to distinguish his campaign from Romney's: data mining.

The campaign teams of both candidates were so involved in statistical analysis and the collection of voters' leanings and addresses, that they could target certain groups in neighborhoods and give them a unique television ad, or internet spot catered just to them. The article discusses ways they could do this and how, on the election day, Obama's program functioned better than Romney's.

So why is this pertinent to the Utah Jazz? Like the presidential candidates, the Jazz have to be in the interest of the most advanced data collecting they can be. We simply don't live in a world where you can maximize your business, or your practice without some statistical analysis and planning. We are not a championship team. No right now. But every game, and every lineup and every possession offers the fans, and more importantly the decision makers, to figure out what this team needs or doesn't need in the future to become a championship contender.

This was my first thought on the news that the starting lineup would be Mo Williams, Randy Foye, Paul Millsap, Derrick Favors, and Al Jefferson for Saturday Night's game. The more experimentation there is, the more data, the team can collect. And that may be more important in helping the team progress towards a championship than actual wins this season, although we'll take the wins when we can get them too, thank you very much.

One thing the change in the starting lineup did, was it allowed Gordon Hayward to be the focal point of the offense off the bench. This got me thinking about Gordon and his potential as the centerpiece around an offense in the future. Essentially, I picked a random number of shot attempts that I believe would put Gordon in the top 2 or 3 shot takers on the team in a given night. I picked 12 shot attempts and found every game where Hayward shot 12 or more times. Here is the list:

I was surprised that Gordon has taken only 12 shots or more in 18 games in his career. But a breakdown of the stat averages in these 18 games goes like this:

Those are all-star type numbers. The problem is that the correlation is probably that Hayward is more inclined to take more shots when he is playing well, so you probably can't say that Hayward would be able to put up great numbers on a regular basis if he were getting 12 shots every game. But it does make me wonder what his numbers would look like, if he were the number one or even the number two option on the team. There's a possibility that Gordon Hayward is the best playmaker on the team already.

I would venture to guess that if the team did decide to move in a different direction and not re-sign Al Jefferson, for instance, that Hayward would be the biggest beneficiary of shots and touches.

Just to make you guys jealous, here is a piece of art from rareink.com, that I got this week. It's basically awesome. 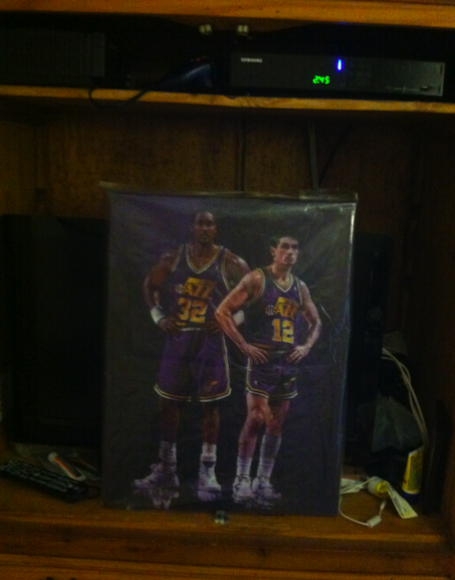 Now to figure out the right place to put it. My wife won't let me put it where the family portrait is, unfortunately.

The Jazz don't have a great record at 5-6, but things are actually looking okay in the long run, I think. The fact that the Jazz have played 8 of their 11 games on the road against some good teams, really bodes well for them. The Jazz have even been able to manage having an average offensive and defensive team, while being away from Salt Lake City so often. Basketball-reference.com has the Jazz as the 14th best offensive and defensive team in the league.

On top of that the Jazz are going to be tremendous at home this season. They are 3-0 and one of only 4 teams that have won all of their home games thus far. The other teams are New York, Miami and Memphis. the dream for 41-0 is still alive and we are going to be 4-0 at home after we thump the Rockets tonight.

Quick Poll Question: If you could have any Jazz player/worker over for Thanksgiving dinner, who would you invite and what would you cook for them?