Jazz and Kings both played last night -- and played each other. Tonight the Kings will look for payback, while the Jazz will look for their third road win this season. Sacramento will be playing in not only the second of a back to back game, but also their third game in four nights. The Jazz previously had three nights off before last night's game, the first of the back to back set.

Well, much of what I wrote yesterday still stands . . . but let's not cop out. We're SLC Dunk. Our readers deserve great original content daily. So . . . . the Jazz and Kings really do match up well, with most of the recent games in this series going the distance. Last night, game 1 of the three game series, the Jazz fought back against a 13 point fourth quarter deficit to win 104-102. (Game Recap Here) All of the last few games have been quite close. Last season this is what happened:

These two teams do have a playoff history and recent history as well, as DeMarcus Cousins likes to go a little nuts and pick fights with our point guards. Also, last night Enes Kanter gave him an elbow to the head. Offensive foul on Kanter, but still, completely acceptable in lieu of how physical this series has been over the years.

I really expect the amazing free throw advantage we enjoyed last night (33 to 16) to be almost equally reversed tonight. That's just the NBA game. We'll be the road team tonight, and we know that our physical play on the road doesn't always result in going to the line. Compounding this will be the fact that the Jazz went only 3/15 from deep last night, and will not be playing (most likely) without Mo Williams tonight. The Kings are GREAT from deep and shot 10/17 from deep (58.8 3pt%) last night. This was a product of playing for the drive, giving them open looks, and -- let's be honest -- some great shooting on their part. Sometimes the other team just can't miss. Last night it sure looked that way.

I want to write more about this game . . . but I really have to go to the gym now. So see you all later! More posts to come soon!

I got nothing, but reading the post game thread for last nights game at Sactown Royalty is pretty fun. Hopefully it's not US filling the comments with funny gifs of failure . . . check it out here!

It's going to be a battle of the bench backcourts. Last night Marcus Thornton went 7/13 and 3/4 from deep on his way to 18 points. Additionally, Jimmer Fredette went 3/7, and 3/4 from deep for 10 points. That's 28 bench points from two guys. In the same game Gordon Hayward went 7/16, and 0/2 from deep, and notched 23 points all by himself. But he can't be asked to do it all by himself from the guard line. Tonight we need some Earl Watson action as I presume Mo Williams will be out and Jamaal Tinsley will start. Earl isn't a scorer, but he's a heck of a defender. Jimmer managed to make him look unready as he got opportunistic shots off of pick and rolls and Marcus got to the rim with hesitation moves.

Earl is a better defender than that. And Gordon defended guys well (especially in transition). Which pair of bench backcourts wins tonight may very well end up being the X-Factor to this game.

A lot of the previous Jazz / Kings games photos that I have available to use in these things seem to include this Alec Burks dude. The craziest thing about this entire situation isn't that he raped a 14 year old girl, or fights with the coach, or has physiologically imperfect shooting mechanics, or doesn't play defense . . . he's a guy who works hard, who has changed his game (he's passing a whole lot more now, btw, the ONE offensive knock on him), and not making a fuss about sitting.

And it's not getting playing time because right now because of certain trickle down sacred cows, means that Randy Foye is more valuable. Right now Randy Foye is averaging career lows in assists, rebounds, and steals per 36 minutes of play. (That shows that his play, right now, is worse than it's ever been -- save for his carer high shooting from downtown.) The flip side, of course, is that beyond threes Foye has gotten torched this year. Synergy (for this season even) lauds Burks' defense. 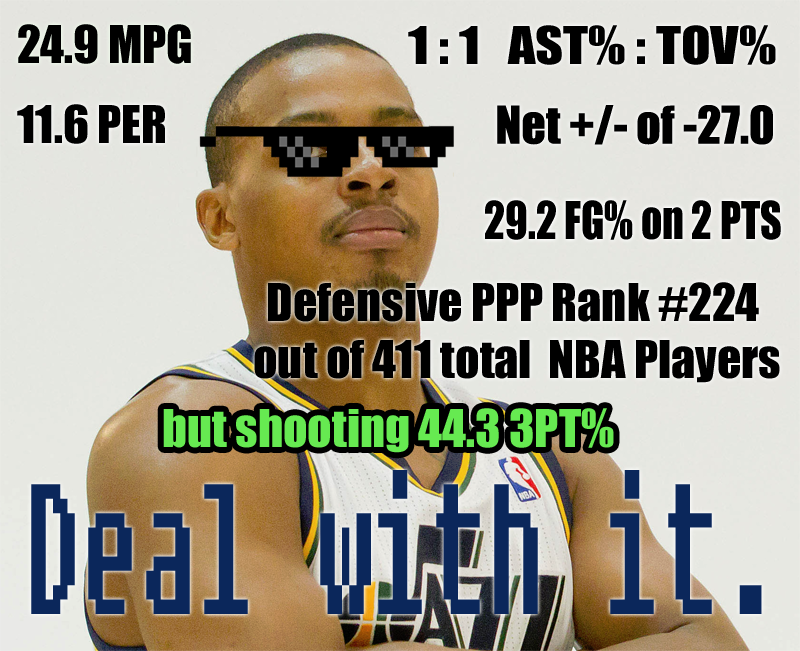 This is really the longest "as an aside" ever . . . and probably I should flesh this out into a real post if the insanity continues past 20 games into the season.

The Jazz win. Why? Because Jamaal Tinsley has awakened! And also because the Kings will beak themselves tonight because they are tired.