After Saturday night's disappointing loss, it's probably a good time to take a step back and evaluate this team on the season so far. The Jazz are a pedestrian-like 7-7, but as will be true for the next few weeks, their record is obscured by their road-heavy schedule. With the road losses piling and the play looking uninspired at times, the Jazz are still pretty much on track to finish with 45-48 wins, get a 7th or 8th seed in the playoffs and lose in the first round.

And if we are all being honest with our collective selves, that is right where we all knew this team would be this year. So the season is unfolding to plan, even with unexpected peaks and valleys.

It'll be interesting to see how tonight's game goes. The Jazz will be comfortable at their own place, but are also up against the Denver Nuggets who sport a mammoth 4-5 road record and have already beaten the best NBA team on the road. I'm going to say the Jazz pull this one out 101-97.

After the Kings loss, Sltribune writer Bill Oram tweeted this question that I believe will be a theme to this season:

I think the Jazz do have an identity. I think teams without a superstar tend to fall in line with the team captains, or more often in line with their coach. And I think this team is a lot like Coach Tyrone Corbin. This team is calm, cool, congenial, gets along well with others, and isn't sure yet about rotations, roles, and playing time. Oh, and only gets about half of the fan base's approval of their job.

I think we should use this bullet point to take a pulse on the offense and defense of the Jazz. According to John Hollinger via espn.com, here is the Jazz offense per 100 possessions: 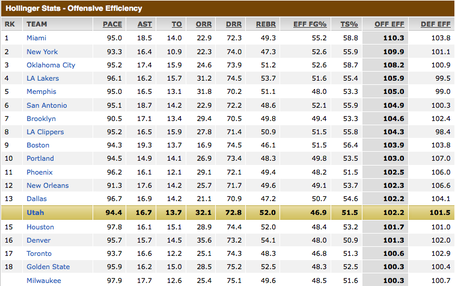 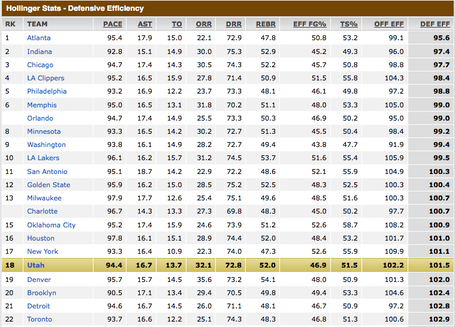 So the Jazz have stayed about the same offensively, but have fallen from 11th to 18th in defensive efficiency. I don't think the overall defense of the Jazz is very surprising, especially given the road-heavy schedule, but I think we all have a right to be disappointed in the offense thus far. On paper, this team had the look of a top 10, if not top 5 offense in the league. Still a lot of time to get there, but a bit disappointing so far.

The odd thing about the 4th point, is that praise is due Al Jefferson for his defensive work, yet he has been disappointing offensively, even by his own standards. Paul Millsap has been even more inconsistent offensively, despite his 55% shooting from long range. Add in Marvin Williams' somewhat predictable offensive inconsistencies and it is no wonder the Jazz are having issues offensively.

The interesting thing is that each of the Jazz players in a contract year are frankly underperforming, especially on the offensive side of the court. Overall, this is bad for the Jazz right now, but what does it mean for the long term health of the team? Does it make each of these guys easier to re-sign at Jazz-friendly deals? Does it make them less likely to fit into the long term plans of the Jazz? Or less likely to want to return to the Jazz? No matter how you feel about the games right now, the pending trade deadline and off season decisions might be in the back of your mind. And it's hard to say exactly how this season is influencing Dennis Lindsey et al, in making long term plans for the team.

What do you guys think? What have the first 14 games (16% of the season) taught you about the team moving forward?