In this last year's draft the Utah Jazz had pick #47, and used it on small school standing out shooting guard Kevin Murphy. Previously at pick #47 the Utah Jazz had picked Mo Williams and Paul Millsap -- two guys who are STARTING for the Jazz. So, the Jazz kinda get their scouting pretty okay on 2nd rounders. The jury is out on lottery picks, but the Jazz do quite poorly with late first rounders (Greg Ostertag exempted). Kevin had played in just 3 games this season with the Jazz, and only 9 minutes. With Randy Foye shooting 45-bajillion-percent from three this year, there really isn't a need right now for Murphy to sit and watch. (And that's precisely what he's been doing this year).

So, Jazz General Manager Dennis Lindsey announced that Murphy is going to Reno. The full press release by the Utah Jazz can be found here. In it you do find this cool tid-bit:

"Murphy becomes the sixth player in Jazz history to be assigned to the D-League, and the first since current Jazz teammate Jeremy Evans was in March 2011." -- The Utah Jazz, at NBA.com

Off the top of your head can you name them? I think I can: CJ, Mobe, Fes, Koof, and Jeremy, right? I just checked, I am correct. Because this is an amazing blog with amazing readers, let's do an amazing job with this post. Here are their stats as well:

And now we're throwing Murphy a bone. I really don't expect Murphy to spend a lot of time with the Reno BigHorns. The Jazz look at the NBDL like a chore and obligation more than an actual D-E-V-E-L-O-P-M-E-N-T tool. After all, players on their rookie deals are eligible to freely go down without any contract issues under their first two seasons. We've had a lot of guys not get playing time with the team just sit in their first two years; while smarter teams like the San Antonio Spurs actually USE their D-League teams.

I guess this is some of that Lindsey magic.

The even better news is that we may actually get a chance to SEE him play too: 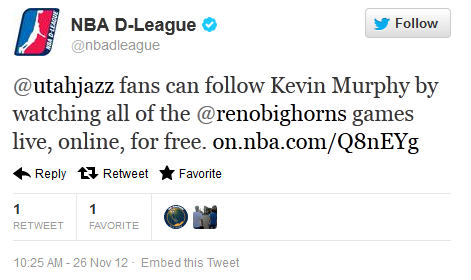