Bear. Prophet. But First, And Foremost, Entertainer. The Downbeat #898

The Bear prophesies of the win to come, the last days, and of silly string falling from the heavens.

Share All sharing options for: Bear. Prophet. But First, And Foremost, Entertainer. The Downbeat #898

Wow...what a win. That was crazy. Up and down. But mostly:

BTW (that's shorthand for by the way, in case you didn't know), you should all be following @cowhideglobe if you weren't before. Masterful tweeter. On to the downbeat.

ALL HAIL BEAR, SON OF KWANTU. 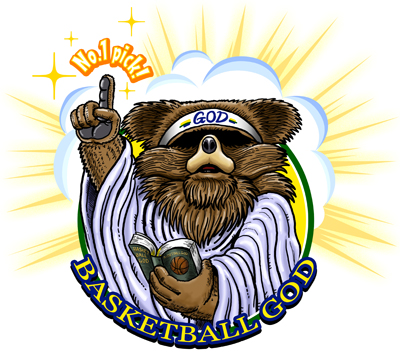 The Jazz game last night was a game of twists and turns. I still feel the Jazz are finding themselves. I really don't have much to this bullet point other than wanting to know your reaction to Millsap sitting out yet another 4th quarter. What's your take?

Personally, it seems as though Millsap's value right now is sliding in a contract year. It's interesting to be sure.

The Jazz's entire roster is made up of VERY tradable pieces.

Big props to Jamaal Tinsley. I'm sure most of you know that I felt Earl Watson was the better of the two. In case you are wondering I'm currently deleted any evidence that I said that. *aside* YES PUT IT ALL IN THE SHREDDER NOW! THEN BURN IT! NOTHING LEFT BEHIND. As I was saying, Tinsley had a phenomenal game. His line was great:

He did everything. He got assists, he got blocks, he got steals, he borrowed Ray Allen's jumpshot for a game. He did everything in order for the Jazz to win and while he was on the court the Jazz had a positive +/- differential. That is huge.

[Author's Note: We could have talked about Al's big game here but most of the pub went to Al from the press. This game from Tinsley fueled this win. Without J-Tizzle, Al has just another big game in a big loss.]

Finally I'll leave this tweet to you by @HPBasketball. I could go into an entire post about this but I leave it unto you, the reader:

Utah might want to look at Favors tonight and pull the reins on trusting him with the franchise.