I called out the Jazz in the preview, they responded. Just as planned.

Let's not get into it. They were running, dunking, posing, taunting, and laughing. Al Jefferson then made the laughing stop.

Too much to get into here. The Jazz were still in a hole at the half after an effective run in the second quarter made it respectable. The Jazz got angry and played with some pride, and a 6-0 run and a 14-0 run retook control of the game in the third quarter. Iggy got tossed, but not before he saw his Nuggets fall below the +/- line for the first time since the early part of the game.

Yes, it looks like a mountain range, and we scaled it. via Popcornmachine.net

Al kept pouring it on, we kept feeding him, and a mixed lineup Jamaal Tinsley, Gordon Hayward, DeMarre Carroll, Derrick Favors, and Enes Kanter went on a 12-6 run in the fourth quarter that changed Jazzfandom's idea of this game significantly. Before we were pissed because it looked like we would lose in a blowout. Now after that 12-6 fourth quarter run we would be pissed if we lost this game.

The crowd was rocking all second half (thanks to the desire to unite against a common foe, the refs -- who were horrible against both sides), and when Big Al came in for Enes, this mixed lineup finished the game and the Nuggets off. 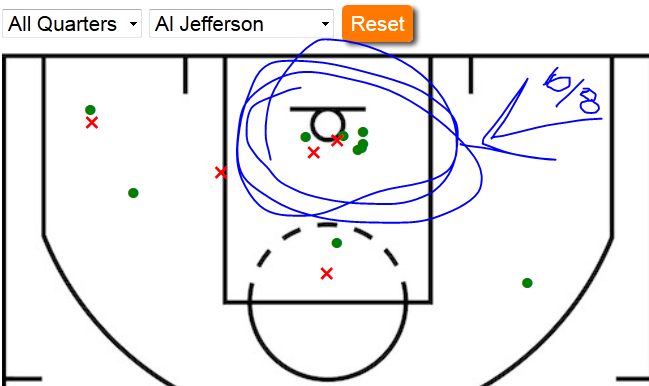 National observers will say it was Andrei Iguodala getting ejected late in the third quarter (a few minutes before the fourth). However, the Nuggets, who were up by 16 points at one point, were already losing as the Jazz climbed that mountain and took the lead when he was still on the floor. No, the game changer was Derrick Favors' play to finish the game. The starters got the team in a hole and climbed back to make it even. Favors pushed us over the top. In the fourth quarter he went 2/4 from the floor, 3/4 from the line, had 2 offensive boards, 2 blocks, and 1 assist. Derrick did more than just fill up the stat sheet, he also was playing with a high level of confidence. He was invaluable. And this isn't the first time he was so effective to end a close game. He's making a habit of this.

Diana and I talked about the Derrick Favors throw down fast break in the video; but I really appreciated that Al Jefferson ' Falling down ' moment where he just couldn't take it anymore and pushed Kenneth Faried and got a tech for it. Al was not happy. Then he got mad. Big Mad Al then wrecked their entire team. From the second quarter on Al went 6-10 shooting, and 8-10 from the FT line. Probably all of this was precipitated by Faried dunking and then staring Al down.

The Bad news is that, well, our team was getting their butts kicked in the first half, and that was our starters doing it. Yes, the starters ALSO came back in the third quarter to fight off that huge Nuggets lead -- and still had enough left in the gas tank to pull out the W. (The ending lineup had 2 starters in it) If we are perpetually starting from a hole, we're eventually going to be in one where we can't climb out of. We saw this in 2010-11. We know how it ends up.

Finishing strong is nice, but if we started that strong then maybe we could blow some teams out again . . . instead of having to claw all the way back from 15-20 down? Right?

The Jazz finish up this "month" (November + 2 games book ending trips) with a game tomorrow night @ the New Orleans Hornets, @ the Oklahoma City Thunder, and @ the Houston Rockets. And then things get better. Way better. Like 7 of the next 14 at home better. Which may not look like much, but it's better than 12 of the first 18 on the road.