The #recklessbogger Edition- The Downbeat #900

The Jazz beat the Hornets and we're all a bunch of boggers.

Share All sharing options for: The #recklessbogger Edition- The Downbeat #900

The Utah Jazz won on the road!!! Are we happy with this win? In the immediate post game reaction video My_Lo said he was, Amar said he wasn't. Jazz had moments of awesomeness and moments of blah.

New Orleans was only able to put three runs on the Jazz:

The Jazz were pretty much in control the rest of the game besides those three runs. Ty once again played with the lineups (not the starting lineup) part of it was due to Marvin Williams leaving the game due to concuss like symptoms. The rotations were different than what we saw at home.

Favors did not finish the game. Hayward played one minute less than Foye. It seemed like Hayward had the better game. I was happy to see Hayward finish the game. Kanter only had 11 minutes despite playing well. Then again Al and Paul had good games so where does Enes fit in? The minutes were highly in favor of the vets last night more than it has been in awhile.

Does it matter to you who gets minutes even if we get the win? I agree with Jason:

Since I can't embed that video. You get a video of a young young Karl Malone talking about the challenges of winning on the road and more with Chick Hearn:

How can our current Jazz team learn from what Karl Malone said in this video? Also look at him talking about starters vs bench , he's such a young kid to be starting ;)

Yesterday I did an interview on the Weber State radio station. @garsideline is the host of the show.

It was so fun to talk about the Jazz. We talk about the road trip, Millsap, the awesome teammate that is Al Jefferson, Ty's rotations etc. I was super happy and positive the whole time :)

More came out about the Deron Williams trade. It it written by Ken Berger. You remember him right the first to mention that Deron was talking to other teams and players etc during All Star Weekend 2011. Here is the quote I found interesting.

Just for fun: Which Jazz players do you think were untouchable?

Kevin O'Connor was on 1280 the other day. Moni did one of her awesome recaps.

This made me giggle:

Not bloggisists but… Some of these guys on the Internet, and boggers* and everything else, I mean, they have no accountability. And with that, they can be reckless.

It lead to this fun conversation: 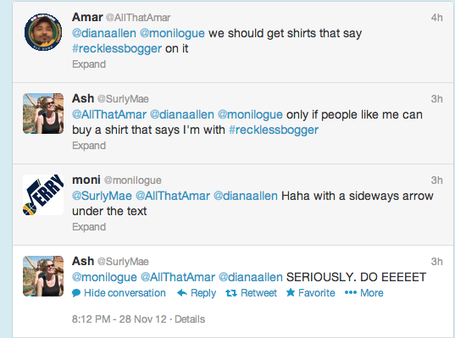