The Jazz played Alec Burks and Jeremy Evans last night. Derrick Favors and Gordon Hayward played big minutes and played pretty well. How could they have possibly lost? This Downbeat explains in outrageous levels of detail how exactly that occurred.

Share All sharing options for: Anatomy of a Loss - The Downbeat #881

Yesterday's game against the Grizzlies was an interesting one for a few reasons: not least of which was that Coach Tyrone Corbin used the lineups that Jazz fans have been clamoring for. Burks and Evans both got minutes at the expense of Tinsley and Carroll, and the "Big" lineup with Millsap, Favors, and Jefferson was used at the end of the game. Additionally, Hayward and Favors both performed well, giving the fans a good deal of what they want.

Unfortunately, the Jazz lost. How could we have been so wrong? Given this cognitive dissonance, I wanted to evaluate what really happened in the game: why did the Jazz lose against Memphis? To do this, I'll be looking at the game analytically to figure out what exactly happened.

First, let's look at the differences between the two teams in yesterday's game. While he was studying how teams win basketball games, Dean Oliver (author, former Denver Nuggets analyst, and now working for ESPN), identified "The Four Factors of Basketball Success". They are:

Oliver chooses to measure shooting by the simple stat eFG%, which is just the same as regular FG% while taking into account the fact that 3 point shots are worth 50% more than two pointers. In this game, the Jazz' eFG% was 47.2%, while Memphis' eFG% was just 44.5%. It was not a particularly good performance by either team shooting the ball, though the Jazz were slightly more efficient, making 45 shots from the field compared to Memphis' 43. Each team made just 5 threes.

Because free throws are the most efficient shots in basketball when taken by non-Andris Biedrins players, it is also important to take into account how often players get to the line and how often they make the resulting shots. One way to do this is to divide total free throws made by the total number of shots taken (FT/FGA). By this measure, or by any measure, Memphis was far more effective than Utah: their FT/FGA was 24.2% compared to Utah's 10%.

As a result, even though Utah shot better than their opponents, the number of possessions, as well as the efficiency of their possessions, let them down. The Jazz used roughly four fewer possessions than Memphis, and on those possessions, scored just 1.008 points per possession, while Memphis scored 1.051 PPP. Those two factors came together for the 11 point Memphis win.

We noted that the Jazz actually shot at a higher percentage than the Grizzlies did, but where did those shots come from? Let's take a look at the shot chart: 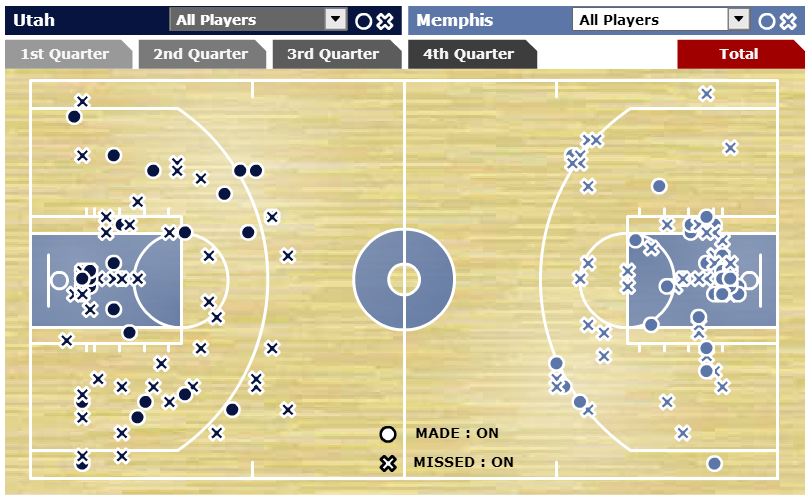 The first thing I noticed was how few mid-range shots Memphis made: just 3 makes outside of the key, compared to Utah's 9. Indeed, let's look at it more statistically, using NBA.com's advanced stats tool:

As you can see, the Jazz' percentages for the game were good or equal when compared to league average, and resulted in the shooting advantages we talked about in beat #1. The Jazz also did a quite good job of preventing good field goal percentages from Memphis, including in the restricted area and mid-range. Unfortunately, where the Jazz struggle on both offense and defense is efficient shot distribution. Memphis shot only 1 more FG attempt than Utah, but shot 4 more in the restricted area, and 10 more in the paint (though the Jazz did shoot 1 more three, good work!). That kind of shot distribution is why the percentages were as close as they were, and are a likely reason for the foul differential we see: Utah simply gave Memphis too many opportunities in the paint. Those are not reduced by fouling, but a more consistent "pack the paint" or a zone approach may address this issue.

Now that we've established what the factors were that led to the Jazz' demise, let's look begin to look at the players involved. We'll begin by looking at lineups using Popcorn Machine's gameflow of the game: 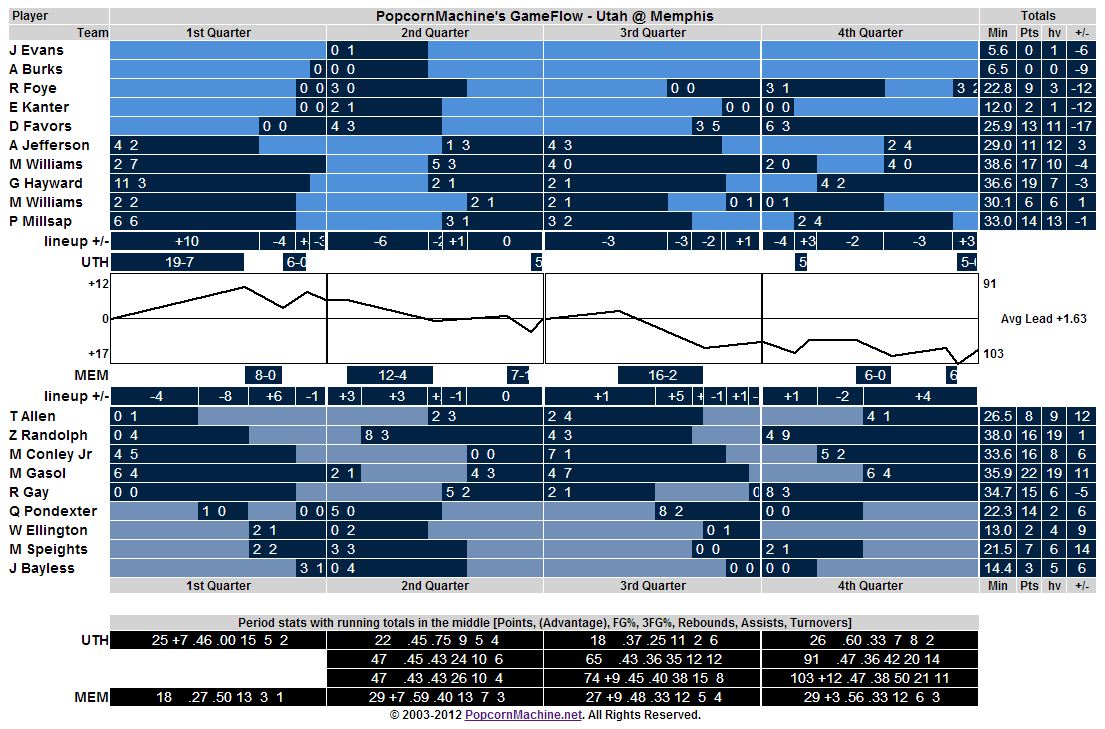 Now that we've used the Popcorn Machine Gameflow to figure out who was on the floor and diagnose what the problems were at those times, let's look at the NBA.com box score and play-by-play to figure out exactly what happened. 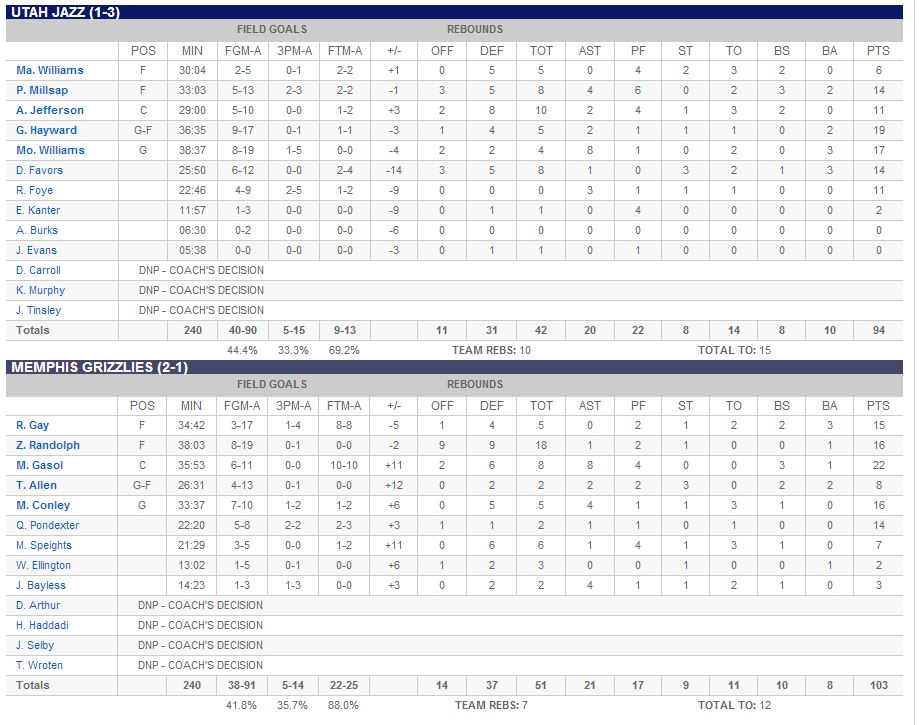 For some reason, the +/- stats don't exactly lineup from Popcorn Machine, but we'll move past that. What needs to improve?

Or, for those tl;dr people out there, the Jazz gave up possessions through a few rebounds and turnovers, and fouled too much. The Jazz are usually pretty good at the possession battle, so last night's game was somewhat of an aberration there. However, fouling remains a significant problem.

On a completely different note, Clark and I recorded the 9th episode of our podcast on Monday, this time talking about the Alec Burks lack of playing time, and what the Jazz need to do to improve. We also compiled our list of the most entertaining Jazz players, so, you know, if you thought this Downbeat was way too statistical, we have something for you too!

And just like always, you can listen to us through Stitcher Radio or iTunes.

Oh, and what do you think? What factors, in your eyes, led to the Jazz loss last night? Let us know in the comments.