The Solution Edition- The Downbeat #883

Share All sharing options for: The Solution Edition- The Downbeat #883

We beat L.A. The Utah Jazz beat the Los Angeles Lakers despite the fact that the Lakers went to the line 46 times and us a measly 18! From ESPN Stat's twitter

Last time #Lakers lost a game despite shooting 28 or more free throws than their opponent was Nov. 19, 1970 vs Sonics. (h/t elias)

This game was quite popular 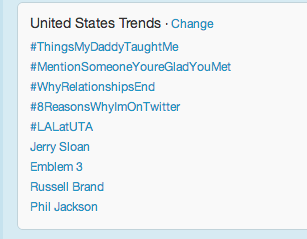 Jazz's Ex-Assistant coach Phil Johnson shared what he thought the difference was between this game and the Jazz's three road losses. Phil said the Jazz on the road were throwing the ball ahead and taking quick shots, he said you can sometimes make those but if you miss:

The Jazz according to Phil did not take quick shots, He said if we got a layup good if not we can take the ball back out and got a good play.

Another key to the victory according to Phil Johnson was our 21 assists to the Lakers 11. Phil said in the history of our franchise when we get more assists than our opponent we are most likely to win the game.

We are always happy to beat LA but shandonfan reminds us:

And my facebook/twitter friend shares this: 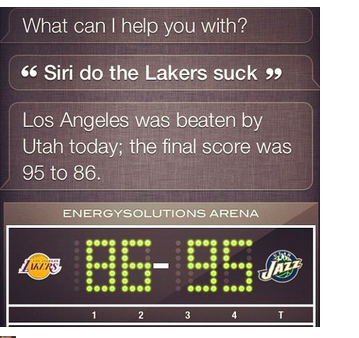 Just so you know the game was never tied and the Lakers never had the lead.

Randy Freaking Foye! Foye played for a stretch of a couple of minutes like he was playing AGAINST the Jazz. It was like a Linus Kleiza flashback. Then you remember he's playing for us and its like yay!!! In the fourth the Jazz were only up by 5 (70-65). Foye went crazy with three three's and the Jazz were once again up comfortably 79-68 (Lakers matched that first three by Foye).

Al went crazy after Foye's outburst and ended up scoring 10 points in the 4th quarter. I liked this Al though because it didn't seem hero mode or black hole mode. Al played within the offense, with quite a few give and go's with Paul.

The Lakers chemistry seemed really off. I am glad we got the win but something just didn't seem right with the Lakers.

That's fine by me. I don't mind when the Lakers are angry and play poorly. We get to enjoy plays like these:

Favors played less than 18 minutes, Kanter around 13 and Burks 9. Do we not worry and just enjoy the win? I really do like how much we have been beating the Lakers since 2011. Good times.

The Jazz are 2-0 at the Solution and 0-3 on the road. What do the Jazz need to do to get their first road victory?