The Los Angeles Lakers gave head coach Mike Brown the pink slip today. Terminating his services after 5 whole games. What is 5 games in Oct/Nov for a team built for the playoffs? It seems very petty, as 5 games is only 6% of the NBA season. The Lakers are trying new things on offense, have a number of new pieces, and are currently playing without their starting point guard. So, clearly, this was the best time to fire the coach. Why work hard and be patient when you can make a series of successive over-reactions? Smooth sailing gets you there in a straight line, but in today's world (especially in Hollywood) it's much more exciting to drift race your way from point A to point B.

I'm not the right guy to defend the Los Angeles Lakers, but I do believe that stability is highly under rated. That's the one thing our franchise had all those years -- and it was precisely that thing that helped us grow up slowly, but have sustained growth. And during that period of Utah Jazz basketball we beat a lot of flashier teams.

But at the end of the day the Lakers are pretty much all about flash. I think the main issue is that Kobe Bryant, the head inmate of that asylum, did not have Mike Brown's back. This is still a league dominated by the owners (as the lockout proved -- and their media team was way better so much so that the majority of the fans thought it was the players being greedy, but it was the owners trying to make more money, and the players agreeing to give in); however, the actual day to day seems to be focused on the stars. If your star doesn't love you, then your days as a head coach are numbered. Ask Stan Van Gundy who was twice moved from his position (with the Miami Heat, and then the Orlando Magic). Jazz fan's don't have to imagine what this is like, we lived through it. And while our local media doesn't give us all the information (for our own benefit), we know what really went down between management, our GM, our owner, our star Deron Williams, and our legendary coach Jerry Sloan.

The immediate bad guy in this seems to be Kobe Bryant. There are two sides to this story though. The first is that, yes, Kobe is the bad guy who wanted Mike Brown gone. The other story is that Kobe wants to win games, and win titles. The Lakers value titles. So Kobe is more valued, and if he feels like the dude on the bench isn't capable of helping the team get wins -- then that dude has to go. Mike Brown isn't really a winner. He was a lucky dude to coach a team with a once in a lifetime player on it (LeBron James), and he got a CoY out of the deal.

Not exactly, but I kinda understand where the Lakers would side in this fight. And that's siding with the guy who can set the world on fire / become death, aka, the destroyer of worlds.

Funny gifs aside, what does this mean? Well, if the Lakers continue to flounder then Kobe has one less guy to blame. At some point accountability has to kick in. Kobe's having a great season, and he's playing a lot of minutes. So if he's doing all this and the team is still losing -- what then? I guess the blame then goes to the GM or something like that. And that makes sense -- "hey, there's this dude who assembled drool worthy talent; so blame him for not also finding a way to get them a talented bench."

It's really a no-win situation in LA-LA Land if you're not Kobe it seems. Because it's not Kobe's fault, it's Dwight Howard 's fault for not knowing what to, Pau Gasol 's fault for being passive, and Steve Nash 's fault for being injured. If Kobe wants to be like Mike then he needs to do more than get good stats and bad coaches fired. Michael Jordan would be winning with this crew. Ball's in your court now, Bean.

As an aside, as a Jazz fan this is interesting to see. We are a small market team that will never have these types of problems. Our coaches have the support from the franchise. Our players are never at the risk of playing with three other Hall of Famers. And our franchise doesn't make knee jerk reactions. So in this case, this is specifically a 'grass is greener' type of day in Utah. We have made it part of our religion to complain about how unfair things are because we can't attract top level talent, or spend, spend, spend.

Let's remember this day for a long time Jazz fans -- it's not a championship. But it's another case were our under appreciated team knocks off a team that is regarded as better than us, which results in that team firing their head coach. This has happened a few times, one example being Doc Rivers (a CoY at that point) being fired by the Orlando Magic. We also did this to Sam Mitchell (another CoY) back when he was with the Toronto Raptors. Now CoY Mike Brown is on our list. I guess this is like the ultimate Old Mummy's curse, or Jerry Sloan 's Revenge. (Sorry Montezuma)

The Lakers are a mess right now, but being in LA, and coaching four HOFers is still attractive. There are a ton of coaches on the Lakers' list according to twitter. David Locke spoke with Jerry Sloan and he had no comment on this situation. What do you think he'll do? And who do you think the Lakers will hire?

And more realistically, who else can the Lakers blame but the players themselves at this point if they continue to play under their collective abilities moving forward?

UPDATE: Because somehow I get a ton of emails a day from people more connected than I am . . . 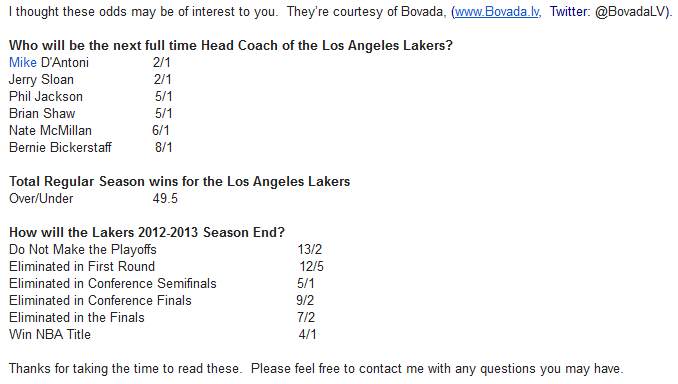 This just was mailed to me. Welp.