And it's the surprising matchup between two teams that made the playoffs in the Western Conference -- despite both trading away their franchise player recently.

Both of these teams are 2-3 right now, and trying to make a name of themselves early on this year. Both have talent, depth, youth, and strange foreign players.

Last season these two teams played three times last season, with the Jazz getting blitzed in the first game (our second of the season) on their court; then coming back and winning the next two (one at home, one in their gym).

Of course, this was the series that brought us "The Hug, Part 1".

It's going to be a battle of contrasts and I'm worried. Denver usually kills us by running in the first game of the season series. We need to slow it down and pound it. They aren't as big as us. They aren't as talented as us in the paint. Even while we are trying to run more, and take more threes, the path to victory tonight has to be through our bigs. If they get us in an up and down game, we may never catch up.

We've seen it before. I don't want to see it tonight.

I know there are a ton of great Nuggets fans -- but to me no guy is more honest and willing to be honest about his team than J.R. You know him on twitter as @Smooth_Operatah , or the guy being unreasonably yelled at by Matt Moore.You can read his work here at Smooth's Hoops. 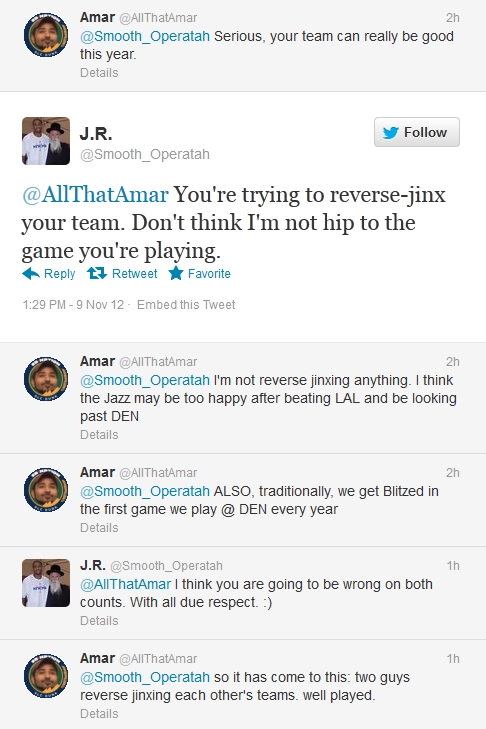 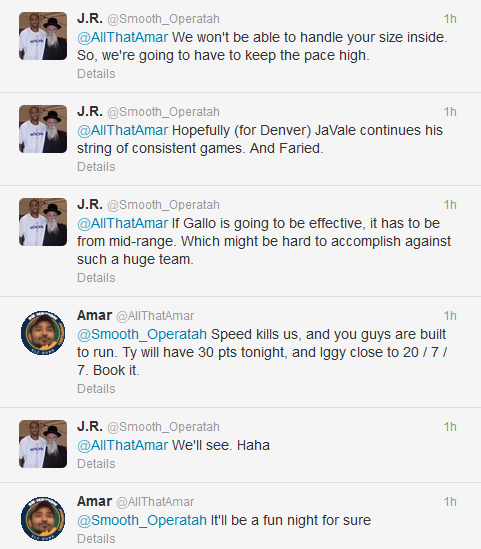 I really think the team that is able to establish the pace of play will win tonight. He fears our bigs. I fear their speed. The other unsaid thing beyond fear is that we both respect each other's teams.

C'Mon. It's gotta be Alec Burks. He's went to school there and he really goes nuts on them. Out of all the teams in the NBA, Burks scores the most against the Nuggets: 13.3 ppg, 11 FTA in 3 games, and shooting 61.5 fg%. (1.54 PPS because you know I was going to do that calculation) And he's doing this is only 15.6 MPG. He's playing way more MPG against some other teams, but he's not going for the jugular there.

Ty Lawson and Andre Iguodala are two guys many Jazz fans have wanted for a long time. We'll see them up close and personal tonight.

Jazz win. Why? Because it's a rivalry game against the hated Nuggets. We need to build some momentum, and after beating the Los Angeles Lakers -- we'd put the L on notice with a win in Denver. We have a lot of road games this month, and we are still looking for our first W outside of the 'Solution. It has to start tonight.