Houston, if Jeremy Lin has a PER of 12.6 and is making $8.4 million dollars, then you have a problem.

So far this season the Rockets have kicked it into overdrive -- being the 5th best scoring team in the league by points per game, despite having the 10th best rated offense. The difference? Their pace. The Rockets play at the fastest pace in the league. (Checking twitter seems like I'm not the only person to say this . . . as Locke just tweeted the same thing.) So far this season Utah has played the style of game the other team wants to play, I wouldn't be shocked to see an up and down game tonight. In fact, the Rockets should try to do that as tonight is the second night of a back to back for the Jazz, and the third game in four nights.

A smart team would TRY to do that, especially with our current injuries.That said, both teams have injuries.

These two teams play four times this year, and have already played once. The game's final score looks closer than it actually was, as the Jazz won 102-91 in Salt Lake City. It was a rout as the Utah stomped on Houston 32-18 in the second quarter and James Harden took himself out of the game at halftime. The Jazz shot 43% from deep, blocked 11 shots, and had 55 total rebounds. It was vicious. Tonight, I guess, is payback. Historically the Jazz are 97-79 against Houston, but only 36-52 on the road. Last year the Jazz won the season series 2-1. 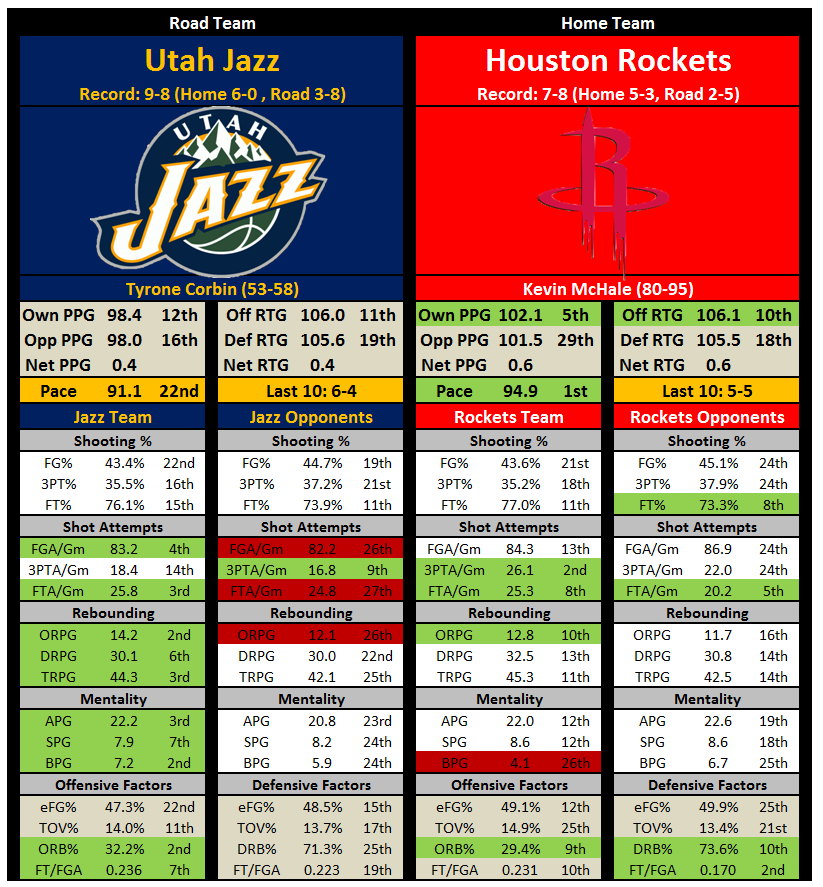 The interesting thing here is that the Jazz (even though they've played 11 of 17 on the road) are the #3 team in going to the line overall, and have the 7th best FT/FGA ratio in the league. On the opposite side, the Rockets are 2nd best at NOT sending the other team to the line, as they have the 2nd best FT/FGA ratio on the opposite side of the spectrum. Both teams are solid rebounding clubs, the Jazz are better - but Houston is no slouch on the offensive glass.

This game is going to be all about free throws and rebounding. That's not just because of the team stats, that's just how these games always end up being decided by.

Delfino and Parsons are good guys, but I don't think they are important to the Jazz are Marvin and Derrick. I'd give the Rockets the advantage here, when you couple it with their rest and how this will be our third game in four nights . . . it's clearly in their favor. I will update this as necessary throughout the day, though.

In the first game we only got a sick James Harden for half a game. Tonight he's going to want to come back strong, avenge his poor performance in the previous game, and somehow make up for the blowout loss they took a few nights ago against the Thunder his in "return game". This could be a very emotionally charged game for them as it could also be the return home game for Kevin McHale who had just lost his daughter to an illness. Talked with my bestie Rockets fan, McHale is not set to return yet.

And it's another road game.

So it's not going to be easy, but it would be great to get a win.

The Rockets like to run. With Omer Asik they get a ton of boards on the defensive glass (they are #13 in the league, and Omer gets 8.5 defensive rebounds a game). That's step one. The next step is to have some fleet of foot ball handlers who like to run -- they have that with Harden and Jeremy Lin. Step three is to have good floor spacing in transition and a bunch of spot up three point makers. They also have that with Harden, Delfino, Chandler Parsons, Marcus Morris, and Daequan Cook. Heck, add Toney Douglas to step 2 and 3 here as well. Spot up threes off of halfcourt dribble penetration and transition threes are the first two courses in Rockets basketball this year where they don't have a back to the basket big. They are #2 in the league in hoisting up threes this year, at 23.1 three pointers a game.

Defensively they are in shambles. They are #29 in opponents PPG, and #18 in defensive rating. If we can slow down the game (and God help us, we really need to control the tempo of games), and limit the number of possessions, then their attack is less awesome; and it focuses on half court execution.

Al Jefferson is really good at scoring in the half court. We're going to need him to be effective tonight if we're going to win. So that means slowing it down. They can't handle us if we slow things down. (So, predictably, I expect this game to be an up and down affair that neutralizes our best scorer . . . )

Enes Kanter has to be the man to step up tonight. Especially after he poured in 18 and 7 last night off the bench in only 15 minutes of action. He's a legit 6'11, wide body -- and lottery pick. If people are finally going to move beyond Paul Millsap and Big Al it's going to be because Derrick Favors and Enes Kanter consistently show that they're better than the #3 and #4 bigs on a team. If Kanter and build on his good play last game with another solid outing it'll be in everyone's favor, especially Derrick Favors who hurt his foot last night.

In the first meeting between these two teams Kanter scored 6 points (3/5), had some dunks, and grabbed 8 rebounds, swatted 3 shots, and dime 3 times in 21:21 of action. It was the type of game he's capable of having against the likes of Omer Asik, Patrick Patterson,, Terrence Jones, and crew. I want to see that again tonight.

No one wants to mention it, but this season a huge saving grace for the Jazz this year has been that the other team is missing a lot of free throws. Our opposition is making only 73.9% of their free throws this year, which means the Jazz are ranked #11th best in the league at that. Our opponents have gone 312/422 (missing over 100 FTs) in 17 games. That's missing -6.5 extra points per game for the other team. That's big when you consider our margin of victory is razor thin right now.

Of course, I'm also going to mention Alec Burks here. Depending on how deep we are tonight we may actually get to see Alec play in back to back games. If so, much of what I said about Enes comes true here too. He's going to have to continue playing well and build on the momentum of his last game. He didn't have a great game against the Thunder, but he did the things on the court that distinguishes himself from Randy Foye. You can't beat Randy Foye at being Randy Foye. Yes, you went 1/3 from downtown; but what makes you more interesting is your defense (man defense, plus steals and blocks). These are things Randy didn't do last game. Do more of that.

I felt like the Jazz had a shot to win 10 of their first 18 games. And we're right here. If you actually look back at what I predicted back in July you'll see that I'm 100% right for what we'd be going into this game (scroll down to Amar's July Predictions in the November section). Of course, after the preseason when I did my preview of October and November I thought we'd be at 12 wins. But after the month started I re-evaluated where we'd be after this game and I said 9-9 waay back on November 22nd. So what did we learn from this? We learned that optimism aside, this is where I predicted we'll be. I'm not the only one to predict this mark, but I was one of them. But hey, I'm not going to crow about it. I know my team and I know my basketball.

Jazz win, why? Because the Jazz finish strong and I hate the Rockets. That's why!