The Spurs bring their NBA best 18-4 record to The Solution tonight. Oh, and that 18-4 includes 11-2 on the road. Tonight will be another test of this team that is, somehow, surprising a lot of people... again. You know who used to work for the Spurs? Dennis Lindsey. The Trib's Bill Oram has a great article about DL and there are some very complimentary things about the Jazz org in there. What's impressive is that its not the usual Jazz employees patting themselves on the back compliments, this came from RC Buford.

"We recognized that any success that we wanted to have would have to go through Salt Lake City," Buford told The Tribune during last year’s playoff series. "

That's saying a lot. It also means that they know they have to respect ANY Jazz team when they match up in SLC. Hopefully we can reaffirm that sentiment tonight.

If you don't follow @Jashin_Mizuho, you are missing out. Yesterday our favorite Japanese Jazz blogger dropped illustrations for the entire team, for the 12-13 season, and they are fantastic. 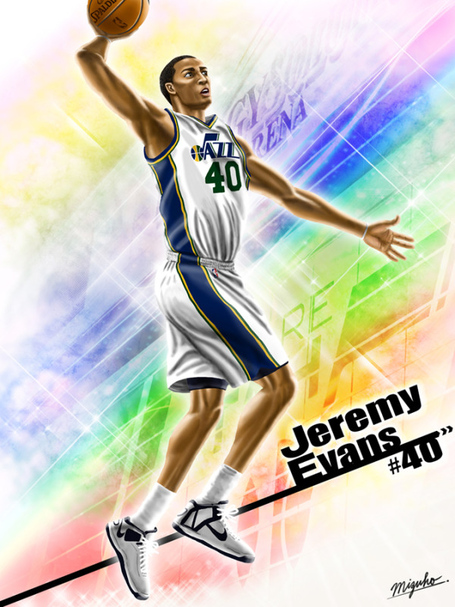 Check out all of them, and the reactions of the players themselves. This reminds me that we have some really amazing artists that are part of the Dunk Family. Adam (@prodigyJF) does great videos, Moni is a photoshop guru, and Sean (@spidergraphics) has been doing awesome illustrations on his tablet.

If any of our other readers have any art they'd like to share, hit me up on Twitter (@prodigal_punk). I want to start showcasing all of your talents once a week

This isn't Jazz related, but it is something I have been following closely. The situation in Sacramento remains perilous and our SBN brother Tom Ziller wrote this great article about the owners of the Kings, the Maloof family. Specifically he talks about the relationship of the 3 brothers (Joe, Gavin, George Jr.) and how that affects this situation. Check it out ASAP: http://www.sbnation.com/2012/12/11/3754092/sacramento-kings-relocation-maloofs-divided-hook

You can find out some really interesting things by heading over to Basketball Reference and sorting through the numbers. We're at the quarter season mark and here's a few that stand out: