Share All sharing options for: Jazz Legend John Stockton demands your attention on 12 / 12 / 12

Today is December 12th, 2012 -- or alternatively 12 / 12 / 12. Additionally, today is a special day in the sports world to talk about the special number 12's in your lives, Paul Swaney wrote a great post on the Top 12 Stadiums where the Number 12 is Retired over for StadiumJourney.com, and you should check it out. We're all trying to do our best today. This is the best Utah Jazz site not named JazzFanatical.Wordpress.com on the internet; and as a result, it's SLC Dunk's pleasure and duty to talk about the best player ever to wear the #12 in professional sports (sorry Joe Namath, Wade Boggs, and Roberto Alomar). Today is a day to talk a little more about John Stockton.

Did you know that John Stockton continues to be criminally overlooked and underrated today by the news and entertainment media that exists to get things right? Take for example the "Holy Grail" of the combined news / entertainment nexus -- 2K Sports' NBA 2k series of basketball games which serves as a tool to shape and educate younger minds on the history of basketball. In the latest installment of this product John Stockton:

I could go on and on and list more of their failings, but I already have -- and we both know they're not going to listen to some 'loser Jazz fan with a blog'. After all, the Jazz don't matter and so our players should be under rated in a theoretically objective product. (Shawne Williams and Daequan Cook have higher dunk ratings than The Mailman. So does Gordon Hayward.) But let's move away from the simulation and actually look at what REALLY happened in NBA history. Let's look at actual, not hypothetical or subjective, data.

Let's look at the stats. And pick 12 games out of Stockton's career to look at, understand, and appreciate. These aren't that "random", they are amongst his best in his career -- but they happened in the regular season and playoffs alike, were against mostly good to great teams, and happened over the span of his entire career from age 25 to age 39. Behold: 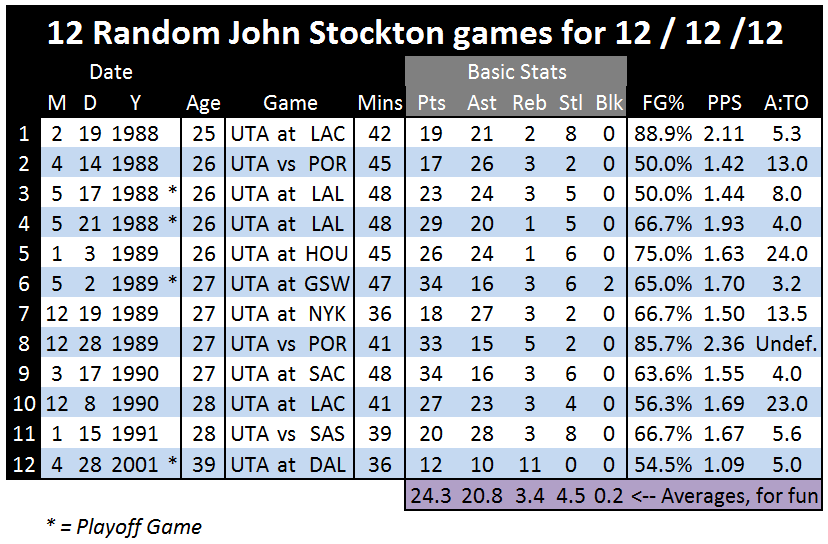 Yes, Stockton was absolutely dominant. But people still think Tim Hardaway or Kevin Johnson were better. (They weren't, and if you think that then you are wrong). Today Rajon Rondo gets 20 assist games, he has 5 total in his career. He's never had a 20/20 game. Stockton had quite a few (11), I didn't list them all above; nor did I list all of his crazy 20 assist games (38 in total). Let's look at that again, Rondo has 5 games of 20 assists, Stockton has 38. Stockton played a loong time and Rondo is still in his 20s, so time will tell.

It's not just about the assists though, Stockton was a more than capable scorer when he felt the need to; in these 12 games he averaged 24.3 ppg and 20.8 apg. If this was a bigman getting 20/20 games we never would hear the end of it. But because this is Stockton this is sadly overlooked.

It's also about his steals though -- Stockton was effective at on the ball steals, help defense steals, and passing lane steals. Some guys can do two of those, but not all three. Stockton did it at 6'1 with non-7'1 wingspan arms that some of today's guards have (like MarShon Brooks).

John was great, and continued to do great things till the end of his career -- recording a triple double in the playoffs at the age of 39.

What does it mean? It means I've been watching Ancient Aliens again and learned how to throw out stupid co-incidences and link them together poorly to build a convincing fantasy. 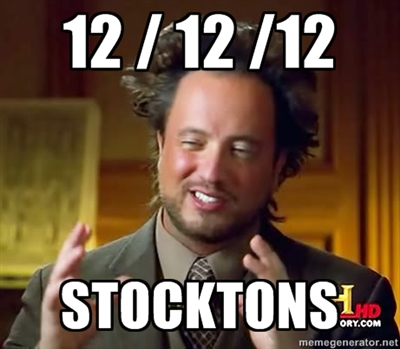 All Hail John Stockton! You are sadly under rated, which is hard to argue for someone who is in the Hall of Fame, was part of the Dream Team, a member of the NBA 50 Team, a multiple time All-NBA and All-NBA Defense guy, who owns two All-Time records and has his own statue. But it's true. You are under rated. So we Utah Jazz fans will be here, online, to extol your virtues.