Jazz going for their 5th Road win of the season!

The Jazz start off a back to back set tonight with a game against the Phoenix Suns, then fly back to Utah to host the Memphis Grizzlies tomorrow night. Phoenix is the the middle of a five game home stand and did not play last night, and do not play again until Monday. So . . . yeah. Rest, and stuff.

The Jazz are on the short end of the stick when it comes to our career history against the Phoenix Suns -- they have the lead of 86-73. They are a superb 56-22 in their gym. We had a pretty heated season series last year and blew them out earlier this season. No doubt they haven't forgotten about the 94-81 drubbing we administered. (Wow, it seems like we won by more than just 13 points -- I guess in this economy 13 points is a blowout.) In that game Luis Scola got his, we stopped their three point attack, and held Marcin Gortat to 1 point. We had an all-around game and won it without Mo Williams (injured). Al Jefferson and Paul Millsap combined for 45 points, 27 rebounds, 3 assists, 3 blocks, and 2 steals. If they continue to have big games against Phoenix we could see similar results tonight.

That game was a long time ago, it was back when Randy Foye was coming off of our bench. 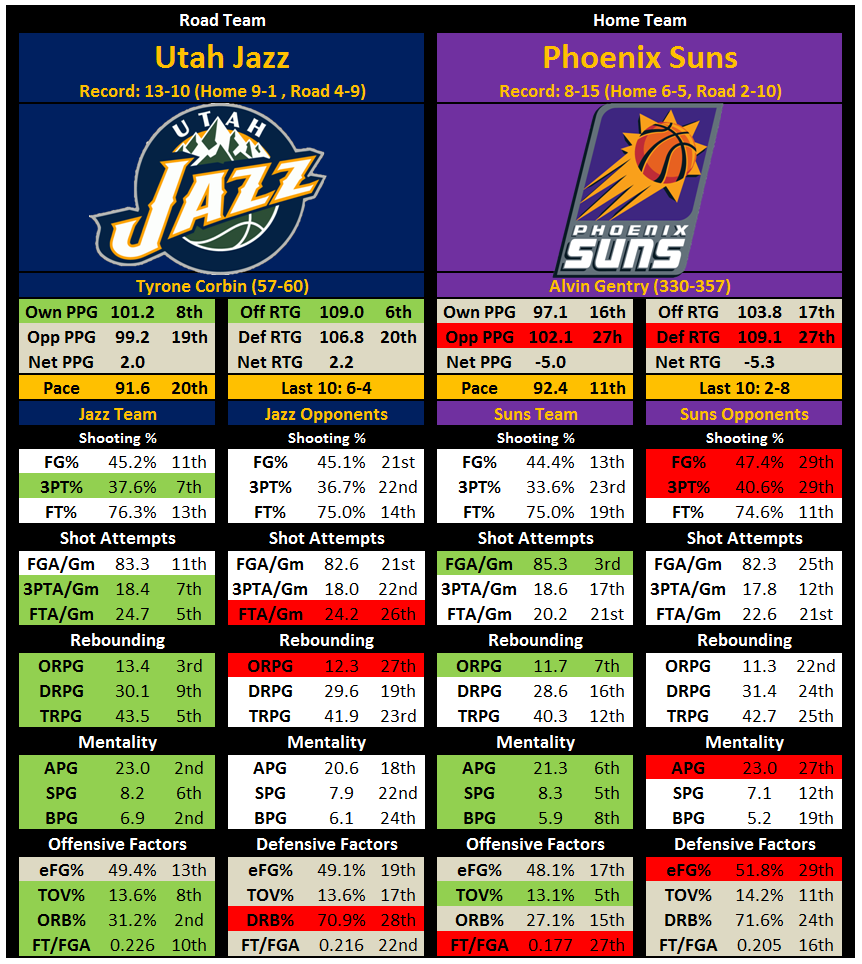 The Suns aren't terribly good on defense. All those red things means they are bottom 5 in the league. They are really bad at making the other team miss. And they seem to be obliterated by team play, and teams that work the ball to get good shots. That's precisely what we've been doing this run. So, hooray for us! Phoenix gets a healthy amount of offensive rebounds this year and that's how they score. So they score like we did last season.

We're a strong rebounding club, but could get better. We get to the line but send the other team there as well. There's a give and take, we want to play a physical game but can also make threes. If the refs call it tight we'll still play physical and just get called for fouls.

The Jazz have the advantage here, as we're finally healthy. And the Suns are without one of their best guys for establishing crazy floor spacing.

We're on the road. We're looking for our 5th road win. I really don't have the heart to write that much more right now. my mind is . . . elsewhere.

Derrick Favors has had his way with the Suns bigmen of late, especially on defense. Tonight will be his second game back since his injured right foot waaay back on the road against the Houston Rockets. Can Favors, with a bad wheel, still be a defensive force? Tonight we're going to get a chance to see. Al Jefferson has been cooking of late and Paul Millsap has returned to form. Enes Kanter is emerging in his own way. If our fearsome foursome is going to be able to wreck other teams we're going to need Favors to exhibit some of his talents. What better team do it against than the Suns? 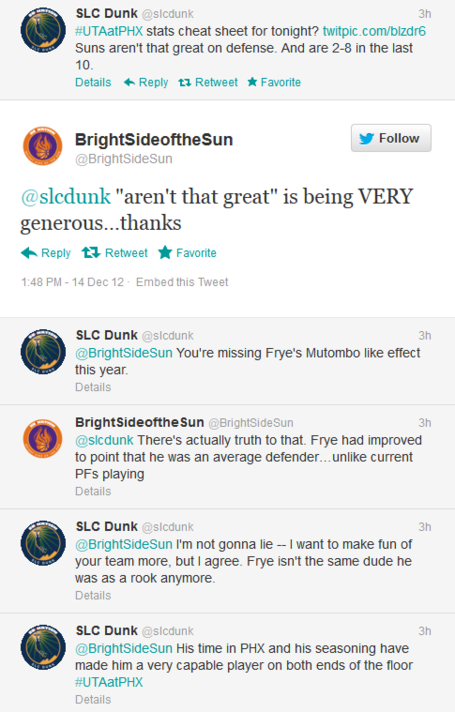 What ever happened to those Phoenix Lights things?

Jazz win, why? Because we're a better team. We are stronger on the glass. And while we're not great on defense, we're not horrible. The Suns are.