I'm tired and I want to take a nap. Oh? You mean basics of this game . . . okay okay . . . well, the Memphis Grizzlies are a super talented team that's lost three in a row and will be looking to get their roar back. We're a team of question marks that have one less win than Memphis, but somehow 5 more losses. We also just had our streak snapped, and will be hungry for a win as well. Sidney Lowe used to be the head coach of the Grizzlies. DeMarre Carroll was drafted by Memphis and used to play there. Earl Watson and Jamaal Tinsley also used to play for the Grizzlies. So . . . there's also that to factor into the equation (you used to have me, but look at me now!).

Since the beginning of time till now, the Jazz are 46 and 18 all-time against the Grizzlies. Furthermore, the Jazz are 26-6 at home. Last season these two teams played twice with the Jazz winning 2 of 3. Most recently these teams played each other in Memphis last month with the Grizzlies winning 103-94. It was the typical grind it out game we come to expect.

The only thing I remember was suffocating defense, and then darkness. 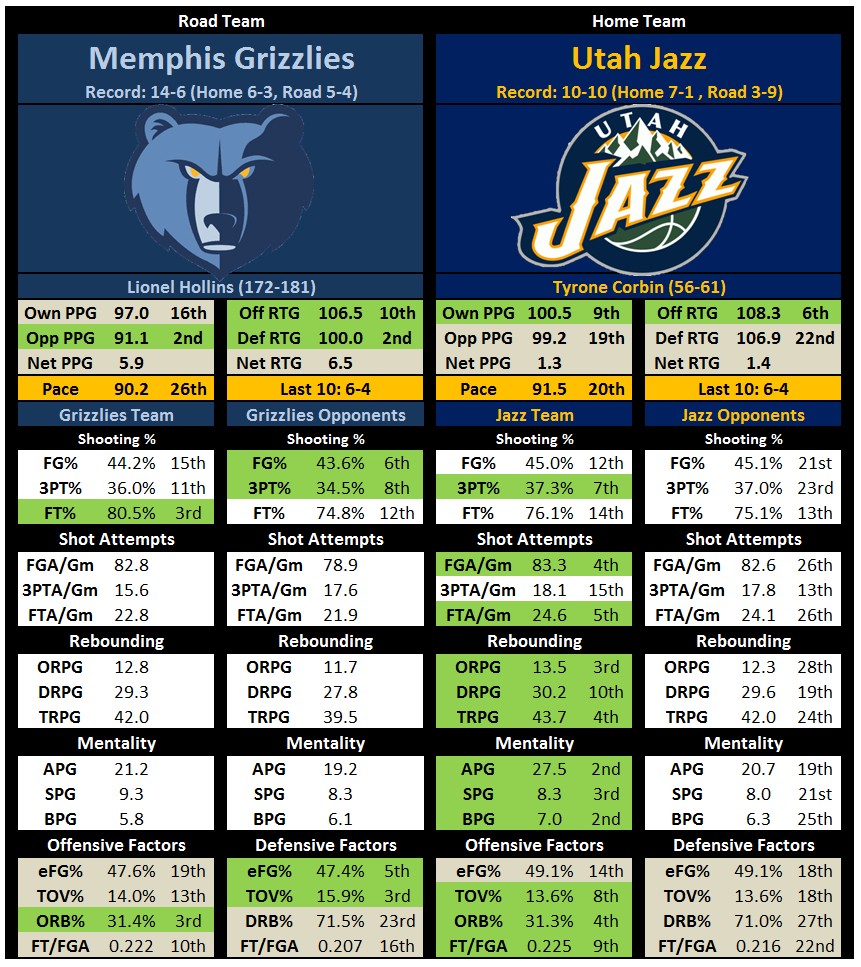 We're good on offense. They're great on defense. I did not include values for most of Memphis' stuff because they've only played 20 games, and that sample size puts them at a disadvantage. If I wanted to spend an extra hour on this post I could have re-calucated all of their stats and projected them more accurately. Instead of that ALL YOU ARE GETTING is their up-to-day per game stats, and not their per game stats and NBA ranks as well.

I guess this is me pushing my will upon an impressionable Jazz fan base.

Anyway, The Grizz do a lot of things right, and it starts with their defense. Teams shoot poorly against them because they rotate well and help each other out. It's a team defense that's the backbone of this squad. Everyone is long and mobile and they create a lot of turn overs (3rd best in defensive TOV%), which leads to 9.3 spg, which leads to fast break counter attacks and easy points. They play the game the right way.

They're also very traditional in their offense. In a way, they're basically the Jazz. But with higher profile players who play defense.

While this year's Jazz are not killing it on defense, we know a thing or two about offense as well. We are a superior offensive club and among the league leaders in a number of important categories like three point %, offensive rebounds, assists per game, and free throw attempts.

This game has all the markings of a great game -- if both teams are clicking.

I am assuming Arthur will be okay, so there's no advantage here. Expect well, beyond the fact that Raja Bell has seen the Hobbit.

Both teams played last night. So, well, both teams may be tired. Both teams also are looking to avenge losses. The Jazz had their win streak snapped by the Phoenix Suns. And the Grizz have lost three games in a row, most recently to the Nuggets. The game is going to be won or lost in the paint. I expect both teams to be short on their jumpers tonight.

Gordon Hayward, doubly emboldened by his 0/5 shooting night and his Butler Bulldogs' stunning upset of the Indiana Hoosiers, needs to come up big tonight. Dude is that 'do everything' guy we need to have playing at a high level in order to beat these Top power teams. The extra good news is that he seems to give Memphis fits. He has a career line against the Grizz of 13.1 ppg, 2.7 rpg, 3.0 apg, 1.0 threes made, a block or steal a game, all the while shooting 53 / 47 / 88. And he's doing that in under 30 minutes of action. Sure, there are some other teams he has boarded more against, or dished more against. But he's never shot better than he has against Memphis, and seems to get up to play against Rudy Gay and company.

A motivated Gordon knowing he has to step it up -- it's exactly the type of Gordon we need if we want to break out of our losing slump. (One loss on the road to Phoenix = a slump now, if you read twitter last night)

Whoever does that tonight will have a distinct advantage, because both teams main scoring comes form inside the paint as well.

The, I guess, true X-Factor would be outside shooting. Traditionally both of these teams are wanting in that arena. If Randy Foye can show his worth tonight and bomb away -- we could pull away. Of course, Memphis is great in defending the three. So, it's going to be a tough game. Whomever wins these small fights will win the war.

Earlier today I posed this question to Tom Lorenzo -- the main man at Straight Outta Vancouver. 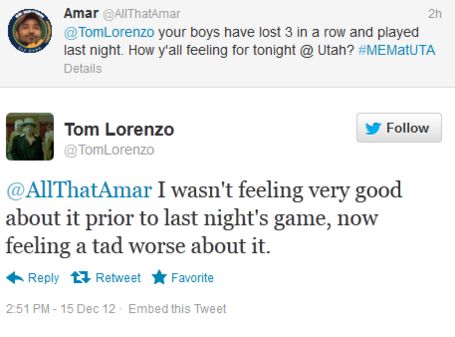 It would seem like we've stumbled onto a fan base that is just as worried about tonight's game as we are. I guess we small market NBA fans aren't that different after all. (Except those dudes down in OKC, seriously, screw those guys.)

Additionally, I did notice that this is our 25th game, and the Grizz have only played 20. That's not an equal number of games. Josh, the boss at Three Shades of Blue had this to say: 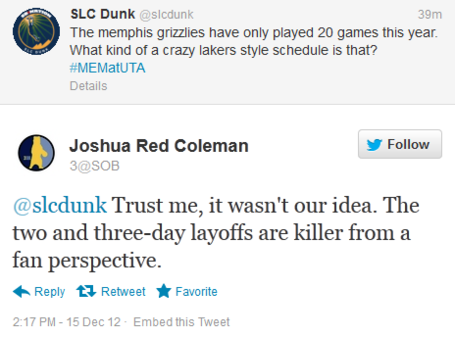 Welp. I guess he's right though. In the end we all play 82 games, so why am I complaining?

I'm pretty sure I'm the only person who is reading this who actually used to follow the Vancouver Grizzlies. I used to watch them on TV almost every night in Canada. Not just their first season either, for their first few. What I saw was a young couch who was super dependent upon his 'win now' group of starters. I haven't talked about this because I'm one of the few vocal supporters of Tyrone Corbin -- but I see a lot of early Lionel Hollins / Sidney Lowe in him. Those two coaches would play guys like Michael Dickerson and Shareef Abdur-Rahim all game long and they would be gassed at the finish.

I think Corbin doesn't make the same exact mistakes which is good; however, there are some similarities. Perhaps this is just the way of young coaches who feel pressure to win now. In their place I am sure I would lean heaviest on the guys who produce now too. After all, a coach isn't likely to be on the team as the coach by the time the guys who need more time to develop actually develop. The Coach has to look after his own interests too.

Jazz win, why? Because we're at home, and I don't expect Gordon Hayward and Randy Foye to go 3/18 again.