Let's Get More Offensive - The Downbeat #915

Let's get a little more offensive. In basketball, I mean.

Share All sharing options for: Let's Get More Offensive - The Downbeat #915

Let's start with a weekly recap of where the Jazz stand as an offensive team and a defensive team: 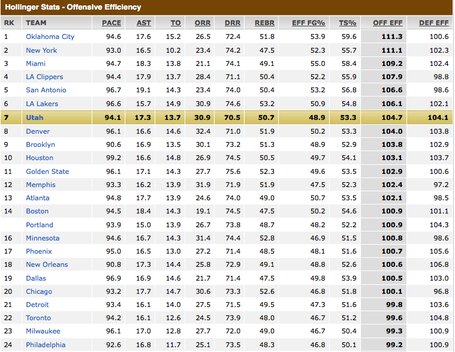 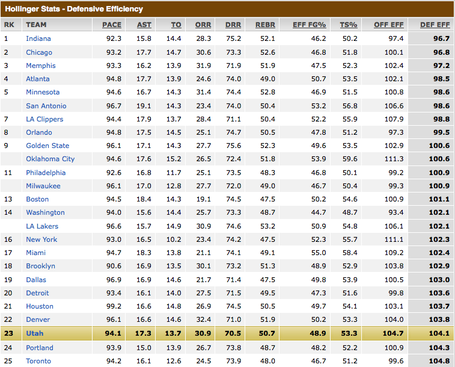 I think when you look at the above efficiency ratings, you immediately think of how much the team needs to improve defensively. You won't find any argument from me there. But I think we fail to talk about how much the Jazz could/should improve offensively. Seventh place seems great, but if you look closer, you will notice that the Jazz are actually closer to the 24th team offensively than the first or second, just to put that into perspective for you.

I was pondering about the Jazz and their offense earlier, as I sometimes do, because I'm sick and need help, and I thought about something Mike D'Antoni said during his introductory press conference with the Lakers. To paraphrase, he said that posting up is an inefficient way to use an offensive possession. Is he right? And what does that mean for the Jazz?

For those of you not familiar with Synergy, they take a look at game film and attribute every offensive possession to one of these types of plays. Of New York's 2350 offensive possessions, they score 1.01 points per possession, which ranks 1st in the NBA, tied with Oklahoma City. Isolation plays makes up 15.9% of their total plays and each isolation play gets them an average of 0.83 points per possession. You can use your best ACT test taking skills to figure out the rest. Just for reference sake, their is an "other category which makes up 5-8% of any team's offense not included here. Probably desperation heaves and such, which is inefficient and not included. But here are NY's most often used offensive possessions:

So if you were paying attention, you may have noticed that post ups aren't really that efficient, but we are the only team of those teams that uses post ups as often as we do. We score 0.83 points per post up possession which is 16th best in the league, but not really that good. For instance, we are more effective off a pick n roll that leads to a pass, off spot ups, off screens, off hand offs, in transition, off offensive rebounds and off of cuts, which is our best use of an offensive possession right now, which shouldn't be a surprise given our history of the flex offense. In fact, running a post up heavy offense would ideally lead to more spot ups and cuts, but we end up settling for actual post ups shots too often, in my opinion.

Do you want to see something ironic? Here is how Al Jefferson uses his individual offensive possessions:

Al Jefferson uses nearly half of his possessions to shoot a shot out of a post up, which is an enormous number. Yet he only scores 0.79 points per possession, good for 46th best in the league. But look how good Jefferson is when he gets a feed off a cut, or off a screen, or even in a pick n roll situation. Why are we letting him post up so much? It's simply hurting our offense. There is no other way to explain it. Just for reference sakes, here are Paul Millsap's offensive possessions distribution:

I saw this tweet come up and became pretty excited, as you may have as well:

This is one of the worst kinds of reporting. This seems pretty definite, right? Report: The Jazz WILL deal. Please. Here's your report from the article from Marc Stein of ESPN:

It’s a working assumption in front offices all over the league that the Jazz will trade Jefferson or Millsap for a front-line point guard at some point in the next 10 weeks. For two reasons.

1. Jefferson and Millsap will be free agents in July, meaning Utah risks losing both without compensation if they’re still on the roster beyond Feb. 21.

2. Derrick Favors and Enes Kanter are the undeniable power players of the future in Utah, even though Jefferson is one of only five players this season averaging 17 and 10 — along with Dwight Howard, David Lee, Kevin Love and Zach Randolph – and despite Millsap’s status as the most productive forward from the 2006 draft not named LaMarcus Aldridge.

Just horrible. Nothing new. It's an assumption. That's how it WILL happen changes to it is ASSUMED it will happen with only one link click.

David Locke tweeted out some numbers about defensive rebounding with the whole team yesterday, but I was interested in some of his other stats on the table. Was he secretly trying to send fans these numbers without drawing attention to them? Is there a pattern in there to find? Pardon me, I've been watching a lot of Sherlock lately. 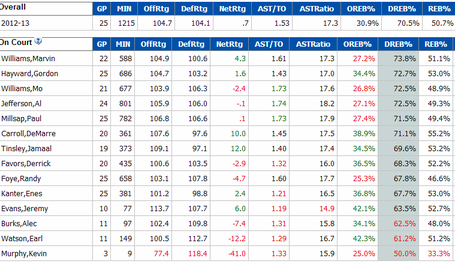 I've talked enough in this downbeat, so I will refrain from commenting to much on this table, but take a look for yourself and see what you find. Let's just say that the evidence against Randy Foye playing more than spot minutes is starting to pile up a bit.

This week's version of Fake trades in the Association: