The Offbeat ♫: The Competition in the Western Conference

The Western Conference is closer than ever, with only 2 teams with fewer than 10 wins. What does this mean for the Jazz' playoff hopes?

Share All sharing options for: The Offbeat ♫: The Competition in the Western Conference

After Monday's games, here's the NBA Western Conference as it stands now. 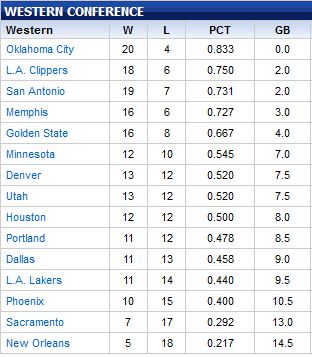 You'll notice a pretty incredible dearth of bad teams: only 2 teams with less than 10 wins, only 2 with a less than .400 record. Furthermore, only three of the 15 teams are actually bad: LAL is playing pretty significantly below their talent level, and Dallas has their star coming back in the next few weeks. It might be reasonable to expect both of those teams to come up to above .500 during the course of the season. Really, that means that it's possible 11-12 teams end up above .500 by the end of the season in the Western Conference.

That, should it occur, would be unprecedented in the NBA. The highest number of teams that any conference has had above .500 in one season is the 10 featured in the 2000-2001 Western Conference. That year's West looked like this:

While that's unlikely to continue, it does reflect another quality about this Western Conference: it's pretty easily broken into tiers. The top 4, Memphis, LAC, Oklahoma City, and the Spurs all look like excellent teams, and while a mid-season dropoff is possible, those 4 teams have been playing basketball at a higher level than the other teams in the conference. After that, there's a huge mass of average-good teams: Minnesota, Denver, Utah, Houston, Portland, Dallas, and LAL. All of those teams currently project to have a record within 4 games of .500.

This drop reflects that, while the conference is very competitive, there's actually not very much parity compared to seasons past. One measure of parity is the simple statistical method of standard deviations, to figure out about how spread out the teams' win-loss records truly are. This year's NBA is on pace to have the highest spread of winning percentages for all teams since 1997-98, when the Western playoff race was merely a formality: there was a gap of 14 games between the 41-41 eight seed Houston Rockets and the 27-55 nine seed Sacramento Kings. This year's West, instead, has a gap between the great and the average: meaning there are probably eight teams with serious ideas for making the 4 bottom playoff seeds.

This means that if the Jazz' definition of success this year is "making the playoffs", one or two wins will absolutely make the difference between a goal achieved and a failure. Yes, "every win matters" is a cliche at this point, but in these circumstances, small acquisitions or decisions could swing the Jazz' fortunes. Whereas normally you may overlook struggles from your backup PG or the lack of a 5th big man in favor of a focus on the bigger picture, this season's West competition means that those smaller issues should become real priorities for the team.