Gordon Hayward Homecoming Dance will be happening directly after the game.

Both of these teams have big flaws, but have very similar records. The Pacers were the last home for Kyrylo Fesenko, so that's pretty awesome. Earl and Jamaal also played there. And oh yeah, it's Gordon's homecoming. So it's going to be a big game. The Pacers didn't do anything crazy this off-season, but they did trade for Ian Mahinmi, resigned Roy Hibbert and George Hill, while drafting Miles Plumlee. They also added D.J. Augustin, Sam Young, and Gerald Green. See, nothing crazy. But still, significant enough to stay in the playoff race in the East after losing Darren Collison, Dahntay Jones, and Louis Amundson. And Fesenko.

The Jazz and Pacers were two of those great 90s franchises that couldn't get over the Chicago Bulls. Overall the Jazz lead the series 38-36, but are only 13-24 on the road. Last season these two teams played only once, in their gym, and the Jazz lost 104-99. So, I guess this is payback time right?

In that game Al Jefferson went 6/17 and took 8 more shots than anyone else and was a major reason why our offense didn't overpower Indiana. We were not efficient enough. Roy Hibbert can do that to ya. Paul Millsap had an 18/10/4 game against David West. David West is a guy who gets his lunch eaten by Sap regularly. Everyone seems to be on West's jock. I'm not. He's have a Sap like year this season, but he's altogether someone I really fail to respect. I guess that's partly because he played with Chris Paul back when we hated him. I guess I'm a full-time hater. 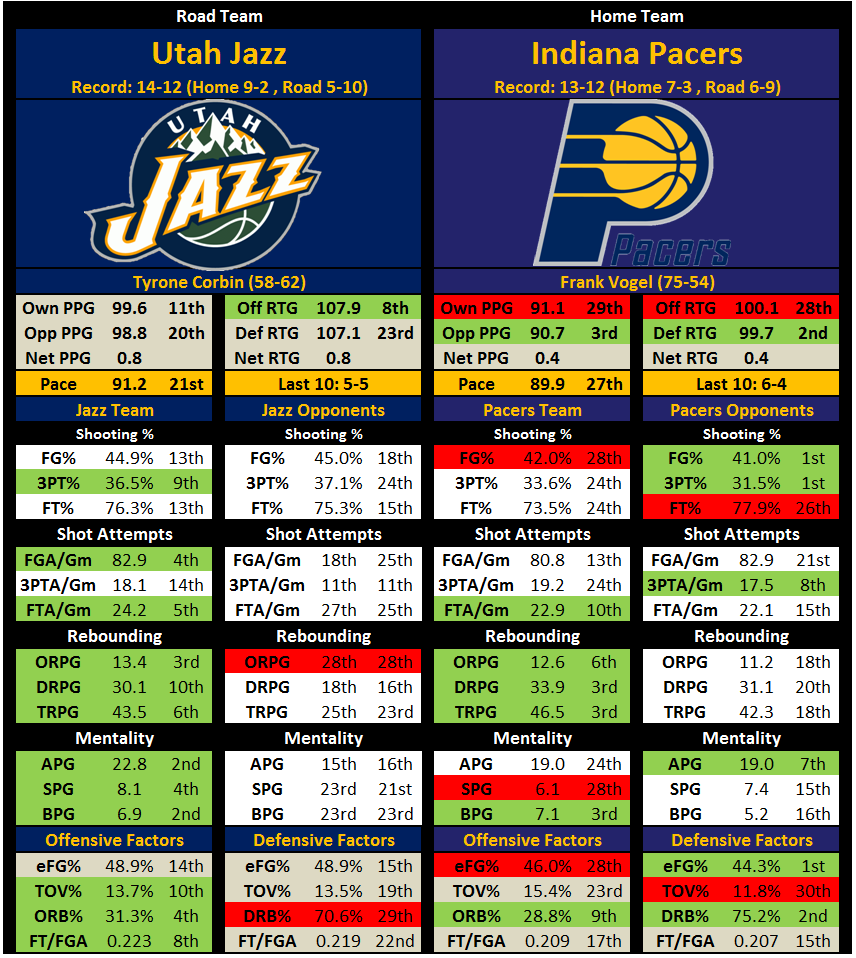 Tell me if you heard this before: we are a pretty good team on a lot of measures, but we fail to take care of the defensive glass. Other teams have some give and take there. Indy is one of those rare teams that would pose a size problem for us, and they are 2nd best in the league in DRB%. We've made up some points here or there with offensive rebounds. Tonight getting them could be very hard. You know, unless our wings and guards pluck some of them.

This is clearly in the Jazz' advantage. Granger is an All-Star, and Bell is almost out of the league. So talent-wise there's no comparison here. Of course, the Pacers have plenty of quality wing depth with Paul George, Gerald Green, and Sam Young all on the roster.

We played last night and are on a crazy road trip. Indy played last night too (@ Milwaukee Bucks), and both of these teams are in the middle of the crazy pre-Christmas games schedule. I wouldn't give anyone a fatigue benefit.

The Precious. Really. It's his 'home club' he's shooting 54.5 fg%, 50.0 3pt%, but only 75.0 ft%. He hasn't really killed it outside of offense, but he'll have his chance tonight against Paul George -- a dude who was drafted right by him. (One spot behind, actually.) Hayward has a ton of family coming to this game, and that's a lot of extra pressure. He thrives under pressure though. So I'm not really worried. He also seems to get up for key match ups. George, Green, and George Hill will all give him a lot of different looks. It's going to be fun tonight.

Especially if Hayward continues to shoot at such a high level.

The Pacers aren't a great three point shooting club. And we made it a big deal to become one. We all know rebounds and defense matter; but against such a slow team that dominates the pace, the long ball will make or break us tonight. No team is better than Indiana at defending the three this season, opponents only shoot 31.5% against them. And we're 9th best in the league at making them, at 36.5%. We need to space the floor, and open things up inside for our bigs with MAKING threes. Indy is long and everyone rotates well. Tonight the Jazz are going to have to trick them into overplaying in order to maintain our outside attack.

I hope we can do it.

Tom at Indy Cornrows and I had this little discussion about Roy Hibbert. It's no secret that I'm a huge Parks and Rec fan, and I was a huge Hibbert fan as well. He's having a very strange season though. 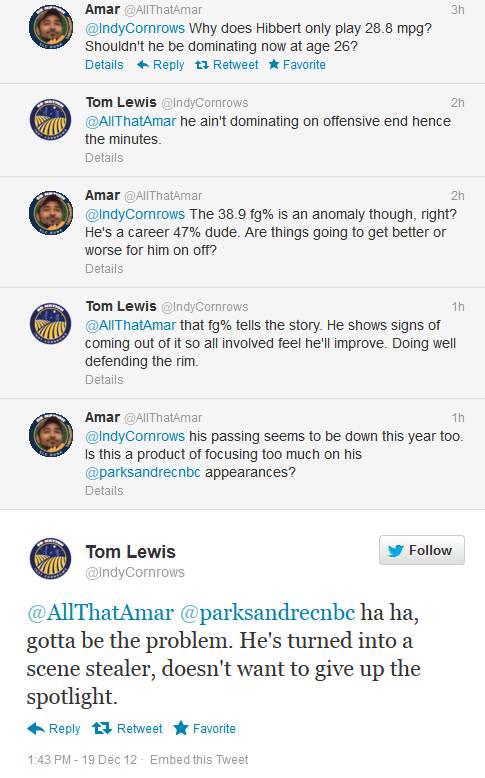 So there it is.

I remember back in the early 2000s when Jamaal Tinsley joined the Pacers out of his streetball days. He played in Indy for seven seasons, and as a rookie he averaged 9.4 ppg and 8.1 apg. He was never a great shooter, but I remember last year he missed the game in Indy. Was it some off-the-court thing? Will he play tonight? I really don't know. I hope so. He continues to be an asset for us off our bench. (David Locke is saying Earl Watson is going to be the guy who is going to play tonight) Earl also played for the Pacers, but he wasn't such a long time starter.

Jazz win, why? Because we're apparently road warriors now, and Gordon is playing at home.