The Do You Believe Edition - The Downbeat #918

I want to believe in the Jazz someone help me please.

Share All sharing options for: The Do You Believe Edition - The Downbeat #918

Jazz freaking lost last night. It was a bad bad bad bad bad game. I can't really think of anything good to say about it except that at one point the Jazz had the lead but it was very early and for a very short period of time. I'm not use to writing after a loss since it seem like most Wednesdays we win our games.

The Jazz are 5-2 on Wednesdays including last nights horrible loss. Their other loss was that game against Boston and that loss wasn't bad. It was almost a moral victory.

Last night was NOT even close to a moral victory it was one of those losses that I don't think Jazz fans will be forgetting anytime soon but I sure hope the players forget it soon or better yet have already forgotten it! I started to feel bad for Jazz fans that had to watch that game live and Jody sent this tweet:

This is what my son thought of the game: 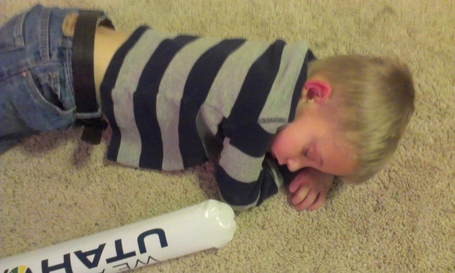 All teams have bad games. It is a long long long season and that was a bad bad bad game. Even the best of teams get blown out however Steve Luhm states how I feel:

I don't like games where there is absolutely no effort. One of the ugliest popcorn machine graphs you'll encounter:

The last 41 seconds of the 1st quarter with the lineup of Watson, Hayward, Carroll, Favors and Kanter was a +2.

The same lineup was a +1 at the end of the third. When Burks replaced Hayward they went +4 to close out the 3rd quarter. That lineup played the first five minutes of the 4th were they were 0.

Evans replaced Carroll so we had a lineup of Watson, Burks, Evans, Kanter and Favors they closed the game going a +5.

Yes I know they were playing against Indiana's bench but WHO CARES. We need something positive.

Yes those losses were frustrating any big loss is. But we knew that team was great, we knew what they were really about we knew how they won, we knew the coach's plan.

I think that's whats so frustrating with our current team. There is no identity. There is no clear plan of how we win ball games.

Ty did an interview with Zach Lowe

About Burks: (Ty brought him up not Lowe so Ty DOES know that he exists!)

And throw Alec Burks in there, too. We can’t even find time for him, because we’re trying to find guys minutes so they can get in a rhythm. It’s matchups some nights, and it’s how we’re playing on some nights. It’s another area where want to grow to where we force our will on teams, and not make adjustments to what other teams [are] doing all the time. And Alec Burks deserves more time.

You know the Jazz bloggers are harping on that every day, right? Fans love to see what they have in young players.

[Laughs]. Oh, yeah, they are. And he’s one young player who can play. He’s worked his tail off, and I’ve told him, "Just hang in there."

Another tidbit I found interesting:

So Al can guard the bigger centers, you mean?

Yeah. Because it’s not just about size. It’s about experience playing a guy, and knowing how to put your body on a guy. But at times, we’d like to be able to use Paul and Derrick, to grow into a quicker unit, to give us some more speed at times. We’ll look to grow into that as we go forward.

Interesting. I always imagined the reason for playing Favors and Jefferson was the idea that Favors could cover for Al a bit on defense, because Al’s not a great pick-and-roll defender. But maybe I’m misreading that.

Well, I think Al’s gotten better. But we look at it not just defensively, but from what does the other team’s center present on offense? If he’s a big, banging five that’s down low the whole time, we need a bigger body on him. And Derrick is capable, at times, of playing bigger guys. He’s getting better at using his quickness. He may not have the size to really pin a guy, but he has the quickness to get around him.

So the part i bolded is what I found interesting. We started out the year playing fast and that seemed to die. When we play well we are more of a transition team than a half court team. Is that what Ty wants, if so, how does Al fit in?

So the last three months I have been heavily involved ( I was the pianist) with my kids school production of the musical "Yes, Virginia". Macy's wrote the musical for elementary aged children. Its obviously based on the sweet letter from Virginia O'Hanlon to the editor of the New York Sun in 1897 asking if there was a Santa Claus.

Its a very touching musical with beautiful music. It has a important message.

Times are dark for New Yorkers when the musical begins. Its Christmas time, they are going through the motions of Christmas but there is little cheer or belief in what they are doing. Virginia knows there is more to Christmas than what she is feeling hence prompting her to write her letter. Through the help of her best friend Ollie and a character named Scraggly Santa Virginia believes in Santa. Mr. Church (the editor) changes his attitude, thanks to Scraggly Santa, from the man who only printed the cold hard facts to a believer.

OK I'll stop talking about it and relate it to the Jazz.

I very much feel like Virginia. I want to write a letter and ask if the Jazz are real. I want to know that they are growing and improving. I want to believe! The last three seasons have been some of the hardest for Jazz fans. We like the New Yorkers are hardened. We are going through the motions, we are watching the games, we are tweeting, we are blogging. But where is our belief? Are the Jazz giving us something to believe in?