Statistical Relation Between Height and Salary: What & Why

We've all heard the saying: "You can't teach height". The NBA is evolving, and height seems to be a "skill" teams are willing to pay big bucks for. Here, I take a statistical approach to addressing the cause of this trend and how significant it really is.

Share All sharing options for: Statistical Relation Between Height and Salary: What & Why

Brook Lopez: 4 years, $60.83 million. Roy Hibbert: 4 years, $58.37 million. For the past decade, it seems like the NBA has been littered with teams overpaying players; big men in particular. It’s happened so many times that the NBA fan base has just accepted it: big men are going to demand more money, period. And for the Utah Jazz fan base in particular, it makes us wonder about how much money our 4 big men will demand.

Its common sense: the more skillful a player is, the more they get paid. Skills such as scoring ability, defensive presence, and court vision simply sell. That is why players such as LeBron, Dwight, and D-Will get paid what they do- they have a proficient skill set that demand a max contract. This begs the question, what do players like Brook Lopez & Roy Hibbert have that are so unique? The answer is not a surprising one: height. You see, the NBA is going through puberty. A league once dominated by big men like Robinson, Ewing and Olajuwon is now shifting to a more athletic star line of LeBron, Westbrook, and D-Rose’s. This athletic change is allowing for scoring point guards to flourish and undersized big men to thrive. As a result, bigger slower players are unable to keep up with the changing athletic landscape of the NBA--making those who did make it to the NBA ever so more valuable. 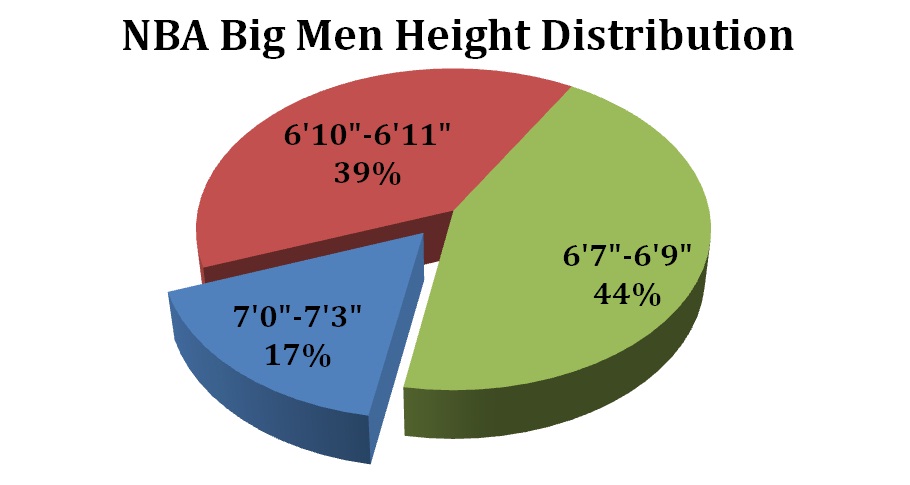 To put some numbers behind this theory, I compiled a spreadsheet of every player in the NBA (as of 2010-2011) along with their salary, player efficiency, minutes played, etc. Using this data, I wanted to see if height was a good indicator of salary; i.e. is there a significant correlation that the taller you are, the more you will be paid? If there is a trend, is it linear or exponential? I plotted every NBA player’s salary according to their height, and this is what I found: 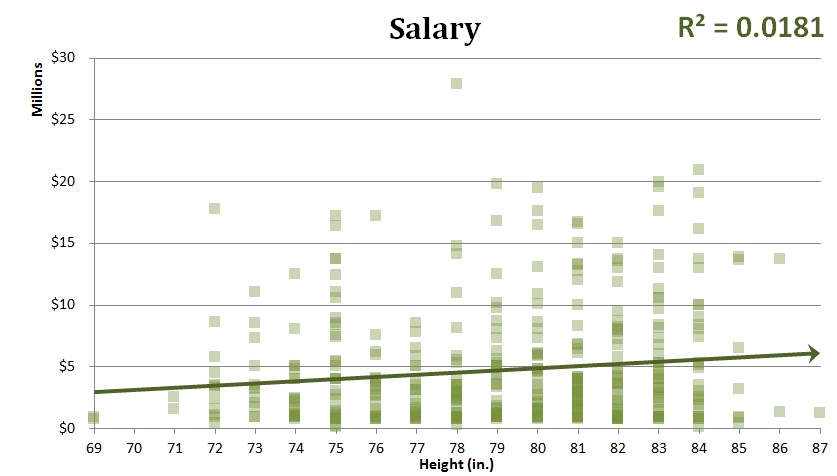 The key value to look at when analyzing scatter plots is the R2 value, or the squared correlation coefficient. For a sample size of 400 (the number of players in the NBA), the R2 threshold for significant correlation is 0.0096. As you can see in the salary plot above, the R2 value is 0.0181, which is about 2 times greater than 0.0096, therefore there is a significant correlation between height and salary. This graph alone demonstrates that height is a good determining factor for how much a player is paid.

Now to ensure this trend is linear (as I projected in the salary plot above), I plotted the residual values, which are the difference between the actual values & projected values for each player: 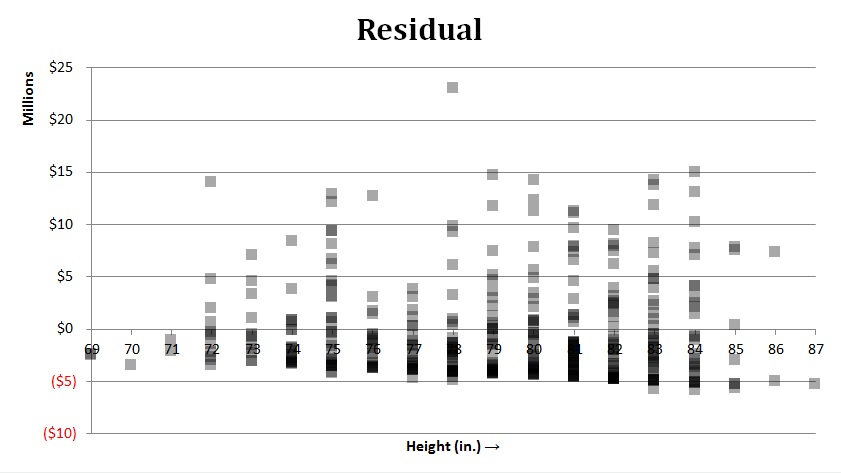 Because the residual values are completely random and scattered, we can be ensured that a linear trend line was appropriate over an exponential one. Therefore salary increases linearly with height.

Now that it has established salary increases with height, it’s time to determine whether or not the increase is due solely to height, or if the taller players are in fact better than shorter players skill wise(which in turn means more money). To test this, I used two stats that I believe are good determining factors to a player’s skill: Player Efficiency Rating and Total Win Share. The Player Efficiency Rating (PER) was statistic developed by Memphis Grizzlies executive (and ex-ESPN writer) John Hollinger, and is stat that "sums up all a player's positive accomplishments, subtracts the negative accomplishments, and returns a per-minute rating of a player's performance." PER is one of the most widely accepted stats used today in deciding a player’s overall ability. Total Win Share (WS) is Basketball-Reference’s adapted statistic from Billy James’s system that estimates "a player's contribution in terms of wins". It’s a statistic that many believe to accurately show a player’s effect on a team since it’s possible to have a negative WS value (meaning the player takes away from a team’s success.) 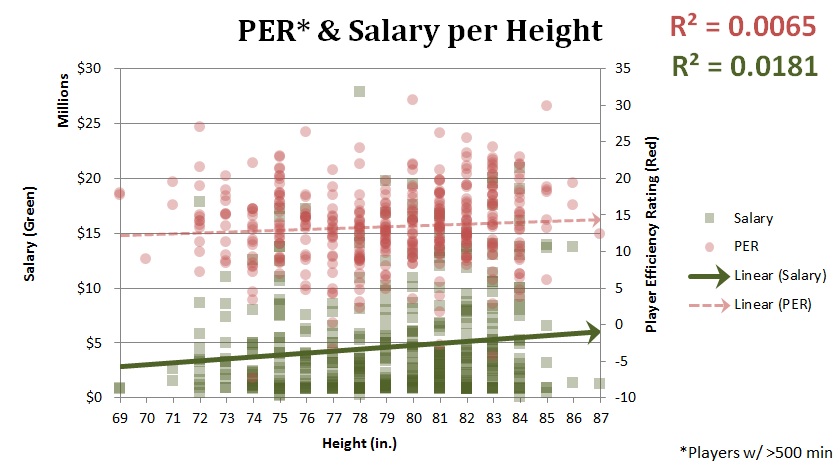 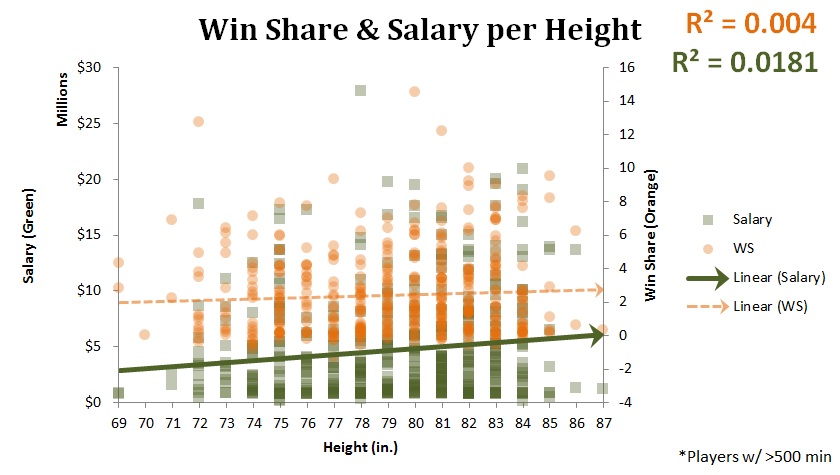 If you recall, the minimum squared correlation coefficient (R2) necessary to decide significant correlation is 0.0096; and both Player Efficiency Rating and Win Share do not display significant correlation (R2 values of 0.0065 and 0.004 respectively). What this tells us is that PER & WS both do not discriminate due to height, but salary does. Salary is increasing linearly while PER & WS show no trends among heights, so we can attribute that increasing salary not to PER or WS but instead to the increasing height. The height is actually inflating the total valuation of players. This is displayed when I plot the amount of money paid per PER point (which gives me a statistic on how much "bang for their buck" NBA teams are getting per player’s efficiency point, for each height). 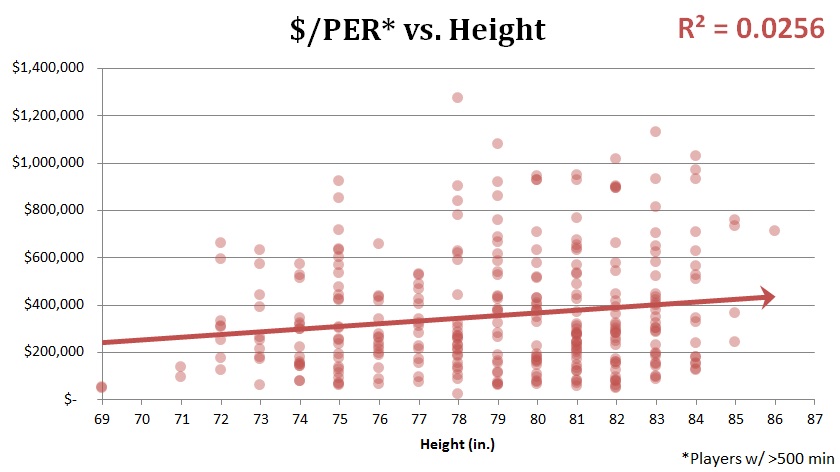 As you can see, there is a significant correlation (R2 value of .0256 > .0096) for the value of each Player Efficiency Rating point. Teams have to pay more for player efficiency just because the player is taller.

The NBA is becoming more athletic, and this causes a problem for the 4’s and 5’s of the league. As a result, this is forcing big men to adjust by either: 1) become really specialized in one skill and not have to develop ball handling (an option favorable for taller bigs) or 2) go with the flow of the NBA and develop outside shooting/ball handling (favorable for shorter bigs). As you saw from the height distribution chart, the latter option is one most big men of the league are headed. Naturally, ala Supply/Demand, this makes the extra height offered by the specialized bigs even more valuable and desired by teams. After all, like GMs and Scouts always say, "you can’t teach height".

Questions, Comments, Confessions? I'm on Twitter @AlecLam14. How U?