Read this if you're still alive.

Share All sharing options for: The "I'm Alive To Write This So Y'all Should Be Alive To Read This" Edition - The Downbeat - #919

The day after Zach Lowe of Grantland published his interview with Tyrone Corbin, David Locke did a podcast with him talking about the piece and some other NBA trends as well. Asked what impressions he was left with after having interviewed Tyrone, Lowe said: 1) The patience with which Tyrone approaches his rotation decisions and his "we'll see what we have" approach; 2) That he doesn't want to touch the possibility of Millsap/Jefferson trades. In response, Locke said that where Tyrone can achieve greatness in this league is: 1) That he's not trying to just "survive" on a daily basis; 2) His ability to keep his players engaged despite trade talk and uncertainty. Locke and Lowe also talk about whether Gordon Hayward is better served as a primary option in the second unit or whether he's actually more of a complementary player in the starting unit. Lowe also offers his best guess on whether Millsap or Al is more likely to be traded, so give it a listen.

A few weeks ago, I posted one of NOC's "Every Fan of the NBA" videos. Now, we have this "Every Fan's Girlfriend," which has some pretty good moments:

"The Solution" was once regarded as the best home court advantage in the NBA and feared by opponents. The number of Jazz game tickets being sold this season may not necessarily be down, but the number of fans with tickets that choose not to attend games has certainly declined as is evidenced by the wide and extremely visible swaths of green seats cutting across the arena during every game. What would you attribute this to? If you are a Jazz fan that has regularly attended games in the past, but has chosen not to this season, what are your reasons? 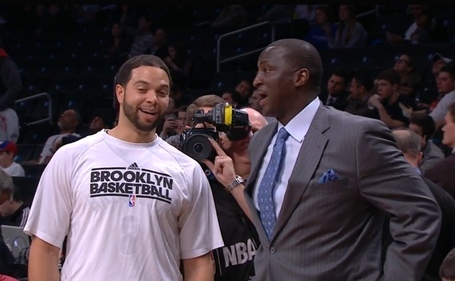 A few days ago, some fans were tweeting about players they wish they could combine or could have combined. (Sorry, I can't remember who was tweeting about this. If you started the conversation and want credit, leave a comment. If you were involved in the coversation and want a mention, leave a comment too.) Suggestions that I saw included Jamaal/Earl and Brewer/Korver. Which two Jazz players, or which attributes of two Jazz players, that played the same position (so don't say Stockton and Malone) and were on the team at the same time would you combine or have combined to take the Jazz over the top?