The Offbeat: Kanter's Rebounding Drop... Is He Boxing Out Badly?

Kanter's rebounding numbers have dropped considerably compared to last year. Might it be that he's boxing out poorly?

Share All sharing options for: The Offbeat: Kanter's Rebounding Drop... Is He Boxing Out Badly?

Last year, Kanter's rebounding talent was clear. He was hailed as a rebounding savant, and many said it was his NBA skill; that is to say, the one talent that would keep him in the league should the rest not pan out. This year, though, he's been disappointing. What's going on?

Looking at the standard per game stats, you wouldn't notice anything wrong at all: Kanter has exactly the same number of rebounds per game as he did last year: 4.2. However, when the number of minutes played, plus the number of shots taken is considered, Kanter's rebounding problem is more clear: he's grabbing only 17.3% of the available defensive rebounds this year, compared to 22.7% last year. That's quite a large slide, moving him from Utah's 2nd best rebounding big man to their last. Furthermore, it's not just that Kanter is getting fewer rebounds, but his team is getting fewer of them with him on the floor. David Locke posted this picture of the rebounding numbers for the team, from the NBA's media-and-team-only stat resource: 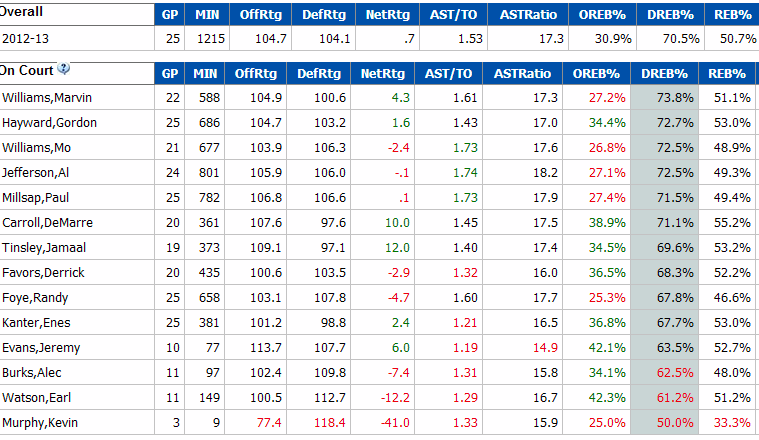 Furthermore, Kanter's rebounding drop is contributing to a much larger problem: the Jazz' defensive rebounding as a team. Last year, the team ranked 11th in defensive rebounding, which makes sense given the Jazz talented big-man rebounders. This year, though, they're ranked 27th. Below the Jazz are only the Kings, Suns, and Bobcats, otherwise known as some of the worst teams in the league. This situation: it's non-ideal. Kanter's a part of it.

Strangely, Al Jefferson's defensive rebounding is great this year: he ranks 14th in the league, on pace for a career high, and as we saw above, the team does quite well when he's in the game. More basically, he gets 27.5% of the defensive rebound opportunities, Kanter, remember, only gathers 17.3% of them. What's going on? Let's look at the video.

In doing research for this article, I watched a majority of both Jefferson's and Kanter's defensive rebounds. I also looked at their failed rebounding efforts, i.e., when they allowed offensive rebounds when they were in the game. Doing so allowed me to evaluate a few possible explanations of what's going on:

1. Kanter could be helping more on defense than Jefferson, thus being out of position to rebound.

This is the easy SLCDunk-style explanation: Basically, Jefferson, because he's a poor help defender, stays in better position to get rebounds. More rebounds go to the weak side rather than bouncing back to the strong side, thus by not helping, he's in better position to get more rebounds. Here's an example of that going well: on this play, Kobe is driving in, however, Al chooses not to help too much, and is rewarded by good rebounding positioning once Kobe misses the layup.

On the other hand, sometimes this strategy doesn't go so well, and the opponent makes the layup:

Which is, of course, not a positive result for the Utah Jazz. Kanter, on the other hand, is a somewhat better help defender, and so may take himself out of position:

While Kanter was initially out of position on the rebound, his subsequent complete lack of recovery wasn't a good play. However, I found this actually happened fairly rarely: I had to go all the way back to the game against the Sixers in order to find a clear-cut example of Kanter missing out on a defensive rebound because of helping. This probably does cause Kanter to get a few fewer rebounds, but certainly not enough to explain the disparity.

2. Because Kanter lost so much weight this offseason, he became easier to push around.

I could see this being true. For example, here's Dwight Howard pushing Enes in order to get the offensive rebound:

But Dwight is one of the strongest centers in the league, and for the most part, Kanter is certainly larger than the vast majority of backup centers. This probably comes into play in 5-10 games a season, but for 80-90% of the games, Kanter is playing an opponent who is less strong than he is. Again, this probably affects a few rebounds per year, but nothing more.

3. Kanter boxes out his man, however, this sometimes put him in a less optimal position to get the rebound.

This theory sounds counter-intuitive at first: anyone with any basketball experience whatsoever has been told that boxing out is the key to getting rebounds, especially rebounding as a team. However, in the NBA, I don't know if that's the best advice.

Watching the video, it's clear: Kanter boxes out a majority of the time, but Jefferson doesn't. Instead, as Alec Lam explained last year, Al uses his agility and jumping ability to get rebounds. Kanter does the early work of boxing out, but doesn't get to the rebound, because boxing out sometimes takes him out of optimal position. This is a particularly egregious example, but it's not uncommon:

Kanter is boxing out his man, it's just that his man didn't have a particularly good hope of getting the rebound, while Lamar Odom is literally just standing in excellent rebounding position with no one to compete with. Turiaf is certainly out of the play, but so is Kanter: he has no realistic hope of getting this rebound around the free-throw line. As a result, the Clippers get an easy bucket in a game that Jazz lost by very small margins.

Check out this play against the Celtics:

Once again, Kanter is boxing out. Indeed, it's good that he is, because the rebound comes out to his position. But unfortunately, because of the fight while boxing out, he isn't ready to jump or get his hands up for the rebound when it comes, instead, Chris Wilcox is easily able to grab it. This sort of thing happens fairly often, especially against more scrappy second unit guys who will engage for any ball (even on the Celtics). The boxing out itself prevents the player from being ready for the rebound.

That's not to say boxing out is a bad idea. Here's a clip from one of the best rebounders in the NBA, Kevin Love:

As you can see, he boxes out Bosh, but still gets into position to be able to jump for the long rebound. He's able to then tip it to himself, getting the board. This is a good example for Kanter, as Kanter and Love have somewhat similar athletic profiles. Instead of engaging in the box out fight, it would be better to quickly box out, but be sure to be ready for when the rebound comes by being able to jump vertically and use your hands to reach the ball at it's apex.

The good news is that these are things that the Jazz coaching staff can work on with Kanter to make a positive impact on his game. He's young, so it is reasonable to expect that he picks up these nuances with time and the correct instruction. If the Jazz continue to struggle on the defensive glass, spending some valuable practice time with Kanter on these issues would be a possible remedy.