I felt like the Jazz were going to win a tough game tonight, and they did. It was unnecessarily tough because J.J. Redick hit a crazy shot with seconds left to make it a 1 points game. Thankfully by that time the Orlando Magic were in "we gotta foul now" mode, and we managed to make them when they *kinda* counted. That's not necessary true, but true enough tonight (when we shot 72 ft%, and left 7 points at the line in a 4 point win). The game didn't start out the way it ended though.

As usual, the Jazz were blasted in the first quarter, losing 30-18 behind a healthy onslaught of Magic guards finally hitting their shots. Arron Afflalo (20 points, 9/19 shooting) and Jameer Nelson (14 points, 4/7 from downtown) were getting it done against our starting guards of Randy Foye and Jamaal Tinsley. Orlando was also helped by their bigs Gustavo Ayon (not a regular starter -- but finished with 9 and 12) and Nikola Vucevic (16 and 16). They were scrappers, getting offensive rebounds (7 between the two) and making their shots at the rim. They were also making life difficult on the other end for our dudes.

The second quarter was the opposite of the first as we won that one 28 to 17. I'm not too "high road" to move beyond saying: "It was the C4, stupid." It was. They didn't have fantastic lines, but on the floor together, paired with a pass first point guard -- it changed the way the game went.

Surprisingly, Alec Burks got a lot of his burn at the small forward spot (Marvin Williams played only 17 minutes, and went 1/6 with zeros after that, and DeMarre Carroll played 5 minutes, with zeroes across the board). It's also funny that when Burks is in the game the other team doesn't automatically run their offense through the guy he's defending like they do when Foye is on the floor.

Foye, the dude I was focusing on tonight. Why? 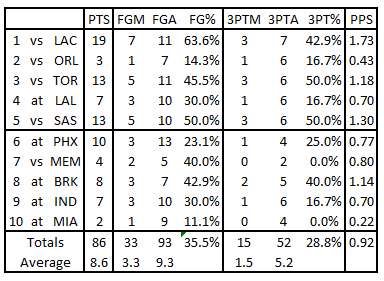 This is why. This is his shooting from the last 10 games before tonight.

Tonight he had a much better game, in 28 minutes he finished with 10 points (3/8 shooting, 2/4 from downtown). He also did MORE than just shoot. He drove, and was successful. He had 3 rebounds, one of which was a 50/50 ball. And he also had 2 steals and 1 assist. Good game for Foye on a night where he was sill predated highly upon by the other team's game plan.

Derrick Favors and Enes Kanter aren't scoring well, but they make their free throws and get rebounds -- both played less than 20 minutes in this game. Gordon Hayward was effective on both sides of the court and had a stellar 17 point game where he added 1 assist, steal, and block -- and great defense (comparatively) on Arron Afflalo. He shot 7/10, and made all his free throws. The +/- for our C4 goes as follows: Favors (-2), Hayward (+2), Kanter (+4), and Burks (+17 - best on the team).

Collectively everyone worked together well in the absence of Mo Williams, who was our head coach down the stretch.

Good win. Interesting road trip. We finish 2-2; however, some people would suggest that we didn't even show up in 2 of the games. I don't know how much I believe that though.

After all -- we lost to two of the best teams in the East. Most Western conference playoff hopefuls would do the same as well.

Sorry for how late this is, I was waiting for Popcorn Machine's gameflow to drop, but it has not yet.