The Offbeat: Looking at the Pre-Christmas Road Trip

The Jazz have gone on a pre-Christmas road trip of at least 4 games every year since 1984, now going on an amazing 29 years. Is it a good idea, and how have the Jazz performed on these trips?

Share All sharing options for: The Offbeat: Looking at the Pre-Christmas Road Trip

Last month, Diana and I attended a Jazz season ticket holder event, in which 100 lucky ticket-holders got to attend a meeting with one of the coaching staff. In our case, we got to talk with Richard Smith, the Jazz Director of Basketball Operations. Smith shared a number of anecdotes about the team, what the Layden and Sloan years where like, as well as some parts of the system that has served the Jazz well for so long.

"Smitty", as he is known within the organization, explained the reasoning behind the Christmas road trip: former coach Frank Layden felt that, during the week before Christmas, players were especially likely to lose focus. In particular, the demands of family, shopping, charity programs, and more all lead to tired and disjointed play on the floor. As a result, the team tried to remove those distractions by sending them on the road during those times, saving the home games for later, less hectic times of year.

I'm honest, I was skeptical: the explanation seemed somewhat like a stretch to me, and I wanted to do a quick look at whether or not the Jazz had benefited from the trip. To do so, I looked at the 27 seasons in which the Jazz had gone on a pre-Christmas road trip and compiled the team's record on that trip each year. 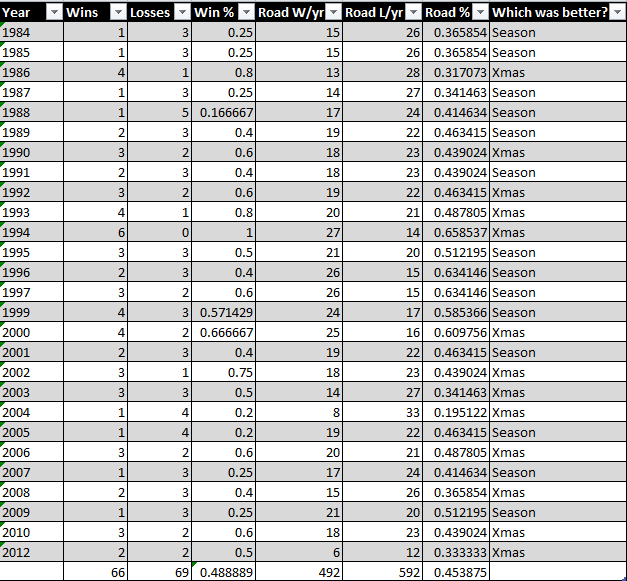 Overall, the pre-Christmas road trip's record (66-69) has been below .500 - significantly below Utah's overall record for the period. However, it is slightly above the team's overall road record (492-592) from 1984-2012, though only by a few percentage points. Doing a quick statistical significance test (Hey! My math major becomes valuable for just the 3rd time!), I find that those aren't significantly different at a 95% confidence level, in short, we don't know if that difference is due to random chance or if the team actually does play better on that road trip.

When you compared the trip and the road season performance on a yearly basis, the Jazz performed better on the road trip than overall 13 times out of 27. Again, that's very nearly a 50/50 split.

Basically, it doesn't really matter: going on a big road trip pre-Christmas doesn't seem to hurt the Jazz, but it doesn't seem to help them any more than the spread determined by random chance. This is generally how I feel about these sort of explanations: in general, these abstract factors are usually overwhelmed by tangible inputs such as player talent.