Hey, remember when the Clippers were a universal laughing stock? Yeah, 23-6 makes it hard to laugh at them now...

The Clippers played last night and finish up a back to back set with tonight's game. Then they play the Jazz in their gym as the third game in four nights. Apparently they've also played 7 games in like 10 days or something. (I just checked, it's not true, but they've played a lot recently) We're coming off a no-show game at home to the Golden State Warriors. This will be the second time we face the Clippers this month, and have one more game against them on the 30th. Fun stuff.

Nope. Still taking a holiday from this. The stuff I've been experimenting with though will look awesome when I get back home. (Remember, I'm doing these posts from a different country right now)

On paper what the Clippers are playing without (two HOFers) is huge, but they don't rely on any of those guys to be their second best player on any given night. Mo Williams has his ball in the hands the most and is our engine sparkplug. And really he has been the barometer for our team this season even more than Al Jefferson. (Al still gets good numbers in losses) I'd give the Jazz a bigger disadvantage here, even if there is no real advantage for either team. No Billups?? Okay, have some Chris Paul and Bledsoe. No Grant Hill? Okay, have Butler and Matt Barnes.

I really don't know about tonight, I'm most likely not going to be able to watch it either. So, uh, people going to the game -- have fun. Our fans deserve a win. That much I know.

Paul Millsap -- and I'm getting frustrated expecting him to snap to it and play like he's capable of playing. Last season he was a near-All Star on a playoff team. This season he's a starter on a bad team. That's a huge step down. This season his numbers are similar to his numbers in his third year in the league, save for more apg now, but at the cost of a -6.2 fg% drop. He's the second leading scorer on our team with 14.7 ppg, which would fourth highest on the Clippers (and the Golden State Warriors too). I think part of the problem has to be him, but another problem has to be what we're using him for with the team. At some stage part of our problems trickle back towards what our gameplan is. From the looks of things, our gameplan is to have everyone have a crappy year so that if we wanted to re-sign them as free agents then their asking prices would all be lower than it should be.

Millsap has trouble with guys who are BOTH bigger than him, and more athletic than him. Bigger guys he's too quick for. More athletic guys he's too big for. Against both he's pretty much toast -- as David Lee has shown. Blake Griffin is like the omega point of making life hard on Sap. He's also FASTER than Sap. The only thing Paul has going for him is more heart -- but sometimes heart isn't enough.

Tonight I hope it is though, as Millsap's talent and capabilities will be sorely needed against such a tough opponent. We can't have one of our best players continue to play less than he should be playing all season long -- and expect to win a lot of games.

Honestly? Tonight's is going to be all about the refs respect. Which is bigger, the respect for the Western Conference leading team filled with stars on a 15 game win streak -- or of that for the heritage of many many seasons of solid, nay, dominant home play by the Jazz. If it's OUR game in OUR gym then we have a chance. If it's just another version of "Hot marketable team vs. no-names" then the refs will have already decided the outcome already.

Of course, it would help if our team didn't PLAY like a collection of replacement level no-names on expiring deals. But Christmas only comes once a year, and this year it has already passed.

I didn't get anything from the Clippers guys and gals, but my good friend Justin (@cazjuice) offered up this 3rd party comment about the Clippers. 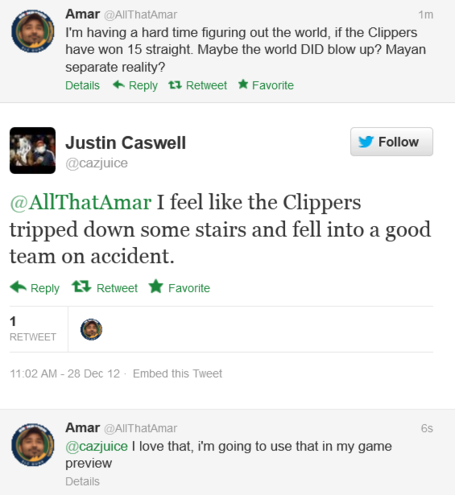 Justin lives in the 'Zoo and is a great oldschool BBALL fan who roots for the Detroit Pistons. He follows so many on people that people think he's a fan of another team though; a testament to his neutrality and open mindedness. But more on point -- who knew that a team that was stockpiling PGs (Chris Paul, Chauncey Billups, Mo Williams, Randy Foye, and Eric Bledsoe) and got two super athletic, super young bigs in Blake Griffin and DeAndre Jordan were just a handful of veteran wings away from contention? (Grant Hill, Caron Butler, Lamar Odom, Matt Barnes . . . oh and this Jamal Crawford dude) (Note: they let Foye go in free agency, and Mo was moved in a deal that brought back Odom)

Their coach is Vinny Del Negro after all. How is this working? Oh, they brought in the right vets and are playing them in conjunction with their young talent. I see. And we pounced on the vets the Clippers didn't want. When has that ever been a successful strategy?

Some of those KIA commercials are fun.

Jazz win, why? Because our last home game (our third home loss this season) should have been enough of a kick in the pants to motivate such a stalwart group of veteran leaders. Seriously, what's the point of starting all these old guys if they don't have the intrinsic motivation to defend their manhood after a bad loss at home? In front of their families?