Chris Paul is saying nice things about Utah now to later use us as free agency leverage, duh.

The Clippers weren't a bad team last season, they were second in their division, won 61% of their games an fought a hard 7 game first round series and got to the second round of the playoffs. Not bad at all! But they still went out and made a ton of changes in the off-season. No, I don't just mean waiving Ryan Gomes. The Clippers added Jamal Crawford, Willie Green, Lamar Odom, Matt Barnes, Grant Hill, Ronny Turiaf, and Ryan Hollins while re-signing Chauncey Billups.They essentially just lost Nick Young (to the Sixers), and Mo Williams and Randy Foye to us. When healthy, and with their head on straight, Billups, Crawford, Hill, Odom, and Barnes give great bench depth. They're adding that depth to Chris Paul, Blake Griffin, Caron Butler, and DeAndre Jordan. They're a really good team on paper, and the paper also tells us that they are getting the job done. (Check this out in the stats section)

All time the Jazz are 98-61 against the Clippers, with a whopping 61 to 18 advantage here in Utah. Last season these two teams played three times, with the Jazz winning the first one (the Matt Harpring presenile dementia game: "Tonight . . . is . . . Lob City."), then dropping the second at home in a close one where the Clippers got what they wanted down the stretch. The last game was less fun to watch.

Chris Paul isn't traditionally awesome in Utah, but since the departure of Deron Williams he has had a few good games here in a row. It's necessary to also point out that Blake Griffin has now become too quick for Al Jefferson, too big for Paul Millsap, and too athletic for Enes Kanter. And we're playing without Derrick Favors tonight. Former Knicks and Blazers and Hawks Jazz killer Jamal Crawford also makes their bench one of the best benches around. Historically we've had lots of problems with Crawford and Odom. So this game is going to be all about trying to minimize all the Jazz killers on the floor. 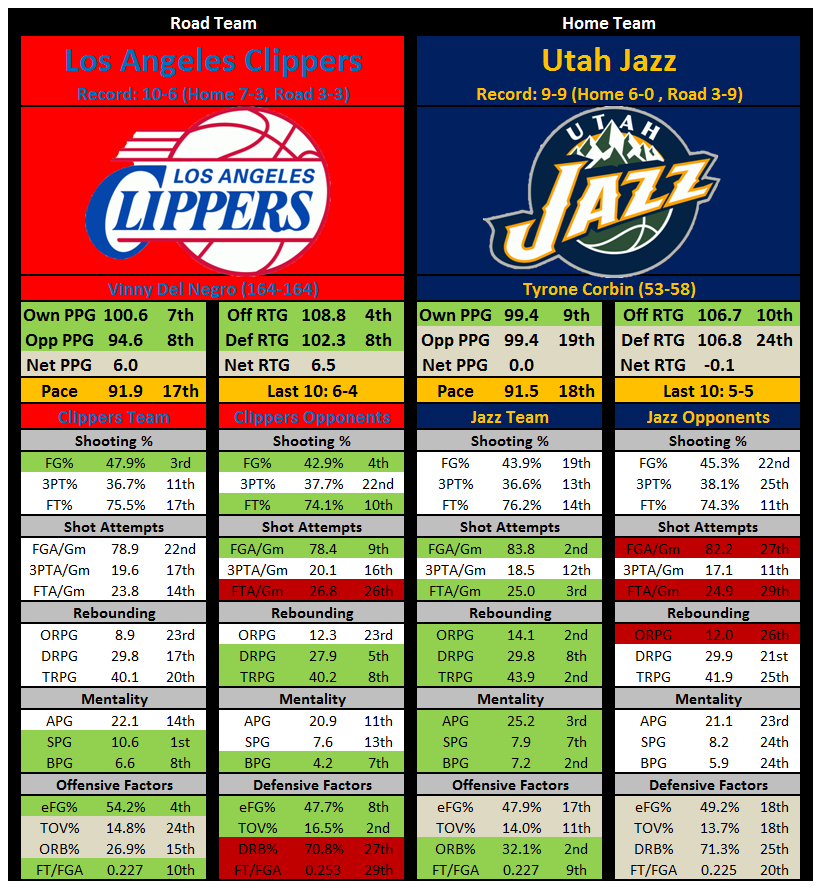 The Clippers are really a good team on paper. They are Top 10 in points per game (own), points per game (opponent), offensive rating, and defensive rating. They're doing it with the 17th fastest pace in the league, so they like to slow things down and grind it out with precision. They get good shots, and make them, as they are #3 in FG%, while their length helps to disrupt things in terms of causing steals (#1 in the league, #2 in defensive TOV%) and getting in an contesting shots (#8 in blocks, #4 in opponents fg%). Chris Paul helps them get really good shots, and they have a legit defensive anchor in the paint with Jordan.

They are 'vulnerable' when it comes to letting the other team get to the line (which works out in theory with our team as we get to the line the #3rd most in the NBA -- but watch this not work out in the game as, you know, star calls...), and with their inability to really protective their defensive glass. (#27) Utah is great at getting offensive rebounds (#2), so this should be our point of direct attack. If we get to the glass, get extra possessions, and get to the line we can hurt the Clippers precisely where they are vulnerable.

LAC has a great half court offense with all their pick and rolls, lobs, and spot up shooters -- so there's no point in trying to beat them at their game. They get a lot out of their role players, if we speed up the tempo perhaps their half court oriented role players will be marginalized? I don't know. I'm not a professional basketball dude. I'm just a fan.

The loss of Favors is huge because he provides the illusion of defensive capability. He leads the team in blocks (+12 over the next most prolific shot blocker on the team, despite playing fewer games), and is a threat to change so many others. The Clippers love penetration and getting guys 'lobs'. Defending the rim becomes so much harder without Favors. Marvin should not rush back, but he's precisely the type of guy who could help us tonight. The Clippers have the clear advantage here in terms of health.

This is a special game because it's the first regular season game for Mo Williams and Randy Foye against the club they spent the last two years playing for. They are two guys who would normally have been playing PG, but shortly after their arrival the Clippers brought in Chris Paul and Billups -- meaning more and more time off the ball. This would be a good time to show them what they are missing out on. It's personal.

Also Paul Millsap isn't Blake Griffin's biggest fan; while Odom and Barnes seem to hate our team. It'll be a fun game for sure. Lots of fouls, and not all of them will be called.

Randy Foye is super hot right now, and I hope he doesn't get caught up in the emotion of this game. He's the type of player who can neutralize (or eliminate by volume) Jamal Crawford. We previously did not have a guy like that before. While Crawford gets it done in one on one, Foye is a deadly spot up shooter. But Foye has recently shown more skills than that. He may want to put his full repertoire on display against his old club. I'd keep an eye on this.

I was going to put some analysis in this, but forget that.

I tried to contact some Clippers fans, but they were unreachable as they were already measuring up their Pacific Division banner right now.

Remember when Ron Harper called being with the Clippers like "being in Jail"? Ron Harper started his career off with the Cleveland Cavaliers. So he's saying being in Cleveland was better than being in LA, because that's how badly the Clippers used to suck. As much as I respect Ken Norman and Michael Cage -- I'll never really respect the Clippers. They are truly the NBA franchise built upon low income, high density, sand.

Jazz win, why? Because we're at home. And the Clippers aren't a perfect team.