The Offbeat: A Quick Look at 82games, or... Do The Jazz Play Their Best Players?

82games features some fairly telling statistics about the Jazz' rotations. How can they be improved?

Share All sharing options for: The Offbeat: A Quick Look at 82games, or... Do The Jazz Play Their Best Players?

82games.com is an amazing statistical resource for NBA fans. Why? Because they interpret the NBA's play-by-play data to produce aggregate data you can use to answer all sorts of questions - those involving efficiency, position, lineups, shot clock usage, production, and more.

Today, we're going to peek around 82games to learn something about the Jazz' rotation. 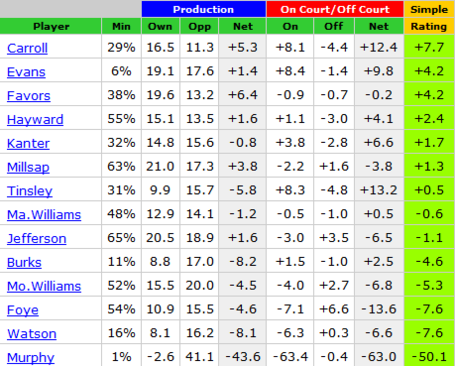 A quick glossary of what you see above:

Here's the problem with the above table: for the Utah Jazz, being good at basketball (as defined by Simple Rating) is negatively correlated with playing time. This is obviously not the goal: one of the main roles of a coach is to play his best players the most minutes. Unfortunately, that isn't happening for the Jazz.

Let's take a closer look. While playing time is negatively correlated with the Simple Rating, it's a very weak correlation (-0.07). So, at a more nuanced level, it's not that Ty is playing the worst players more, it's just that he has no preference whether or not the players are good or not. Moreover, there is a positive correlation (0.32) between playing time and the PER differential of the players, so it's possible that the coaching staff is simply looking at player success on an individual efficiency level. Unfortunately, that also means that the +/- and playing time correlation is pretty strongly negative (-0.51), and while the +/- data certainly has a lot of noise, it's also what happens to win basketball games (i.e., scoring more points than the other team). To ignore +/- totally is fairly dangerous.

So, by this analysis, what should the coaching staff do?

Ty has a difficult job, there's no question, and his position in the locker room as a player's coach is important for the future of the franchise. It keeps stability and promotes a certain culture that is understandably important to the Utah Jazz brand. Unfortunately, at this point, keeping the highest priority on keeping players happy has meant significant underperformance on the basketball court, which ultimately is what any team is judged by. While keeping players happy is important, a priority shift towards the players who perform well may be in order.