Why the Trade Deadline Might Not Save Us - The Downbeat #927

It was another loss to the Clippers last night in an entertaining game. Big Al had a very good game and a super 3rd quarter, especially for a road game. Millsap was unusually ineffective and missed 4 straight free throws, and everyone else was sort of average. Demarre Carroll got the start due to his defense, unfortunately, the 2011-12 version of Demarre's defense showed up and he allowed an average player in Caron Butler to score like he was James Harden. Here's where the loss leaves the Jazz after 32 games: 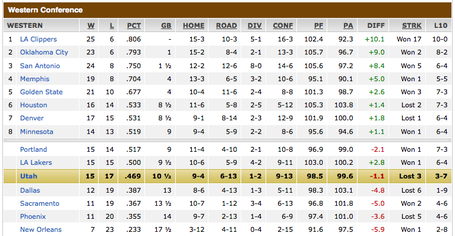 Even with the very difficult schedule, I don't think any of the Jazz players or brass figured they would be 11th in the conference and in last place in the Northwest Division this far into the season. I thought before the season started that the Northwest Division would be the best overall in the NBA, but I didn't expect the Blazers to start 15-14. So the Jazz being in last place has a lot to do with how good Portland and Minnesota have been.

It's really new territory for the Jazz, who haven't finished the season in last place in the Northwest Division since its inception in 2004-05. It's an odd feeling for everyone involved. I would still bet that the Jazz finish this season in 3rd or 4th place in the division, though.

Here is your weekly look at where we stand offensively and defensively as a team: 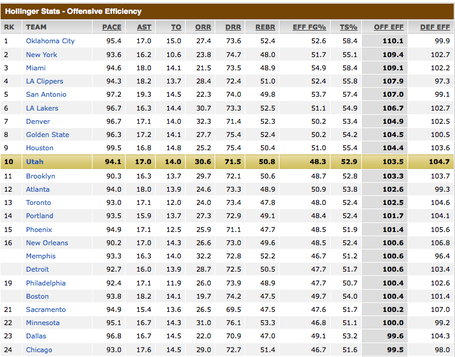 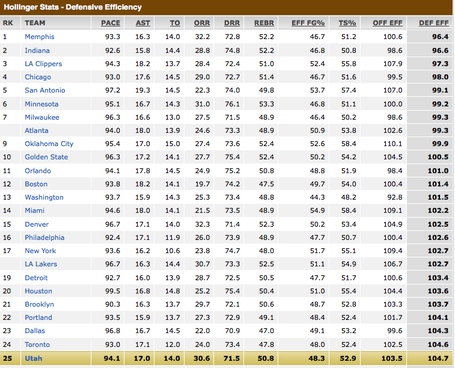 Both of these numbers should improve with the upcoming increase in home games.

In his high notes article, Spencer included a really interesting article from Sports Illustrated's Point Forward blog that I thought was worth mentioning. Point Forward writers Rob Mahoney and Ben Golliver each answered questions about trade rumors and the 4th question was about the Jazz's own Paul Millsap and Al Jefferson situation.

The interesting thing is that those two come up in any trade talk situation in national media, because really, in some ways, I think the Jazz are seen as the most likely big trade destination. Most national writers bring up Al Jefferson and Paul Millsap when talking about any big trade possibilities. We will just have to get used to it. It'll be here until the trade deadline passes into the night

I've talked about this often, but I figured I would share a little thought I've been having lately. It is so hard to trade Al Jefferson. If you trade his $15 million contract, you have to take back at least $10 million and probably closer to $15 million. That means you are probably taking back at least one bad contract. The only way I see the Jazz trading Al Jefferson, is if they can take back a very good player who is being paid more than $12 million or so. There aren't very many, if any, of those players available and teams aren't going to want to take on Jefferson's contract and save the Jazz money, when they can just pay Al Jefferson this summer.

Paul Millsap could probably be traded today, if the Jazz wanted to, because he has a very reasonable contract that happens to match up with so many other players in the league. And the Jazz could probably get some value back while avoiding bad contracts, but they would also be trading Paul Millsap, the fan favorite and longest tenured Jazzman. The one caveat would be if a contending team traded for Millsap or Jefferson to make a title push, but those types of teams don't have great assets they can spare in a trade, generally speaking.

What is interesting is that most media guys, and I think Jazz fans, assume the Jazz will trade one of them and re-sign the other this offseason. I think there is a really good chance the Jazz keep both past the trade deadline for the reasons I have listed. But I also think there is an increasingly bigger chance that the Jazz don't bring either back for next season.

GM Dennis Lindsey mentioned on 1280 The Zone about 2 weeks ago that they plan on paying "market or below market value" for their players moving forward. I think that is the absolute bottom line. The Jazz will value retaining Millsap and Jefferson at a good deal over retaining them just to have them, if that makes sense.

I don't know what the other options will be, but I don't see the Jazz resigning Jefferson for a similar deal to what he makes now and I also don't see the Jazz paying Millsap much more than they are paying him on his current contract, especially if they envision him as a third big down the line.

I guess I'm just preparing you to see both of them here all season. It's not definitely going to happen, but I think it's much more likely than many NBA fans think.

Andy wrote a great piece taking an in-depth look at 82games.com and a player's ability to help the team. I love 82games.com, because I believe that when all is said and done, your biggest factor in determining your worth, is how much you help or hurt your team when on the floor. If you listen to the Andy and Clark podcast, you already know that. Let's take a look at a few more stats from 82games to show why I had concerns about bringing Mo Williams and Randy Foye here this offseason: 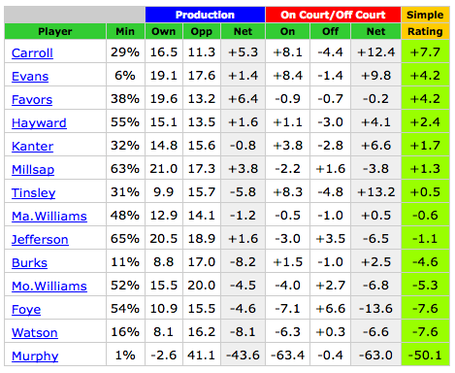 I think Andy had a good explanation of this chart. Mo Williams and Randy Foye have had a really hard time positively affecting the leads when they have been on the floor this season. The -13.6 and -6.8 net scores for those players is really bad. However, you could make the argument that they are hurt by starting with average players, who often get outscored as a group. But let's look at last season as well: 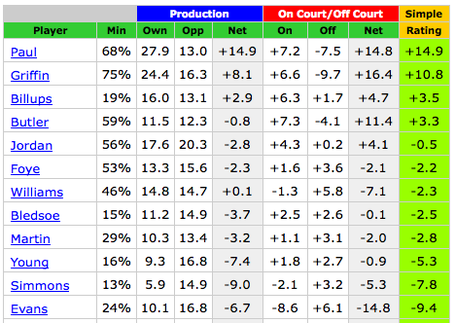 As you can see, although the numbers are much improved, Randy Foye and Mo Williams negatively affected the LA Clippers when they played overall. The interesting thing is that they both played a heavy chunk of minutes off the bench and for a good team. Now you may not believe in +/- numbers, but I think they tell a great story over the course of a season. I have theories about why it is the case, but both Randy Foye and Mo Williams have hurt their teams the last two seasons. 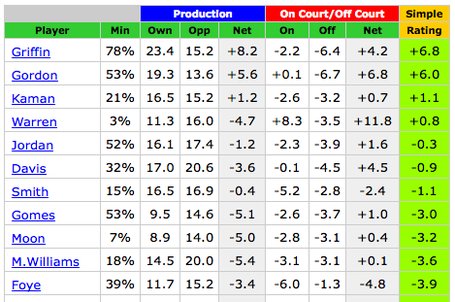 I think this season could be seen as just circumstances going against Mo and Foye, but 3 seasons of data starts to become a trend.

I know I just gave you a spiel about why the Jazz might not trade either Millsap or Jefferson, so let's include both of them in our crazy hypothetical trade of the week: