This is a battle between MyLo's two favorite teams.

This year's Orlando Magic were not expected to threaten for the playoffs this year. So far this season (with 1/5th of it over) they're still quite in the race for the Eastern Conference post-season. The reason why so many people wrote them off is because, well, they lost their two best players from the season before (Dwight Howard and Ryan Anderson), and their best remaining player has played all of 17 minutes this year, and is now out for at least a month (Hedo Turkoglu). Yeesh. All that said, Orlando hasn't thrown in the towel, they're only one game behind us -- and mainly because they've played fewer games.

While the guys who aren't playing are more interesting than the guys who are, we need to talk about who they DO have. The team drafted Andrew Nicholson in the first round, and the rookie power forward has been productive in limited minutes. Former Denver Nugget Aaron Afflalo, former Philadelphia 76er Nikola Vucevic, former Houston Rocket E'Twaun Moore, and former New Orleans Hornet Gustavo Ayon are all more than capable of helping a team win on any given night. Oh, and they still have Glen Davis, Jameer Nelson and J.J. Redick. So, essentially, a lot of guys about the same talent level to be rotation guys on our team, if not start.

The Magic are on a five game road trip, and tonight's game will be game 3. They've been surprising, winning their first two games. However, their entire season seems to have followed the pattern of winning two games in a row, then losing a whole lot more after that. They started the season 2-0, then lost their next 5. Then later won another two, and lost the next three. Just beat the Los Angeles Lakers and Golden State Warriors (a back to back set) by a combined +18 points. That's really awesome, but it's about time they got a loss. It's not magic if they do, it's an established pattern based upon 1/5th of the season.

The Utah Jazz are 27 and 19 against the Magic. No, that's not the home record, that's their all-time history. (Seriously? We've only played Orlando less than 50 times? Man, they're a young franchise . . . ) At home the Jazz are 16 and 7, and I'd really love it if they don't get their 8th win on our court ever, tonight. Last season these two teams only played once, and it was during our super important, end of the season, 5 game win streak in order to make the playoffs. It was a memorable game for us because a) we needed the win desperately, and b) it was like the last really awesome Devin Harris game in a Jazz uniform -- he had 21 and 7, and made 2 threes -- and had the game saving block on a potential Jameer three to win the game.

We can't take much from that game because both teams have made a lot of changes. But it should be noted that the Jazz played great defense against Glen Davis, and while Redick had an inspired game -- they just didn't have the talent to hang with us. Hopefully if we stop Davis tonight, we'll end up with a similar result. 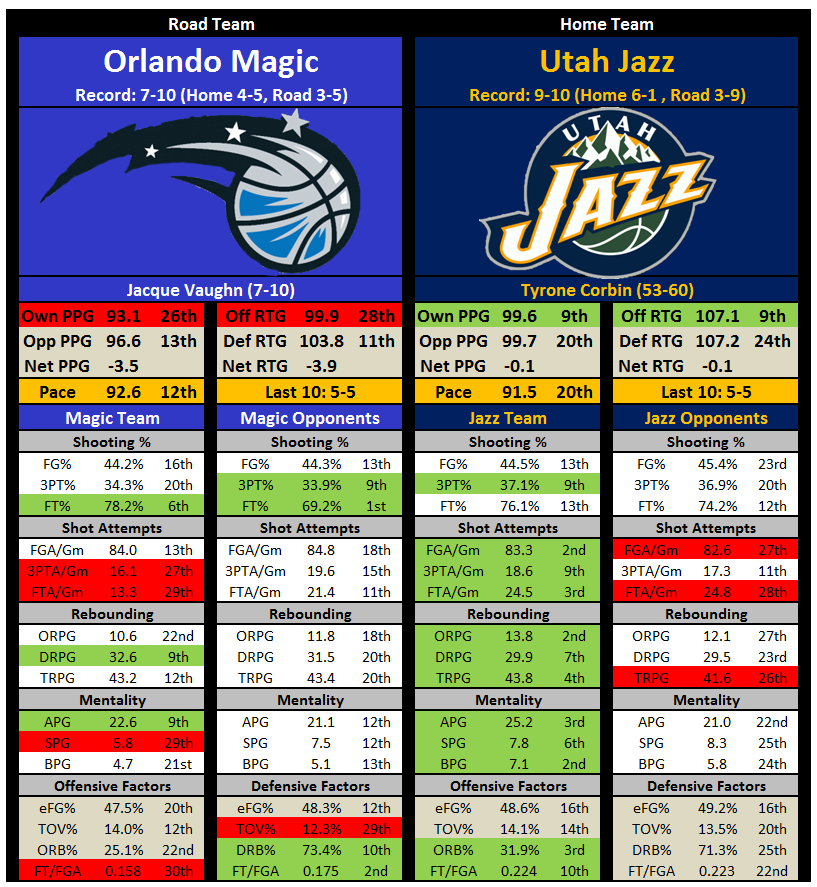 The Magic aren't a great scoring team. They are almost the worst scoring team. That's fine. Why? It's fine because they are a very good defensive team. They are particularly impressive in defending the other team's three point attempts, and the other team at the free throw line. (I guess Big Baby has some really funny jokes to tell while his opponents shoot) Orlando doesn't do it with shot blocking, or steals (they are 29th in that) -- but they don't really sent the other team to the line. They're also Top 10 in getting the defensive board. Orlando isn't spectacular, but they are solid on defense. Offense, well, they are almost a train wreck there -- but I'm not going to dwell on it. In 7 of their 17 games they've had the better offense than the other team when the final buzzer sounded, so kudos to them. They don't get to the line, but are great when they get there.

Their biggest players this year are Aaron Afflalo (16.1 ppg, very solid shooting for a guard accross the board, 3.8 rpg, 2.5 apg) and Glen Davis (15.8 ppg, 8.2 rpg, 2.1 apg). Four other players average between 10 to 14 points for the Magic this season (J.J. Redick, Jameer Nelson, Nikola Vucevic, and E'Twaun Moore), so they spread the sugar around. Their main three point threats are Jameer (5.4 threes taken a game), J.J (4.5), Aaron Afflalo (3.9), and E'Twaun (3.2) -- but only E'Twaun is shooting above 37 3pt% from deep out of that group. Jameer, in particular, is shooting sub .300, while still shooting over 5 a game. Yikes. The good news is that with E'Twuan Moore and Mo Harkless on the same team you have two guys with really crazy names. If you followed our live blog of the NBA draft you know those are things I look for.

Orlando isn't going to get it done with offense, in theory, but their last two games had them putting up 113 and 102 points. When given a chance they can score; I guess the point then is to not give them a chance.

I'm going to avoid being a homer here and say this is a wash. Hedo is a huge part of their team, especially in a post Dwight / post Ryan Anderson Magic organization. Favors is also a huge part of our team; however, it's not like Orlando is full of guys we're going to need his defense against. Orlando has a bunch of solid bigs, but most are prospects or defensive players -- and less of the 'offensive threat' variety.

This is the third game in four nights for the Magic, which is in addition to being their third game in a 5 game road trip. We should use this to our advantage by trying to run on them. But whatever, the Jazz rarely take the advantage of pace when allowed. As a result, get ready to see a lot of low block post ups. Riveting.

Orlando rarely fouls, and we kind of only do well at home when we get to the line. The Jazz lost their last game -- their first at home all season long -- to the Los Angeles Clippers. That star studded group is the inverse of this Magic team. Hopefully the refs recognize this, and the error of the previous crew, and remember that we're the home team. If things go the Magic way (low fouls) then that would suck. The Jazz, 3rd in the league in most FTA, should get to the line. Period. While we're taking more threes this season we're still an inside out team.

We should really focus on the inside because the Magic are #9th best in the NBA at defending the three. The Jazz, #9th best at making them, may be up for the challenge -- but I'm still hesitant to go crazy with threes when the other team doesn't have any shot blockers on their roster. (Sorry Vucevic and Harkless -- you guys aren't DeAndre Jordan)

Paul Millsap has to get out of his funk. He knows Derrick Favors isn't there to breathe down his neck right now, and playing at home after Blake Griffin torched you -- he should really be motivated to get going. Orlando has a bunch of guys his size, and no one really tall. If Millsap is going to get out of his funk, it could be tonight. I want to go into more detail here -- but I also want to get this post out so people can read it. As you can imagine, there was an advantage to splitting up the game previews into a number of smaller posts; it allowed me to pace myself and get them out in time for people to digest. Now? Not so much. These are longer posts. You guys are worth it though. I loves ya.

This may be the game where Randy Foye 's defensive problems are exposed. He's never been great going around screens -- and that seems to be primary how Afflalo and Redick score by. Alec Burks had two successful games in a row on defense against Kevin Martin and James Harden (which most people can't claim), but he had a statistical stinker against the Clippers. (That said, Jamal Crawford torched our entire team -- so it's not like it was any one players fault) The Magic are a balanced scoring team, but guys like Afflalo and Redick worry me. I hope Gordon Hayward plays a lot, his length seems to bother them more than anything we can reliably hope for from any other dude playing SG tonight for the Jazz.

Orlando is the lauded defensive club, but the X-Factor will definitely be OUR ability to defend them -- particularly their shooters.

Hay! @bqrmagic ! Please tell me precisely, in 140 characters, how my team can beat your team! Or if your team has weaknesses.

@bqrmagic This is absolutely not me doing a bad job and zero scouting of the Orlando Magic so far this season. No. Never that.

I always hated the super hyped up Magic back in the Shaq and Penny days; and then in the aborted Grant Hill and Tracy McGrady days; and then again in the Dwight Howard and Hedo Turkoglu days. I guess I'm just a hater, and it's about time I recognized my overt, insatiable hate against hype. Now that they aren't hyped at all I guess I could learn to be cool with them. I am a huge Big Baby fan, after all.

Jazz win, Why? Because Orlando has used up all their Magic on this road trip -- and will get reality pounded back into them by our amazing offense.