Share All sharing options for: The How S*** Gets Started Edition - The Downbeat - #687

As pointed out by Yucca Man yesterday, Ty Corbin sometimes finds himself caught between playing the hot hand or bringing in the veterans to close out tight games. (Sadly, in recent weeks "the hot hand" and "veterans" are mutually exclusive.) If you're wondering whether losing 7 of 9 so far this month has changed the front office's mentality on the direction of the team, you can stop wondering. Asked about the development of young players on KFAN two days ago, Randy Rigby again talked about how long it took for John Stockton to get decent playing time (became a starter in his 4th season) and how long it took for Karl Malone to develop into a force. He then talked about how long Oklahoma City was a losing team before they started winning. "It takes some time to earn the stripes, to learn how to play together, to learn how to not accept losing, and to fight and win and grow." According to Basketball Reference, Karl started every game in his Jazz career except for 5 games in his rookie season. He averaged 30.5 minutes per game his rookie season (after which the Jazz traded Adrian Dantley) and 35 minutes his sophomore season (while averaging 22 & 10), and never averaged less than 35 MPG again the rest of his career. That aside, I'm not sure how comparable these examples are. How many Johns-and-Karls (and Kevin Durants) are there in the league at any given time...or even in a generation? Rigby also mentioned that the Jazz's research shows that the fan base is very happy with the talent of the team and say that the team is fun to watch.

Following yesterday's "We Consistently Do Dumb Sh*t" theme, this is how sh*t gets started... (This seems like a good time to remind everyone of our no-cursing policy. No cursing.) BTS tweeted this during the Memphis game:

After the game, he expanded on the tweet in the Trib:

Yesterday at practice, one media guy went around asking everyone about the quote with the assumed context that Al was talking about the young guys being surprised that the Jazz were winning, and whether their expectations needed to be adjusted because they were not where they should be. Earl: Um, I didn't even know he said that...um, maybe I wasn't in the game. I don't know. I'm not sure what he meant by that, but I doubt we were surprised by us winning...I don't know, you have to ask him about that. I'm not sure what he was talking about. Ty: It's just what it is, man. For a lot of these guys, it's the first time going through it. And for everybody it's the first time going through back-to-back-to-back or a condensed season. So even the guys that's been in the league for the last few years have gone four games in five nights...it's so many games so quickly. And then the guy asked Al: It was on Twitter that you joked with your teammates late in the Memphis game that they looked like they were surprised that you guys were winning and playing that well. Is that just a funny, throwaway line in the middle of a game, or is there really a level of expectation that needs to change? 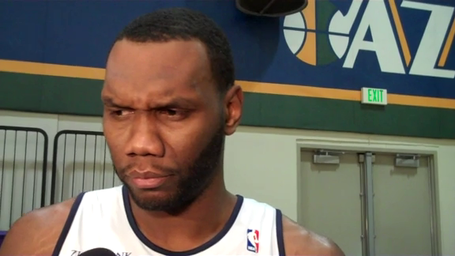 Confused Al: You said I said it on Twitter? Media guy: Brian T. Smith tweeted that out during the game. Al: No, what it was, he was wrong about that. What it was, I went up to shoot the ball, and I passed it to Raja and he hit the 3. And the team, the bench, jumped up. And I said, "Y'all act surprised that I passed the ball." I said I didn't do it more often because the way the team jumped up when I passed it, they were so surprised, so that's what it was. (All quotes from KALL.) In the meantime, Al is probably now thinking that BTS is BTS'ing him once again while others are wondering why the young guys have such low expectations of the team...

Take a shot every time Devin Harris says "obviously" during this 1:30 clip from KALL. Report back on how drunk you get on a scale of 1-10. Devin Harris shootaround (Wait, what? Wrong crowd for this game?)

Seems like the two overriding issues with the Jazz lately have been 1) playing time allocation and 2) whether Devin Harris is a good fit for the Jazz. While he was talking about Linsanity in the quotes below, Earl Watson (who, by the way, is a "Leave it to Beaver" fan) addressed both of these issues in a way that really applies to the Jazz:

Style of play has everything to do with it. First of all, give the coach credit to even go to him and give him an opportunity to play because in situations like that, [most coaches] stick with players who have more NBA merit or players who have bigger reputations, and he could've easily just written Jeremy Lin off and never gave him the opportunity. But the fact that he gave it to him, the fact that he gave him the opportunity to go out there for 40+ minutes a night, and he's giving it to him to just go out there and do what he does and be himself and play in an amazing comfort zone, I think it's a lot of credit to him.

You ask any player, every player's gonna tell you the system and playing time are very key for a player to having a great, explosive career beginning. Every player will tell you that because not every player is made for every system. I knew this when I was 18 years old, having a long conversation with Coach Wooden, and I wanted to ask him what was the same ingredient for every championship team. He gave me the statement that no one cared who got the credit, which is big, and he also said "I know my personnel." He said, "It was only twice in my career that I never ran the UCLA high post. Do you know when that was?" I'm like, "No. I really don't know." He was like, "When I had Bill [Walton], and when I had Lew Alcindor. It makes no sense, Earl, to have those big guys away from the basket." So system is everything. (KALL)

FWIW, I think this roster has the "no one caring who gets the credit" ingredient. Paul said Al should've made the All-Star team; Al just wanted anyone on the team to make it so that the team could get recognition for its strong January. The other ingredient remains a work in progress.