What Is an OKC Model?

Share All sharing options for: What Is an OKC Model?

Over the next several days, I will be examining perceptions, realities, and takeaways, from the idea of building a team, namely following the "OKC Model." What I find fascinating is how Jazz fans interpret "following the OKC model." I asked on twitter what it means to follow that model and got several responses. I think the two most common sentiments are that following that model is "being really bad for a few years and collecting top 5 picks" and "get lucky" or "have a superstar fall into your lap." There is no denying that a measure of luck is needed in putting together a championship team or in the draft, but ask yourself, "how much does luck play into the way OKC has done things?" Is it the most important aspect of their success? Is it even a top 5 attribute?

Like I said, I will spend the next several days talking about all the aspects of this model, but today I am going to focus on one aspect that separates that rebuild correctly and the ones that don't: possession distribution.

If you had one complaint about the way the Jazz are treating their four young guys (Alec Burks, Derrick Favors, Gordon Hayward, Enes Kanter) it would be playing time, I would imagine. The truth is that the Jazz are failing these guys in the way they let them play. Before I go any further I need to explain what is referred to as "usage" in the NBA statistics world. In short, usage measures how many possessions a player gets, or how often that player has the ball in their hands. When a player has the ball in their hands, they can either end their possession on a shot attempt, a free throw attempt, an assist, or a turnover. Usage measures how often that happens for a player. So if usage is high, then that player leads the team in essentially shot attempts, turnovers, and assists combined. Is that enough of an explanation to move forward?

Today, usage is going to teach us about how a team values, or "develops" their young studs, specifically wing players.

Let's take the Thunder for our first example. The Thunder not only drafted Kevin Durant and Jeff Green in 2007, but they gave them the keys to the car in terms of playing time and usage. They let them have the ball in their hands. Here's a graph to chart how often Kevin Durant got the ball during his rookie year via basketball-reference.com: 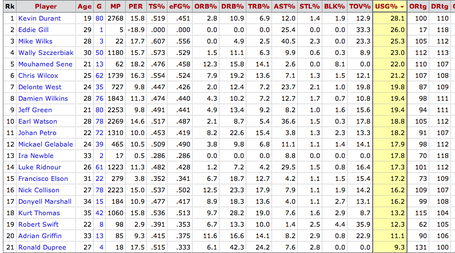 Notice who had the highest possessions on the team that year. It was a 19 year old Kevin Durant. That team won 20 games that year and if you notice the offensive and defensive rating of Kevin Durant he essentially made the Supersonics 10 points worse when he was on the floor. Yet the team kept with him, knowing that later the learning experience of shooting and passing and dribbling and turning the ball over a lot would pay off. Let's look at the next year: 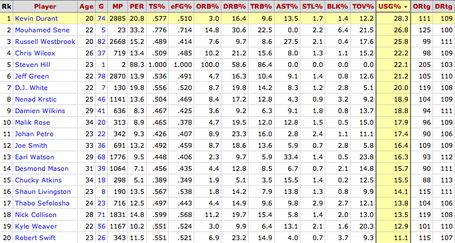 Notice two things: One is that a 20 year old Kevin Durant and a 20 year old Russell Westbrook are young and inexperienced, but they are the two top guys in terms of usage (Sene doesn't count since he played a total of 23 minutes that season). And also notice that Durant now had a positive effect on his team when he played (111>109) and Westbrook had a poor effect on his team by 12 points per 100 possessions. This team only won 3 more games from the previous year and were able to draft James Harden 3rd overall. Lets see what happened when Harden was introduced to the mix:

Again you can take DJ White out of the mix due to playing only 100 minutes on the season, but there are the 3 best players on the team with the ball in their hands the majority of the time. Durant is now greatly helping his teams' production and Westbrook is having a neutral effect on the team. Harden is also helping the team. This team won 50 games that year and went to the playoffs. After drafting Durant, the Sonics/Thunder spent only two years being bad and missing the playoffs.

Is this proof that you can develop your rookies into winners quickly by giving them tons of possessions? No. But it's an example of a time it helped. Here's another one: 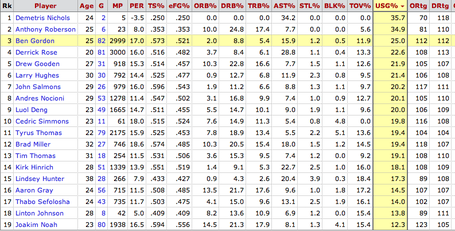 His rookie year Derrick Rose was second on the team in usage of players that played more than 25 minutes. Notice what the Bulls did afterwards though. They let Rose's biggest competitors for usage go to other teams in free agency (Ben Gordon, Drew Gooden) and then built complimentary pieces around him. The Cavaliers did the same with Lebron James. Dwyane Wade had a higher usage his rookie season than his teammate Lamar Odom. The Cavaliers are a surprising 11-16 this season, on pace for a 20 game improvement and it should be directly attributed to the fact that their future franchise player (Kyrie Irving) has the highest usage on the team.

I know at this point you are saying to yourselves, "okay, so if you have one of the best players of all time, then you give them the possessions. That makes sense. The Jazz don't have all-time greats." And I would agree. My response to you would be, "How can you be sure the Jazz don't have an all-time great on the roster right now?" While we knew that James, Durant and to an extent, Rose would be great, did we know that Wade would be when he was a rookie?" No, we didn't. Can we be sure that each of these great players didn't become great, because they were able to develop the games with the ball in their hands and with the confidence of their franchises? No, we can't.

Here's another example I find compelling:

Again you will notice that Kobe, who was just out of high school and mostly potential at this point, had more possessions than guys like Nick Van Exel, or Eddie Jones, EVEN THOUGH both of those guys had a more positive impact on the team than Kobe did. While we now know Kobe as an all-time great, he wasn't his rookie season. But the Lakers put confidence in him, making him the future.

Now let's see what the Jazz are doing to their young wing players:

Do you see any problems with the way we are using our wing players? Alec Burks has a great usage percentage, but he's also playing the 11th most minutes on the team. Gordon Hayward, who is playing a lot of minutes (3rd most on the team) is 9th in the team in terms of usage. He is just standing in the corner and let the other guys get all of the possessions. It isn't fostering his growth the best way possible. Like most of you, I don't know if Hayward or Burks are going to become all-time greats, but I know that the Jazz aren't giving them the chance to become so, like other teams have done. Just for fun, let's list some other all-time great wing players and see what type of possessions they got:

Michael Jordan- Highest on the team his rookie year.

Reggie Miller- Tied for highest usage his 3rd year. He may be the exception thus far.

Joe Johnson- Also an exception, but was still top 4 every year with Phoenix.

in short, by not playing Burks, or by not giving Hayward the majority of the touches and running the offense through him, the Jazz are in essence saying, "we don't believe you will be an all-time great" or at least "we don't think you are worthy of the usage. Because, no matter what Hayward or Burks become as wing players, no great wing player has been alloted the treatment that Hayward and Burks have this season.

Next week we will look at the historical treatment of great big men in terms of usage.