"The jazz Are Passing Out Freebies" Edition- The Downbeat - #689

Share All sharing options for: "The jazz Are Passing Out Freebies" Edition- The Downbeat - #689

That was a heartbreaking loss last night. I should know because I was there. I figured that I haven't been to a home Jazz game in almost 2 years when I stopped to think about it, since I live in North Carolina. It was a great atmosphere just like old times when I could catch several games a year.

I thought the sportsbeat triangulartable that KSL did this weekend was fun to see. Obviously these guys aren't being fed information that is too secret, but I think they have premonitions from being around the team that none of us would have. One thing I thought was interesting was their mention of team chemistry. They all agreed that the Jazz players like each other, but aren't necessarily pleased with each other on the court, which I think has been pretty obvious. Click on the link above to be magically transported to the ksl website where you can watch the video in its entirety. Worth 8 minutes of your life. 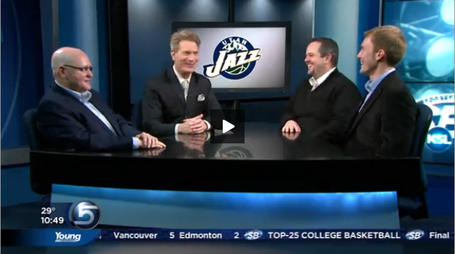 One good Jazz beat writer that wasn't part of the KSL piece is The Salt Lake Tribune's Steve Luhm. He's a funny guy and a good follow on twitter (@sluhm) if you are into that sort of thing. But one tweet he made during the Houston game on Sunday, caught my attention:

I was alarmed. If that was true, then it is a miracle the Jazz have won as many games as they have. I took it for truth, because the Jazz foul their opponents a lot and secondly, Al Jefferson is the primary shot taker in the offense and he averages only 3.3 free throws a game.

But as I informed Steve on twitter, I believe it is an honest mistake. I looked at the free throw attempts of every Jazz game, and while there were a couple of games where the Jazz were crushed by opponents at the free throw line (I'm looking at you Oklahoma), the Jazz have actually shot more free throws then their opponents in 14 of their 31 games.

Speaking of opponents' free throw attempts, they continue to be a problem for this Jazz team. It is often said that this Jazz team lacks an identity, but I think their identity is to send the opposing team to the line a bunch of times. If you didn't notice, the real reason that the Jazz lost last night, was due to their fouling the crap out of the spurs. Nine minutes and 48 seconds: that is how much time was left in the 4th quarter last night when Enes Kanter put Tim Duncan and the rest of the Spurs in the bonus. The Spurs ended up making 8 of 10 free throws in the 4th quarter while the Jazz only shot 4 in that same period, making 3. That's your ball game. And before you blame the rookies for those 5 fouls in the first 2 minutes and 12 seconds of the quarter, two of them were by Earl Watson, one by CJ Miles and one by Kanter and Burks each.

[Ed Note. Removed a picture of Kobe Bryant being fouled by Paul Millsap and Ronnie Brewer]

Back to a trivia question for the day:

If you took the all time list of every player to don a Jazz uniform, what college was attended by 5 of those players, the most of any college?