Is Popovich screaming at the refs, screaming at an approaching sideline reporter, or just yawning? I can't tell.

First of all, the Spurs are really good.

Second, the Jazz had their chances. Check out the game flow: 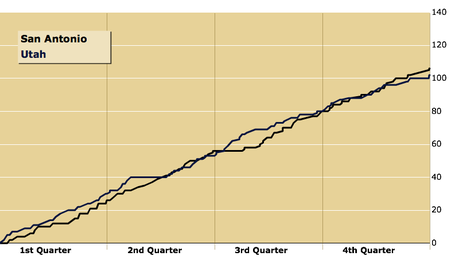 Twice our guys got decent leads. Twice San Antonio came back. And they finally got their biggest lead the one time that ultimately mattered: in the end.

No, I'm talking about how the game was called by the refs. For the most part, the refs let them play. It was physical, there were a lot of bonking around, and it was all let go. Classic 80's basketball. And it wasn't that the refs were screwing the Jazz—they were swallowing the whistles on both sides. Nobody was getting screwed. They were just letting them play. You could push your guy out of the key. He could lean into you, shoulder down, and try to push you back. And the refs just stared at them.

I wish every game was officiated like this one was. It made for a fun game. A game with flow. A game where the tempo, the pace, and the rhythm were dictated by the players, not the whistles.

Anyway, on to the analysis:

This was a microcosm of the entire game:

The Jazz also start out getting assists: 6 assists in the first quarter (14 made shots). It wouldn't continue, of course. Reminiscent of the Houston game, they only got 11 more assists the rest of the game. But in this quarter they were passing. They were also spreading the shots around (Al scores 8, Devin scores 7, CJ scores 7, Josh scores 4, Millsap scores 2, and Enes scores 2),.

Unfortunately they were also a little unprepared for a white, redheaded, tall dude launching threes. He went 3-3 from behind the three-point line in the first quarter. And he usually scored them ... this will shock us all ... after the D broke down via a Spurs P&R.

But on the upside, watch this play at the end of the first quarter: First Derrick Favors makes body contact on the screen. It wasn't quite Stockton-esque, but still much better than the screening in the Houston game. Next watch how they run the internal screens and cuts while Earl drives. This gives Kanter perfect position to get the pass and throw in a layup.

I kind of wish the end-of-game plays were like this.

The quarter includes the Alec Burks Show—the most tantalizing teaser Hollywood has ever come out with. Every time we see another one we're left drooling, almost going crazy wondering When Will The Full Length Feature Arrive?

On the other hand, it also includes a 5-minute stretch in which the Jazz can't score. Everyone managest to contribute to the futility: CJ, Millsap, Devin, Hayward, Al, and Alec all miss shots and/or commit turnovers during the time. It wasn't a pretty stretch, and it let the Spurs get the lead.

It included this beautiful sequence from Millsap.

I wrote in the Houston review about how Favors went 1-7 and Millsap also went 1-7 to start this game. But Millsap has a chance to salvage a horrendous start. Favors (and the rest of the secondary guys) don't. A 1-7 isn't a start—that's their entire game.

Millsap's gunk here was as bad as I've seen. It just shows you that a really bad stretch doesn't necessarily it will continue indefinitely.

Anyway, the Jazz can't overcome the five minutes without scoring and the Spurs head into halftime with a three point lead. They also let this happen:

The Jazz start strong. And go up 11 on this:

But it won't continue. Tony Parker, Tim Duncan, and Matt Bonner — the SA BIG THREE — happen. The gap is cut, and from there on out it's a tight game.

The quarter ends 80-80. Thanks to a crappy bit of boneheadedness. There's just seconds left, and the Spurs are inbounding. The Jazz tightly cover they guy running back toward the Spurs basket. They keep him from getting the ball—you know, the guy who would never be able to turn around and run back for a shot before time expires. And by covering him so tightly, they let the inbounds pass go to a guy streaking toward the Jazz basket so he could throw up a good shot. Of course Neal hits it.

This is the difference between Popovich and Ty right now. It was a great inbounds play (with the decoy guy running back). And it was a boneheaded defense (defend the guy with no shot to make the play, and let the guy with a chance have an opening). It cost the Jazz three points. In a game like this, that's killer.

In a tight game, you need to do everything you can to win. You have to be on your toes on defense, you have to execute well on offense.

With six minutes left, it's tied at 92. Then the Spurs get up by four. Jazz cut it to two. Spurs go up four, Jazz cut it to two. Etc. Then Josh Howard happens: a turnover off a bad pass, a nice steal, almost throwing it out of bounds (CJ saved him), then a terrible hook shot contested by three defenders.

There's only a minute left at this point, so that sequence really hurt.

But the Spurs miss again, and the Jazz call a timeout. And this is what they come up with:

Really? That's the play they came up with?

It wasn't a terrible play. At least it wasn't an Al iso on the block. But compare that to the play the Jazz pulled at the end of the first quarter. Wasn't this play worse? Would you rather have Al shooting an 18-foot jumper or Kanter putting in a wide open layup?

Hoops Ideas has been hammering the concept of fewer timeouts and dead time at the end of games. They say that having coaches draw up plays like this actually hurts the offense (and they have data to support the claim). And as someone who has watched the Jazz for years, I have to say their end-of-game plays are often so much worse than their regular flex sets. How many games have we watched Deron dribble out the clock, get a pick, and then throw up a 20-foot jumper?

The more I watch, the more I agree. Just run a regular set, the ones the guys can do without a timeout, and execute as well as possible. The rate of success would be much higher.

Anyway, the Jazz don't foul with 30 seconds left and down 2. I thought it was a decent strategy. If you foul, you are likely down four. If you don't foul, you at least have a shot at a stop and are still down just two. But they don't get a stop. The Spurs are good, and Richard Jefferson hits the corner 3.

It was a good game. I really liked how the refs swallowed their whistles. I liked that the teams really didn't turn the final minutes into a foul/timeout fest. Our guys played hard, and the Spurs are simply good. They rode the Matt Bonner train the whole night.

But in the end, the team is now below .500 for the first time in more than a month. Bummer.