After the break we have no more excuses. Every excuse we have should be addressed, and now it's time to either make something happen or suffer a lot of losses. Every team's gonna pick it up after the break to position themselves for the Playoffs, so intensity picks up, focus picks up. If you're a young team, it's no longer an excuse. For us, we have no more excuses. (2)

Based on this quote, I decided to take a look at Ty Corbin's post-games and see why, in his opinion, we lost individual games, and what should no longer be an excuse after the All-Star break: Feb.7 at Indiana: "...we didn’t like our effort until the third quarter. If we would have done what we did three to four minutes into that third quarter for the rest of the game, then we could play with anybody." Feb. 10 vs. Oklahoma City: "We missed shots...we missed some shots...we just missed shots." "The biggest difference, they shot 32 free throws to our 13...they got a lot of free throws...a lot of free throws, it's interesting. The fouls were close, but the free throw attempts were a large difference between the two, so I think that was the big difference in the ball game." "We didn't get a lot of calls to make shots, but...we just didn't make shots." "I don't care to make a comment on what the referees doing. We want to play how we want to play. We gotta adjust to the way they calling the game, but we just didn't get any free throws tonight." Feb. 14 at Oklahoma City: "It is the third night of a back-to-back. Everybody is a little tired and we ran out of gas." "We are used to playing back-to-back, but these players are not used to back-to-back-to-back. They all looked tired." Feb. 19 at Houston: "Bottom line, we just didn't make shots. If we make the shots...it'd be a different ball game. They got a little physical with us, we didn't get the shots inside." Feb. 20 vs. San Antonio: "They got some free throws there at the end...it's discouraging when you go inside some and you don't get the call that you think you should get." Feb. 22 at Minnesota: "You can't get cautious and stop executing. I thought we stood around a little too much. We didn't get the ball into the deep post [which] we were doing earlier...we got cautious...We lost our energy a little bit.

The title of today's Downbeat comes from last night's episode of "Parks and Recreation." Ron Swanson throws down some wisdom that could be perceived as completely relevant to the Jazz: (Direct video link here if the embed doesn't work.) Even when they've made big shots, Al Jefferson and Josh Howard have taken a lot of flack during the Jazz's losing spell this month. At times, I wonder whether it's unfair to blame them. Jeff Hornacek said on KFAN a day ago, "In this offense there's a lot of things that are geared to getting the ball inside to our guys." David Locke tweeted this today:

In Al's case, if he is playing black hole offense because that's what the coaches are calling, our issue shouldn't be with him. In Josh Howard's case, he is a player in a contract year. What do players do in contract years? They shoot a lot, because players get paid for scoring. Kevin O'Connor knew what he was going to get when he signed Josh Howard. Ty Corbin knows what he's going to get with Josh Howard when he puts him on the floor (and, if reports are to believed, considers starting him). On the opposite end of the spectrum, we have the young guys. Enes Kanter and Derrick Favors' minutes have gone down in six and four straight games, respectively. In the 13 games in February so far, Kanter has played more than 20 minutes in a game just twice. Alec Burks, just once. Jeremy Evans has had DNPs in 8 of the 13 games. In the Minnesota game, Kanter, Favors, Burks, and Evans combined for as many minutes as Ricky Rubio. According to Locke, Gordon Hayward didn't touch the ball once in the final five minutes of the Spurs game. We go around and around this issue on a daily basis. Young guys vs. vets. Competing vs. rebuilding. Winning vs. development. Jeff Hornacek seems to talk in circles when he's talking about the young guys as well. On Gordon Hayward, on the one hand:

How's a guy gonna score...if he never touches it? Sometimes it's not his fault. Sometimes it is, 'cause sometimes he should be able to move without the ball, make some cuts, read how the team's playing, put yourself in the position where you might get a kickout pass in those situations.

Yeah, you'd like to stick him out there for 30 minutes a game, but when Paul and Al play like they do, it's sometimes hard. Coach is trying to find these guys minutes and trying to get them more time and try to continue their development...When you come in for a couple of stints of six, seven minutes twice a game, [you can't expect them to] score 15 points and get 20 rebounds in 15 minutes. So they're doing a good job. They're young. They're learning. We want them to continue to improve. (2)

I know less than nothing about college hoops sports, but I take it BYU played/is playing Gonzaga sometime in the near future or recent past. Toby Howell, the program director for Gonzaga's flagship station (1510 KGA) was interviewed on KFAN and of course, the Stocktons came up. On David Stockton, who is a redshirt sophomore averaging around 17 mpg this season:

He's a very dynamic player and a fan favorite in Spokane...[His minutes and] production have gone down, but he does a lot of the intangibles that you need for a team. He's a good sparkplug off the bench...He's coming along very nicely and he's definitely one of the guys the freshman guards are learning from. He has a tremendously high basketball IQ..he's a great teacher for these guys and a great piece of the wheel for Gonzaga this year.

He is there [at home games] all the time. John's an assistant coach for a girl's high school basketball team here in town, the Gonzaga Prep basketball team. You'll see him sitting on the bench at high school games, doing a little coaching, and you'll also see him in the crowd at all the Gonzaga games. He doesn't miss any of the games, him and his wife and some of the kids are always at the games, so we get to see him quite a bit. It's a lot of fun. (2)

Get psyched for the dunk contest, courtesy of @da_breezman: If Jeremy performs well in the dunk contest, we could see a lot of NBA fans who previously were unaware of his existence tuning into Jazz games to see Jeremy play. Of course, this is likely all they'll see: 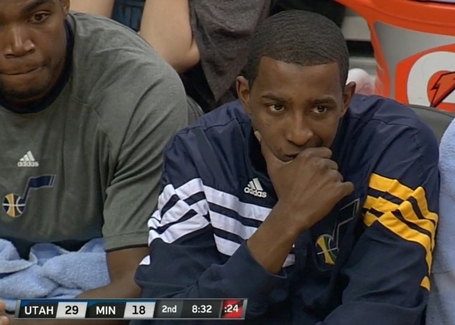