Share All sharing options for: King Me - The Downbeat #695

First of all, congratulations to the fans of the Sacramento Kings. It looks like a deal is in place to build a new stadium and keep the ball club in a town that has been very supportive, despite some awful years. I think I speak for everyone when I say that Kings fans will always hold a special place in our hearts because of the send off they gave Stockton in his last NBA game:

Now that we're done with that, last night's game was very disappointing. Amar covered it in the post game comment thread, but the starting bigs were absolutely horrible. While Favors didn't have a great night shooting (Thompson was very physical with him) he did play great defense and haul in 11 boards, including 4 offensive.

The turning point in the game came in the 4th quarter. I sent out a tweet saying that the starting bigs came in with about 6:00 left in the 4th and to mark it down. Well, this is what happened:

Thanks to the amazing people at PopcornMachine.net we have a graphical view of it. See that plunge midway through the 4th quarter. That's when Al and Sap checked back into the game. A seven point swing that they couldn't recover from due to unacceptable defensive lapses.

This play from Alec Burks. Also, this pass: 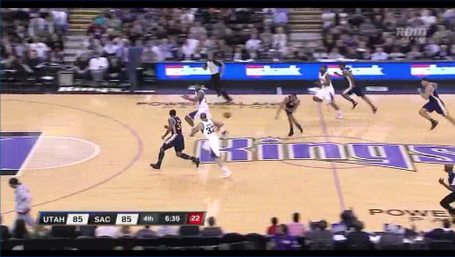 Amar alluded to it yesterday, but March is going to be rough for the Jazz. They have games coming up against Houston and Miami, followed by a road trip with stops @ Mavs, Cavs, Bobcats, Sixers, and Bulls. By the end of this stretch, they could easily be 1-10.

Brace for the worst kiddos, it could be a bumpy ride. Its only going to look worse once Amar puts it into graphical form. The question is, at what point does the Jazz brass throw caution to the wind and play the best players in games? Its going to be interesting to see how it all unfolds.

One thing missing from the argument of winning versus developing, and its impact on attendance is the comparison to other teams that have lost their teams. The Sonics, being the most recent, certainly had some bad attendance, but they also had the disadvantage of not being the only show in town. Further, every other team in the NBA that has moved has had owners with far less loyalty to the community than the Miller's have exhibited.

So, I guess the big question is, would you or even your friends or family that would be considered "casual fans" stop spending money on the Jazz if they struggled for 2-3 seasons with young players?

Personally, I think it will always come down to the effort Utah fans (and Jazz fans everywhere) see on the court.