Al Jefferson summed it up best:

"We dug ourselves in a deep hole. We can’t do that no matter who’s on the floor."

As much as we try to remain optimistic, sometimes we have to be realistic. As Clark mentioned in The DB this morning, we could really see this team fall back down to Earth during this month. If this team has any hope of making the playoffs, as is their stated goal, they're going to have to get back to the defense that they played during their streak in January. In addition, these young guys are going to have to step up and play well on the road.

Complete review after the jump.

Tonight wasn't just a loss to Jeremy Lin playing off the charts, it was a loss to the Pick and Roll. According to mySynergySports.com the Knicks ran the PnR on about 32% of their possessions, but that's not particularly surprising for a D'Antoni offense. What is frightening for the Jazz and their fans: they were successful 57% of the times they ran it, either by the "roll man" or the ball handler finishing. To sum up those statistics: That will lose you a basketball game 90% of the time. What's worse, is these weren't being run by Amar'e Stoudemire, they were being ran by Jarred Jeffries and Tyson Chandler. Certainly, a lot of credit must go to Jeremy Lin, who as we all have heard 4500 times by now, was very good at keeping his dribble and patiently waiting for the Jazz to miss a rotation or give him an open lane. Lets take a look:

Here is the play setting up. Lin is going to start at about the elbow of the 3pt line and Chandler moves to initiate the pick. Al sees the play transpiring and Bell is pointing out where he is going to need coverage. Millsap spies the play from the weak side of the paint and is, correctly, leaving Jeffries out at the arc. Hayward has to stay close to Melo, which helps the Knicks with spacing. 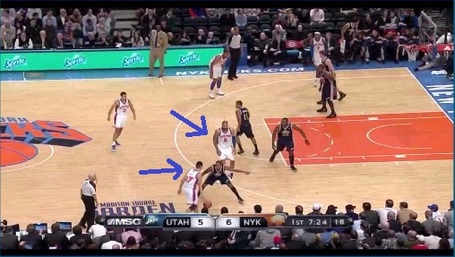 Now, the play is going and things look pretty good, or at the very least salvageable. The glaring problem is that Bell gets beat before anything happens. Its hard to tell from the picture (full video below), but Chandler never really sets the pick. Raja lets Al come over to help, which is fine if everything else goes right. Al is in good position to cut off or trap Lin, Jeffries is still no worry, and Hayward has the outlet to Melo cut off. Finally, Millsap is moving to cover the paint/ Chandler. 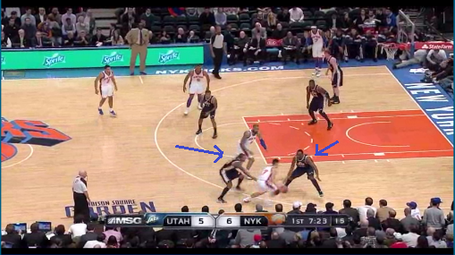 From here, Raja should know that Millsap has the paint covered, most likely by Millsap letting him know. This would allow Bell to close the trap or stay between Lin and Chandler, or Lin and the basket. Like this: 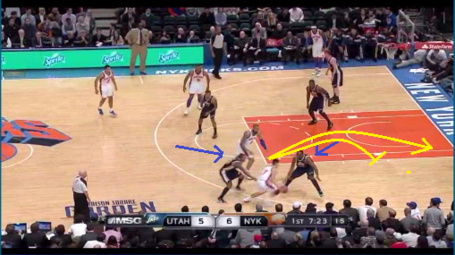 That's not how it plays out, and you can start to see why, above. Raja is stationary and Lin is already making a hard cut to the basket. Al is moving to cut him off for the trap, but I think the only big guy on the team that has the lateral quickness to get there in time is Kanter.

In this part of the sequence, Hayward, Watson, and Millsap are in the correct spots. 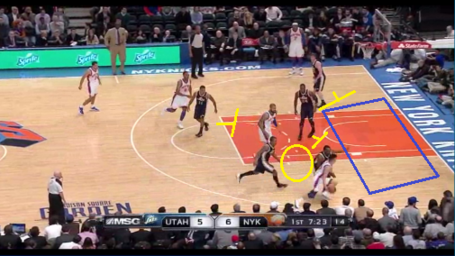 Now, we see Raja is completely out of the play. His reaction was too slow to make either of the moves that would have helped the defense and just look at all that beautiful, open hardwood.

At this point the defense is sunk. 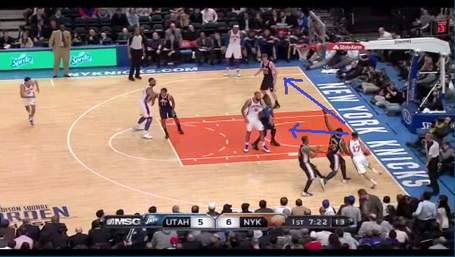 If Millsap moves to cover he leaves 7ft of Tyson Chandler open for the lob, so the best bet is Hayward to come move to contest Lin at the basket. However, the most likely outcome of that is Lin on the free throw line or Melo wide open for the corner 3.

What an awful, awful game by all of the Jazz players. Millsap couldn't make a bucket. Big Al couldn't haul down a rebound. Harris couldn't keep Lin from doing whatever he wanted.

The first quarter showed us what the game was going to look like and by halftime we pretty much saw what the final point differential was going to be.

The Jazz did manage to have a good 3rd quarter offensively, but they also gave up 24 points, which means they didn't play much defense, either.I'm not sure if the coaches didn't pick up on it sooner or if the players just weren't doing it, but Lin was really struggling going left. He was doing everything he could to not go to his off hand in the first half and I thought the Jazz did a better job of pushing him that way in the 3rd quarter. The problem was, when Lin was struggling Novak was bombing threes with his eyes closed.

Having said all of this, the Jazz went into the 4th only down by 2 points. What happened? The bench happened. They came in and allowed the Knicks to build a 7 point lead and weren't able to get it closer than that, so Coach Ty was forced to put the starters back on the court. They managed to get within 5, but every time they did the Knicks pushed it to 10 and that's where they stood with about 4:00 left in the game.

They actually put together several minutes of good defense, forcing the Knicks into 3 or 4 bad three point shots, however all of them ended in tip outs or offensive rebounds and the Knicks burned about 1:30 off the clock with those consecutive possessions. Keep in mind, at this point the Jazz were only down by 6. The dagger came after all of these chances as the Jazz had yet another fantastic defensive stand only to have none other than Jeremy Lin drain a last ditch effort 3. That was all she wrote.

This was a tough decision. Truthfully, the only ones I wanted to include were GH and Raja. I thought about adding CJ because he was the best one off the bench, but he just didn't get enough time on the court to have a real impact, because of foul trouble. Alas, Amar wouldn't let me put Coach Lowe and Coach Hornacek on there (Ty should have tried Evans and Burks), so here we are.

Hayward and Bell were easily the bright spots. Hayward played with confidence and I thought the Jazz should have tried a little harder to play inside-out with Bell, as his 3pt shot looked pretty good (he went 2/4).

Harris' numbers look decent except for the 3 TO's to 4 AST and his defense was not very good, save for a portion of the 3rd quarter.

The good news is there's not much time to cry because the boys are back at it tonight against the Pacers. Look for the preview this afternoon.