Note: no wild dream this week. Sorry. My dreams have just been non-basketball related and kind of boring.

And so the Jazz roster now stands at 14. If you missed the news, the Jazz signed FA DeMarre Carroll. He's a 6-8 Forward, most recently out of Denver (four games played this season). He's taken six shots this year and made them all. He's a career 41% shooter, but he does not shoot threes. Except for the rebounding, he seems like kind of an extremely poor man's Kenneth Faried.

Thus far in his career, his best performance was his second game in the league: 12 points, 7 rebounds, 3 steals, and 5 fouls in 32 minutes against the Toronto Raptors.

Why the Jazz signed him is a bit of a mystery—especially since they already have 3 decent players that have a hard time getting playing time.

Some started thinking trade conspiracies as soon as he was signed. Or maybe it's because the Jazz liked his hustle. Perhaps they wanted to have two 7-man teams for inter-squad scrimmages. Me?

I believe the Dwarves felt uncomfortable going after a dragon with a party of 13, and Gandalf had to get creative to get a luckier number. Now can he find a magic ring to: 1) save our butts and 2) bring on an apocalyptic war 60 years after we win back Esgaroth?

Many moons ago, when the Jazz sat at 6-3 after five straight wins (four of which were against suspect teams), I wrote that the next 15 games would be a sample better representative of the NBA: some bad teams, some mediocre teams, and some good teams. How did the Jazz do? They went 7-8. Considering they still had a fairly easy schedule in terms of home vs. away games, that has to be disappointing. 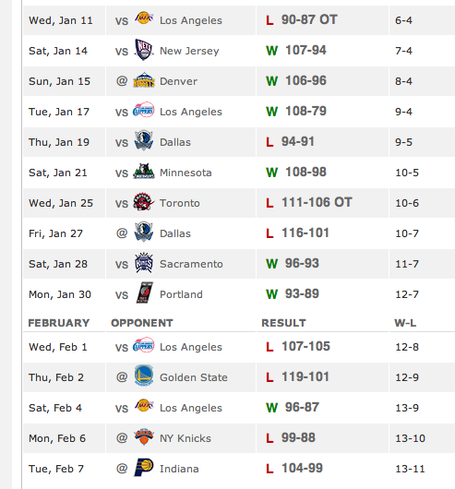 And now the schedule gets harder.

People are starting to notice our young guys—and not only that we have several of them. Hayward has been chosen for the rookie/sophomore game. He's excited, but in classic Hayward form can't help but defer some of the honor to his teammates:

Sebastian Pruiti (the former NBAPlaybook.com guy who now writes for Grantland) has released an updated rookie rankings, and our own Enes Kanter makes his number 3 spot. This is awesome, because Kanter doesn't just get a write-up—when you're in the top 5 you get an NBAPlaybook.com-style video to go with you.

Here's a bit of what Pruiti has to say:

Kanter has done a very good job of moving without the ball. When his teammates drive into the lane, he finds space around the rim, catches the ball, and finishes in traffic. Kanter scores 1.192 points per possession while cutting away from the ball, and this puts him in the top 50 percent of NBA players.

I think most of us have been pleasantly surprised at how quickly Kanter is developing.

True Hoops just launched a new blog that I think could be filled with brilliant stuff. It's called HoopIdea, and it's dedicated to rule/system changes that could be made to make NBA basketball better. Here's its basic thesis:

We want a purer form of basketball. When you play a pickup game, the game flows continuously. No one is trying to get the other team in foul trouble. No one calls a timeout. Defenders don’t worry about the restricted area, or try to take charges. No way. Players try to make plays.

Some of the suggestions in the comments are predictably gimmicky and idiotic (4-on-4 in overtimes, soccer-style substitutions, 4 points for a half-court shot—I think Celtic fans just relived the Antoine Walker years with that suggestion and almost died). But I'm curious to see what they come up with in the actual blog posts.

Me? I don't know what rule changes would fix things, but the worst in-game frustrations are ticky-tack fouls and flops. I also have a scheduling crusade: 62 game season. I'll explain why sometime.

Does anything change regarding what you hope to see each game if the Jazz are or are not a playoff team?

For me it makes all the difference in the world—but I'm curious if others are the same.