Share All sharing options for: We Get to Smile Again - The Downbeat - #696

It is so much more fun when our team wins.

For me it wasn't just that they won. It was how they won: by pushing the tempo and making passes to cutters. Check out this run-down of made shots in the fourth quarter: 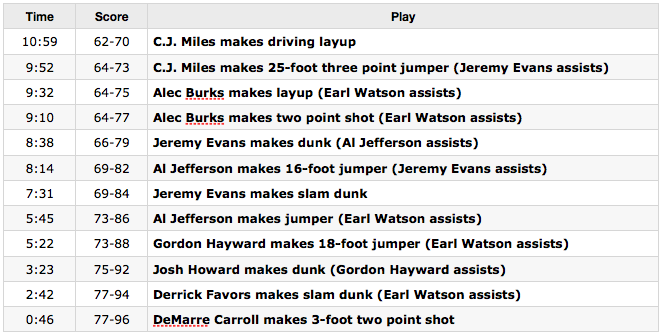 And last night it was so awesome to see the Jazz again return to the True Path of passing, cutting, and screening.

I am convinced that Earl Watson is the guy that holds the team together. Nobody pays attention to the other players' needs, nobody notices what they are doing right, and nobody publicly vocalizes support for them like Earl. Last week he said that he and the team needs to dedicate themselves to getting Hayward and Favors more more consistent and prominent roles on offense. (I've looked for hours where I read this, but I can't find it. If anyone knows let me know—I specifically remember Earl saying Hayward needs to score at least 10-15 points every game. But I can't find the source now.)

Then Earl gets excited about Evans winning the dunk contest (Twitter via Salt City Hoops):

Here's Earl on what Al meant to the win last night (from the Trib):

Watson said Jefferson was the unsung hero for the Jazz, anchoring the team's defense and being very vocal.

"That's the most vocal I've ever heard him since I've been here and it helped us out completely on pick-and-rolls," Watson said.

He's no longer thinking the game, he's just playing it and dictating the pace. And with him pushing the ball — when he pushes the ball, it creates everything else for him. It creates a rhythm. And he's finding that and he's being really effective in transition.

It's rare to find anyone that dedicated to everything good about his teammates. I'm so glad Earl's a Jazzman. And of course he led the team with 8 assists against the Rockets.

Plus the teacher side of me just grins that Earl correctly matches the singular verb (needs) with the singular noun (Jazz). He paid attention to his 4th Grade Language Arts lessons :)

February was a rough month. We went in knowing it would be nasty, and it ended up being pretty nasty. The Jazz went 4-11. In a few wins it could be argued the Jazz overachieved to beat better teams (Lakers, Memphis, Houston). Likewise, in a few losses it could be argued the Jazz underachieved to lose to lesser teams (Golden State, New York, New Orleans, Sacramento). But at least we got to end the month smiling. Thanks CJ, Devin, and everyone who participated in kicking the Rockets' collective butt.

Now comes March. 19 games in 30 days. 12 games on the road. It includes a week they could lose every game (the big road trip starting on Saturday in Dallas). That week is immediately followed by one in which I could see them winning every game (Detroit, Minnesota, Golden State at home, Phoenix on the road).

My personal feeling is that the first real key stretch begins next Monday: at Cleveland, Charlotte, then Philly. If the Jazz can consistently do smart s***, those are three winnable road games (The Sixers have been struggling as of late). But if not ... that will be where a very long, frustrating month begins.

I am very anxious for those particular games.

What do you hope to see both the team and individual players accomplish this last half of the season?

P.S. Read the Earl Tweet again. You never really know what his intent is. I consider myself a quasi-professional writer (not for this blog—for other stuff), and I throw out hundreds of phrases a week with unintended connotations and implications. It's simply a hazard of the writing craft. That disclaimer in mind ... doesn't it read like Earl's calling out one or more teammates for being self-absorbed and indifferent to the needs/wants/goals/successes of each other?

I'll just add that to the list of things I wonder about with a 100% guarantee I will never know the true answer.