Share All sharing options for: The One Where Jody Saw Blake Griffin in the Salt Lake Airport Edition-The Downbeat #705

The Jazz take on the Phoenix Sun's tonight. The standings are really tight in the West, as Ty said its going to be a dog fight for the last two playoff spots the rest of the season. How the Jazz do in the next four games can perhaps determine their playoff or draft picks destiny. 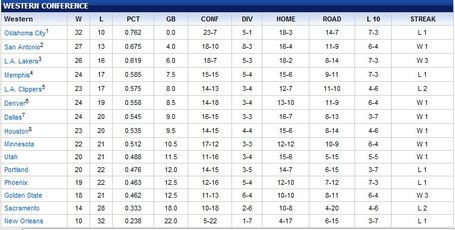 Such a close race the Jazz just 2.5 games out of the playoffs and just a game ahead of sitting 3rd worst in the West.

I have always had a soft spot in my heart for Raja Bell. Last season Raja Bell rented Michael Doleac's house, The Doleac's house just happened to be two houses down from The Allen's house. No no not Lou and my's house (Lou does not yet make enough money to allow us to be neighbor's with an NBA player) but Lou's parent's house.

I remember vividly the day that my mother-in-law called me and told me the news. My mother-in-law called and said hey we have new neighbors (I thought oh exciting I guess) she said I went to take them a welcome basket to welcome them to the neighborhood. I knocked on the door and a beautiful lady with two little kids answered the door (me: cool maybe my kids will now have kids to play with when we're up there).

She continues: I introduced myself and then asked her, her name and phone number for the neighborhood directory. I wrote down her name Cindy Bell, easy enough. I ask her her husband's name, I didn't understand her at first and ask her to spell it so she does " R-A-J-A" (I freak out, are you kidding me Raja Bell is your neighbor!!!) My mother-in-law tells Cindy oh that's a different name (totally clueless to who he was) how interesting, then asks her how long they plan on being in the neighborhood (knowing they were renting). Cindy says they plan on being there for at least three years, the length of her husbands contract. Cindy then told my mother-in-law that her husband Raja plays for the Utah Jazz. .

We were able to see Raja and his family during their time in that neighborhood. Raja was always nice to us, even the first time when I was so extremely excited and kept saying what a huge Jazz fan I was. My kids played with Raja's kids once. (I was not there they were spending the weekend with lou's parents). Raja and Cindy made great efforts to fit in the neighborhood. Anytime Raja drove by he would wave with a huge smile. They gave my kids tons of candy on Halloween. The Bell's even attended my in-law's ward Christmas party, it was at La Caille so not a typical ward Christmas party but still! The Doleac's sold their house so the Bell's and Allen's are no longer neighbors.

Why am I sharing all this? I am sharing this to tell you how much I love Raja but even I think that him getting 28 minutes against Detroit was kind of ridiculous. Raja scored 1 point in those 28 minutes. Ty was asked at practice the next day why Burkes didn't get any minutes, Ty said how it was just how the game flowed, and because of the opponent. Yep our wings did such a great job on Stuckey through the first three quarters I can see how Ty wouldn't want to risk that defense by putting in a rookie. Maybe it was a product of "the meeting" between Ty, KOC and Raja? Maybe just maybe they were show casing Raja...

The trade deadline is tomorrow! Everything hinges on Dwight Howard but for some reason there are rumors surrounding the Jazz this year:

Do any of these rumors get you exited? Why all of the sudden are there so many leaks about Jazz trades when for years you heard nothing? This was one fan's idea:

Our favorite beat writer Jody Genessy may have scooped who the Jazz will get back from the Clippers for Raja Bell:

The trade deadline is always and exciting time but sad at the same time. Ty talked in practice how right now is a very sensitive/hard time for players, he said how he has had to help players focus and not get caught up in the trade rumors, Ty said the rumors do effect players.

Which current player would you miss the most if they were traded by the Jazz?

Which past player were you most upset about when he was traded by the Jazz?