But what happens when they all break out?

Share All sharing options for: But what happens when they all break out?

Last night I was feeling really good. As Co-Captain of the "Play the Kids" club since last April, it has been a lot of fun to see them play so well the last few games. It isn't just that they individually put up nice numbers, but the team played well. The offense was balanced, the individual defense was superb, the team defense was great.

So, of course, I Tweeted about how fun it was: 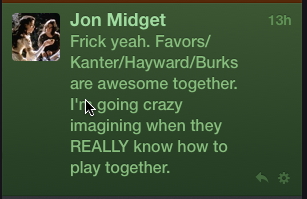 This brought out lots of really good conversations, but one important point was brought up by Jake Jeppsen (of The Utah Jazz Blog):

It's one of the major worries given today's NBA. It's been brought up several times as a problem with having teams built on young guys: they all are due their big pay raise within a couple years of each other, and then the team can't keep them all.

So I decided to investigate this a little more closely

More after the jump

They're always the example, aren't they? I suppose it's inevitable ... considering how they built their team on a bunch of quality kids. Any team doing it will have to watch OKC as a kind of precursor.

Anyway, Durant has already begun his max extension. Westbrook just signed his (which will begin next season). Harden and Ibaka will be up for extensions the year later. Put it together, and there's a "man, can they keep them all?" kind of mutter that goes about.

But do they really have a problem?

Here are their top players, in minutes played: Durant, Westbrook, Harden, Ibaka, Perkins, Sefalosha, Daequan Cook. From that point, you start getting 14-15 minute per game guys. Let's look at them, one at a time.

Sefalosha scores 5.4 ppg, shoots well with a very limited role because his offensive skills are very limited. He does play good D and contributes a bit of this and a bit of that more than Cook. But still ... we're not looking at a huge salary. Not now, not if they extend/resign him, not if they choose to replace him.

Ibaka averages 8.6 points, 7.7 rebounds, and 3.3 blocks in 28 minutes per game. Based on numbers and minutes, his extension would be bigger than Perkins', but not close to a max salary. Let's say $10 million per year.

Harden averages 17 points, 4 rebounds, 4 assists and a steal per game. He's the team's third star. An extension for him would be more than Ibaka's, but less than the max. Say $13 million per year.

Now let's add it up with the Westbrook & Durant contracts:

That's about $65 million without Sefalosha/Cook. This is approximate, since a) nobody really knows what extending Harden and Ibaka will really take, and b) salaries generally up each year. But after 2012-13, the salary cap/luxury tax line will also start going up again.

Yes, they will have a salary crunch. But there are two things to remember: First, once you get past a team's top 5 guys, the remaining roles are limited, and don't matter nearly as much. Second, the team is still slightly under the luxury tax line, and they're dealing with a contract that is way too big for his production: that of Perkins.

Really, paying Durant/Westbrook/Harden/Ibaka isn't the problem. It's the Perkins salary that's the problem. If his salary matched his actual production the salary issue becomes much, much better. It's still tight, but enough money to fill out a roster if the GM is smart.

Back to the Jazz

The lesson from the Thunder, I believe, is that you have to be very, very smart with salaries.

There are other lessons too, though. Mainly this:

The Jazz won't have 4 kids who deserve max contract extensions. No matter how good all four kids are, there aren't enough shots available to put all four in the max range.

I'm going to do a little assuming here:

First, let's say all four kids become everything we hope they can be.

Now let's say that Alec and Favors go nuts and both warrant max contract extensions. A little wrinkle to this is that the more shots these two guys take, the less Hayward and Kanter will take—and despite how important all the contributions are, the reality is that scoring is one of the biggest driving factors for salaries.

So let's say Burks and Favors get the max, and let's look at that in terms of this year's salary cap and tax line (for simplicity, because max contracts, salary caps, and luxury tax lines fluctuate together). Those lines are $58 million salary cap/$70 million tax line.

That's $54 million. Leaving $16 million with which to fill out the roster. If OKC was tight, but doable, then this situation is okay, I think. You can pay your top four guys, your top four contributors, and still have cap room for the rest of the roster.

The key, though, is they can't add a Kendrick Perkins salary. They can't pull an AK, paying a guy max salary then pushing him into a secondary role. They can't throw out Matt Harpring contracts. They have to be very smart about filling out the roster with the rest. They need to find 2nd round pick/undrafted gems.

As long as they can do this, they will be just fine.