So going into today's game against Miami (first in the East), the Jazz (16-18) are 11th in the West. We are 1.5 games out of 8th place, but also 1.5 game out of 13th. At this point, the Jazz wouldn't even be in the Playoffs if they were in the Eastern Conference. After the Miami game, we head out on a five-game road trip and play six of our next seven on the road...where we are 3-12 on the season. Ouch.

Ty almost did too good a job early in the year...There's a bunch of factors that make this really interesting. If you isolate the big guys, with Kanter and Favors kind of seemingly being the future, with really high-level players right now in Jefferson and Millsap, you look at Oklahoma City in the way they built their team and you look at Portland the way they did it. None of those teams had comparable guys like Millsap and Jefferson, who a coach could look at and say, "I gotta win tonight. These guys give me the best chance to win." They just cleared the deck and left those youngsters out there to sink or swim. That's what I think has really changed this dynamic so much and made it difficult for Ty. At the same time, I think it was clear to Ty by the end of All-Star break that his main guys, Millsap and Jefferson, were worn out a little bit. So he really is mixing and matching at a different level than maybe any coach in this situation has done before.

Agree/disagree: 1) Kanter and Favors are "kind of seemingly" the future of this franchise. 2) That the presence of Millsap and Jefferson on our team, which everyone including the players say has no superstars, makes us different than other rebuilding teams that have had a bunch of young guys, and/or that having Millsap and Jefferson make us a win-now team. 3) That Millsap and Jefferson's sporadic play of late is because they are worn down. Other possibilities I've seen mentioned include being scouted more, disadvantageous matchups, mental/emotional issues from not making the All-Star Game, etc. 4) Tyrone Corbin's mixing and matching: the likes of which have never been seen before. (Above quote from David Locke)

I don't know how many of you have been to Al Jefferson's website, but it has a couple of really cool features. In "You vs. Big Al," you can compare your hand size to Al's. You can also input your height and see how you measure up against Al and different animals including a whale, giraffe, dog, etc. I seem to remember that this got some pub on NBA blogs when it first came out, but he wasn't a Jazzman then. Here's Al's hand in actual size (click to enlarge, obviously. Also, if your browser shrinks large images you might need to click on the zoom icon that appears): 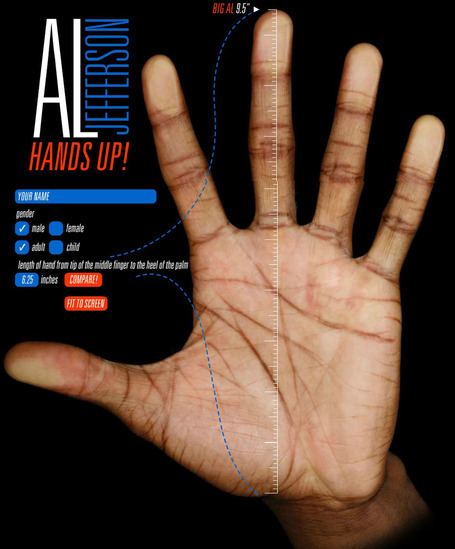 As the lockout dragged on from summer to fall to winter, we got madder and madder at the fatcat owners and greedy players arguing over money. We made threats. We said we'd boycott games. We said we'd had enough and we were done. Then the lockout ended, and we all came crawling back as quickly as our NBA-starved limbs would carry us. Randy Rigby on All-Star weekend exec meetings (KFAN):

There was literally* not one person who made a comment in any of our meetings of even alluding back to what we all went through literally** three months earlier. It's really moved past that very quickly, and moved on to the game of basketball. It's a compliment to the players' association as well as to the owners and the NBA itself.

* Yes, he said "literally" like Chris Traeger. ** Not the second time around, though. I personally think it's a compliment to the fans for continuing to love the NBA, but the fact that team executives don't feel that way shows just how quickly and eagerly we came running back.